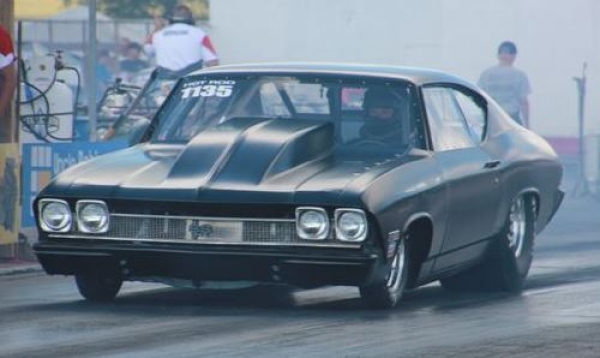 NEW YORK (January 17, 2016) Jason Vitez and JJ Jablonski teamed up as co-drivers this year and earned themselves a second place finish in the 2015 Joe’s Transmission TNT Super Series.

Both drivers are former champions in the highly competitive 10.90 series so it was no surprise to see them near the top of the standings as a team. 651 points had them in contention right up until championship weekend.

Vitez’s Lancaster win in Jablonski’s Nova at race 5 moved them up to third from seventh in the points standings. Then Jablonski held them there through race 8 when Vitez posted a runner-up finish at Empire’s Pro Am and set them solidly in second place.

“Well the year didn’t start off as planned,” said Vitez. “But teaming up with my best buddy JJ was great. As I was going to miss the second race and he missed the first, it was the smartest thing to do.”

“Driving his car and winning in it was also pretty cool,” he added. “I finally got the Chevelle out at the Empire divisional and a runner up finish was pretty amazing too. All in all it was a pretty good year.”

Vitez was quick to thank to MSD, Hoosier Tires, Royal Purple, Auto Meter, Reeactor Trans Brake Switches, Jiffy-tite, Competition Transmission and Jan-Cen Motorsports for their help. “And of course the boys back at shop for getting my car done. Can’t wait to next season!”

JJ Jablonski – photog Neffke Motorsports PhotographyFor more on the most competitive sportsman drag racing series in the country and to learn how you can get involved, visit www.tntsuperseries.com .

Since it began in 2006, the TNT Super Series has grown into one of the strongest, most competitive sportsman drag racing series in North America and has catapulted many competitors to success on the national and divisional stages.

The TNTSS is a self-governing organization with input from its teams. Based on NHRA’s Super Street & IHRA’s Hot Rod classes, competitors run on a 10.90 index in the 1/4 mile (7.00 in the 1/8 mile) and race for a guaranteed purse that pays back more than 100% of the racer’s entry fees. The yearend points fund provides cash & prizes to the top eight finishers and the Series Champion receives a prize package worth over $4000.00.

The TNTSS is committed to providing the highest level of competition backed by solid media support to showcase its participants across North America. Events are contested at various drag racing facilities in southern Ontario and western New York and put on a spectacular show for the drag racing fan.

Joe Boniferro has owned and operated Joe’s Transmission Service in Niagara Falls, Ontario since 1984. From the original single bay location, the business has progressed to a six bay, five employee automotive complex on Arthur Street. The two storey building houses Joe’s Transmission (Commercial, Fleet and Performance Divisions) and Al’s Radiator Service. They sell and install aftermarket high performance parts and accessories. As a Firestone Dealer they sell and install drag racing tires. Their specialty is building and repairing high performance transmissions. Contact Joe and his team at (905) 374-6116 or visit them online at www.joestransmission.com .