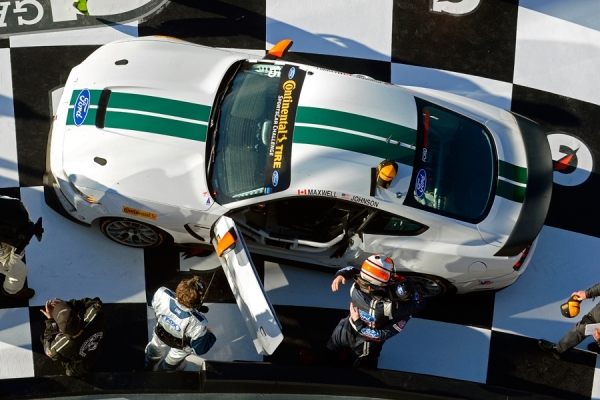 Johnson and Maxwell started third out of 37 production-based sports cars (eight in the Grand Sport class). They claimed the GS class and overall title, beating the second-place Ford Shelby GT350-R-C of Paul Holton and Pierre Kleinubing by 2.328 seconds. The duo of Daniel Burkett and Marc Miller, driving a Porsche Cayman GT4, rounded out the podium.

“It was great to see two Ford Performance Shelby GT350-R-Cs on the podium – for all the hard work everyone has done,” Johnson said. “It’s the first time this car has made it to Daytona International Speedway, and I’m really happy for it to be in victory lane.”

The victory marks Johnson’s fourth win in the Continental Tire SportsCar Challenge. For Maxwell, it is the two-time CTSCC Champion’s third series win at Daytona.

The Street Tuner (ST) class was won by Jeff Mosing and Eric Foss in a Porsche Cayman. Finishing second were Nick Galante and Spencer Pumpelly by 0.324 seconds. Brothers Juan Carlos Leroux and Jorge Loreaux completed the podium with their Honda Civic Si.

The No. 0 Panoz DeltaWing Racing DWC13 Prototype made team history today, posting the fastest lap of today’s final practice session for the Rolex 24 At Daytona – 1 minute, 38.59 seconds/129.993 mph. This is the first time in the team’s four-year history that the car has topped an event practice session.

On Thursday, the exotic entry completed nine total laps in three practice sessions due to inclement weather; in the fourth and final practice session, the car completed 22 laps on the 3.56-mile road course, leading the pack in drier conditions.

“It’s not supposed to rain [for the race], so we weren’t too worried about speed in the rain,” driver Katherine Legge said. “We’re just worried about getting through the race – reliability. We’re fast for sure. Hopefully we’re reliable.”

Prior to Friday’s solid performance, DeltaWing – co-driven by Legge, Sean Rayhall, Andy Meyrick and Andreas Wirth – opted not to qualify for the Rolex 24 on Thursday. The team will start in the back of the pack. Legge said the team is “very disappointed” having not qualified, but Thursday was used to check over the car, emphasizing the importance of reliability for the 24-hour race.

“It’s going to be interesting for [the media], I guess,” Legge said. “Our biggest nemesis [last year] was always the transmission and the gearbox but the engine always seems to be super strong. Not to jinx ourselves, but I think we’re a lot more reliable although we haven’t done any 24-hour testing [so] it remains to be seen.”

A Nissan BR01 driven by Mikhail Aleshin was the fastest-qualifying Prototype on Thursday, and will lead the 54-car field to the Rolex 24 green flag Saturday at 2:40 p.m.

Tickets for the 2016 Rolex 24 At Daytona weekend can be purchased online at www.daytonainternationalspeedway.com or by calling 1-800-PITSHOP.