By Joe Dunn / joe@onpitroad.net
DARLINGTON, SC— For the second week in a row, a NASCAR night race was held over to be run the next day. This time it was Jeff Gordon and the DuPont Chevy in victory lane for Hendrick Motorsports.
In typical Darlington fashion, nearly every car on the track at one time or another make contact with the wall Except Denny Hamlin, who ran a near flawless race leading 179 laps, only to be deprived once again of a win by a bad pit stop. Two missing lug nuts caused Hamlin to be shuffled way back in the field. With a determination and drive he managed to pull off another second place finish, but was just unable to get by Jeff Gordon for the win.
For the better part of the 367 laps the same small group of cars were consistently at the head of the pack. Jeff Gordon, Denny Hamlin and Jimmie Johnson, who scored 1-2-3, stayed in the top 15 for 364 laps.
Other drivers running up front most of the day included Ryan Newman and Carl Edwards who rounded out the top five. Followed by Tony Stewart, Matt Kenseth, Dale Earnhardt Jr, Clint Bowyer and Jeff Burton, sixth through tenth.
Being the Mother’s Day weekend, several drivers were introduced before the race along with their mothers. The class of the field at the driver intro, was Jeff Gordon, who was the lone driver to stop on stage with his mother to pose for pictures.
Because of the second rain delay in a row, a Car of Tomorrow test scheduled for Monday and Tuesday at Dover, De. Was cancelled. Kerry Tharp of Nascar informed the media that Nascar would contact the teams to determine a reasonable make up schedule for the missed testing session.
Also the ‘Big buzz’ at Darlington was the speculation of what will become of Dale Earnhardt Jr.’s future in the wake of his announced departure from Dale Earnhardt Incorporated. Several teams were mentioned over the weekend, but Bobby Ginn of Ginn racing so far is the only one who has announced that he will actively pursue Junior for one of his Nextel Cup teams. 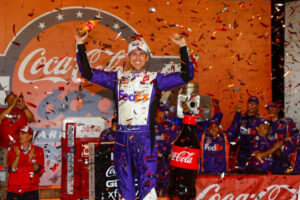