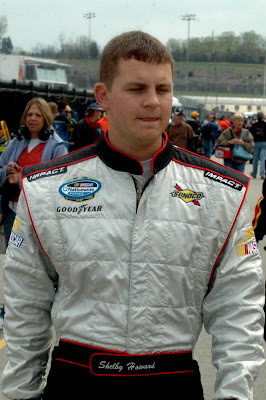 Shelby Howard of Greenwood, Indiana got the call last month to replace Mark Green in the from ML Motorsports Nascar Nationwide Series #70 Foretravel Motorcoach Chevy. The call came on the heels of a parting of the ways between the team and Mark Green, who was in his third season with ML Motorsports.
Green had missed the last race at Homestead last year, but rallied back and made the race at Daytona in February. The team had skipped the west coast races, so they were looking forward to a good run at Bristol. When they failed to make the Bristol race, it was decided that a change was needed, and the call went out to Howard.
Team owners Mary Louise Miller and Stephany Mullen had known Howard from the times they competed against him in the ARCA series a few years back. Howard made his start in the ARCA/REMAX Series in 2001 at the age of 16, making him the youngest driver to compete in the series, he was also the youngest winner in the ARCA series in 2003.
Shelby got his first start in the Nationwide Series in October of 2003 driving at Kansas for Mike Curb in the 43 Dr Pepper car. Over five years, prior to joining ML Motorsports, Howard has competed in 11 races in the Nationwide series with a best finish of 18th. Last year, he drove for Thorsport Racing in the Camping World Truck Series, finishing 17th in points. When Thorson didn’t return to the series for 2009 it left Howard without a ride, again.
In his first outing in the Foretravel Motorcoach Chevy, Shelby managed to finish 32nd after a couple of untimely flat tires. Two weeks ago he showed a lot of promise with a 14th place finish at Nashville. The team, which only plans to run 18 races this year, will be at Talladega for the Aarons 312 on Saturday.
The run at Nashville proved to be a real morale booster for the team as a lot of smiles were visible during and after the race. The team returned to their shop in Warsaw, Indiana after Saturdays race to prepare for Talladega. It’s still a bit early to predict the results of the driver change, but hopes for a positive season are alive and well in Warsaw, Indiana.