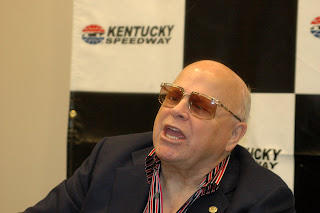 Everybody knows that Bruton Smith wants a NASCAR Sprint Cup Race for Kentucky Speedway. And when he told reporters at the track Saturday that he would add 50,000 more seats and move pit road, it was no surprise. Still Smith remains mum on where he will take a race date from to put Kentucky on the Sprint Cup schedule.

But what was not addressed in his abbreviated press conference was some of the other ideas he has for the track. While answering questions from a reporter for the Owenton News Herald, a local paper, Smith posed his own question. One that revealed another look at his intentions. “Don’t you think this state needs gaming?” he went further to point out the close proximity to a Casino in Indiana and the benefit’s a casino would bring to the area. He began to say that the area needed another Hotel/Casino, but quickly caught himself, changing that to a Hotel only. Surely a spot on the Speedway property for a Casino would be easily found.

The area needs an airport according to Smith, one with at least a 6500’ runway and plenty of parking for planes. How many planes is he talking about? “We have one in Atlanta, at Atlanta Motor Speedway, and the most planes they can park is 272.” said Smith, “After that, they have to wave them off.” He hopes that the local government will keep that in mind and listen to and heed some of his advise for the area.

Bruton never does things small, and adding a Casino and Hotel to the Speedway site would mean a year round operation for the facility. The man who pioneered the Race Track Condominiums would certainly consider one at a track with an onsite casino. His obvious pitch to the locals, would be benefits that mirror what his projects have created elsewhere. Texas Motor Speedway is one of his proudest accomplishments, as he talks about that area before he built the track. Speaking of local officials in Kentucky Smith said, “They could go to Texas, and Texas Motor Speedway, and look around. I built that place and it was nothing but weeds, there was nothing. They could look around there and see what‘s happening as a result of the Speedway”

He didn’t mention it in this conversation, but SMI is emerging as ‘The’ promoter in Drag Racing. The addition of the Dragway at Lowes Motor Speedway was an instant success, and unlike Nascar, the fan base in Drag racing is growing. Surely it’s location would make Kentucky an ideal candidate for SMI’s next Dragway, joining the ranks of top facilities including Bristol, Texas and LasVegas.

When the subject changed to the NASCAR Sprint Cup banquet, to be held for the first time, this year in LasVegas, a wide smile brimmed across his face. It was a long time coming and it is no secret that Smith was pushing for it. “ I can’t take the credit for the change, but I did push for it.” Smith chimed in. On the idea of changing the last race of the Chase to LasVegas, to coincide with the banquet he was pretty subtle. “ I’m working on that, but NASCAR is not going to ‘give’ me a race.” He remains tight lipped on the source of that race date, but he does indicate that he has no intention of simply ‘moving’ the track’s lone date to accomplish it.

On Charlotte, Smith puts the city high on a pedestal in the racing world. “Charlotte is the Hub of racing, if your racing anything today, whether in this country or Europe, chances are you will have to touch Charlotte.” But Charlotte is not the only thing on his plate and the United States is not the border of his dealings. He’s been talking with folks halfway around the world about racing. Bruton let it slip that he’s meeting this week with some Arabs from Saudi Arabia. “We may build a couple of Speedways over in Saudi Arabia.” said Smith “ We’re meeting this week and if we get a contract we’ll be building some speedways over there.”