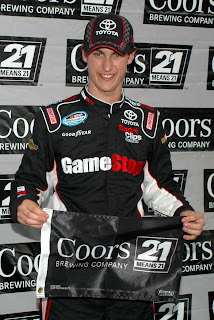 Qualifying for the NASCAR Nationwide Series race at Kentucky began at 4:05 pm, as the weather remained clear despite threats of rain.  Like Brooklyn Michigan, Sparta, Kentucky  was under a serious rain watch as prediction  as high as 90% was suggested by some weather sources.  A brief early afternoon shower gave way to clear skies, along with high heat and humidity.
Rolling off second  for qualifying was Trevor Bayne in the No. 99 Toyota who went right to the top.  He withstood challenges from points leader Brad Keselowski and former champion Jeff Green, but it was Coleman Pressley in the JR Motorsports No. 88  quickly replaced Pressley. Brad Coleman, went out thirteenth and set a fast lap of 30.858 for a speed of 174.995 taking the provisional pole. Teammate Joey Logano came out 26th and blistered the field, with a lap of 30.472 for 177.212 mph.  That proved to be the mark that could not be beat.
With the Gibbs cars starting one, two, it is Penske Racing’s Justin Allgaier starting third with Rookie Josh Wise in the JR Motorsports No. 7, and Scott Riggs in the RCR No. 21 rounding out the top 5.  Mike Bliss (33), Reed Sorenson (32), Paul Menard (98), Pressley and Carl Edwards (60) complete the top 10 starters for the race.
Kenny Hendrick in the No. 52 Quaker City Castings, Chevy and Brian Keselowski in the No. 26, K-Automotive Motorsports Dodge will miss the race after failing to qualify on time.
The Meijer 300 at Kentucky Motor Speedway goes green at 8:00 pm, telecast live on ESPN and PRN radio.