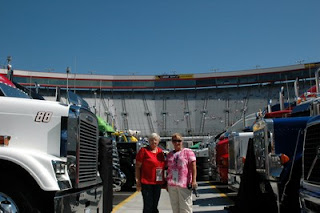 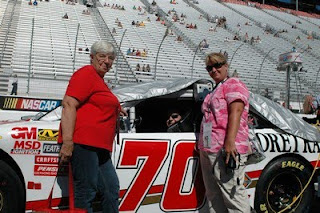 As the Nationwide cars lined up for qualifying, they joined the team on pit road to wish Shelby Howard good luck on his qualifying effort.  With the #70 car off, they worked their way down pit road, snapping pictures of several drivers along the way.  Working their way back to the Nationwide garage area, Barbara was surprised when she was introduced to and asked to pose for a picture with her first winner, Morgan Shepherd. 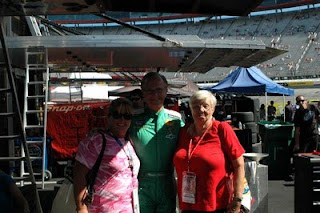 To their complete surprise, team members invited them to join them on the front stretch of the track where they got to be front and center for driver introductions. Come race time, mother and daughter found themselves the guest of the #70 ForeTravel Motor Coach team in their Pit area, where they had highboy chairs behind the pit box.  Interacting with team members, they got to know each one and their duties.  During the race, they were both invited to sit on top of the pit box with crew chief Chris Rice.  Barbara declined, due to a bad knee, but Tiana wasted no time in accepting the offer and climbing topside. They remained with the #70 throughout the race, and then headed to the end of pit road to see the drivers as they exited their cars and headed toward the haulers. 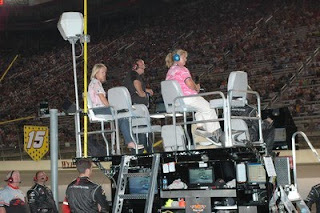 Saturday afternoon they returned to the track to take their place as ‘normal’ fans for the NASCAR Sprint Cup race festivities.  But to each of them, they will never again be ‘normal’ fans. Tiana summed up the weekend and especially their Friday as “An incredible experience that I will never forget.”  Barbara said,” I really enjoyed the races, the whole weekend was Fantastic!” “The ML Motorsports team really treated us like Royalty” said Barbara “This whole experience was really much more than I could have dreamed for, and the fact that this was the result of efforts by so many people to help the Nashville Flood victims made it even better“
Barbara and Tiana are not sure just which races they will attend next year, but you can be sure they will be at Nashville SuperSpeedway on April 22 and 23rd.