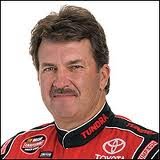 “I’m thrilled for the opportunity to have Mike Skinner drive for us at Daytona,” said team owner Eddie Sharp. “To have someone of his caliber drive for our young truck program is exciting. I have known Mike for many years, and I am thankful for his trust in our program and his relationship with Toyota. I’m really looking forward to working with him.”

The former NASCAR Camping World Truck Series champion will compete for the eighth time at the 2.5-mile speedway in the NCWTS.

“Eddie Sharp and I have been friends for a long time, and I have watched him win big in the ARCA Racing Series over the past few years,” said Skinner. “He came to me a few years ago and told me about his goal to move into the NASCAR Camping World Truck Series. I think it is exciting to be able to work together and help him accomplish this dream in his first full season in NASCAR.”

Skinner will continue to drive a Toyota Tundra with Cushman on board as sponsor. Cushman vehicles are used worldwide to transport personnel, materials and equipment at manufacturing facilities, warehouses, resorts, and other commercial and industrial facilities. Cushmanbrand and product lines are owned by Textron, a global multi-industry company based in Providence, R.I. Cushman is a sister brand to such powerful brands as Cessna, Bell Helicopter, E-Z-GO, Greenlee and Jacobsen. 2011 marks the 110th anniversary of the company.

“I’m excited to have Cushman on board for Daytona, and I’m ready to get on the track,” said Skinner. “We are currently working on sponsorship for the rest of the season, and I really hope that we can put together something to be able to run the full NCWTS schedule. I have a great relationship with Toyota, and we have really helped each other throughout the years- good and bad. It is a win-win situation for both myself and Toyota, and through our relationship, we are able to work with people like Eddie Sharp.”

“I’m excited to have the opportunity to work with Mike Skinner,” said Hodges. “We’ve prepared a great truck to bring for Skinner, and it’s going to be a great opportunity to work with a driver that has such stature and knowledge. His experience will accelerate our learning curve in our first year in the series, and I really am looking forward to working with him.”

Skinner will join Craig Goess in the ESR lineup at Daytona International Speedway. Goess, a NCWTS rookie, will drive the No. 46 Greenville Toyota of N.C. Tundra in the event.

The green flag waves on the NextEra Energy Resources 250 on February 18th at 7:30 p.m.  For more information, please check out www.teamesr.com, www.facebook.com/teamesr and www.twitter.com/teamesr,