After a whirlwind media tour that gave the 2011 Daytona 500 Champion Trevor Bayne little time to catch his breath, he finally got some time to relax at home with his parents Monday morning. Of course that visit was rather short as he was whisked away to the Knoxville, TN Civic Center that afternoon for a special ‘Homecoming Celebration” orchestrated by the folks from Bristol Motor Speedway.
The event, originally planned for an outdoor market area was relocated to the Civic Center due to the threat of rain.  That threat rang true and heavy rains on Monday caused massive flooding throughout sections of downtown Knoxville. Although the flooding caused many streets to be closed, hundreds of fans still made their way to the event.
ESPN’s Dr. Jerry Punch MC’d the event as he warmed up the crowd as they waited to greet their newest 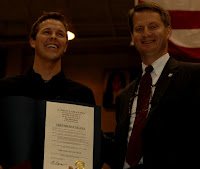 Hometown Hero, Trevor Bayne.  In addition to Punch’s review of young Trevor’s racing accomplishments leading up to his historic Daytona 500 win, the mayors of Knox County and the City of Knoxville heaped praise on their native son, both issuing proclamations of ‘Trevor Bayne Day’.
As the Bayne family was introduced, it was obvious that his parents, Rocky and Stephanie were doing all

they could to hold back the tears, as the crowd cheered and welcomed them. Missing in the original introductions of the family were Trevor’s grandparents.  A short time later they were given a roaring reception as the crowd was informed that their tardiness was due to the fact that they had made the extra trip to bring Trevor’s ‘Harley J Early Daytona 500 Trophy’.
As Trevor, along with Eddie and Len Wood hoisted the trophy overhead on the stage, the expressions on their faces told the whole story.  This was a timeless moment for all

involved. As the onstage program came to a close, Trevor headed toward the crowd where he shook hands with, had photos taken and signed hundreds of autographs.  I’m not sure who enjoyed that more, the fans or Trevor.

Throughout his expression of gratitude to the Wood Bother’s, Jack Roush, Ford and all the team members who were a part of putting him in the best equipment he could dream of, Bayne constantly talked about his faith.  He made it clear to everyone that first and foremost he attributed his success in racing to God. He spoke softly as he talked about the efforts of his parent and his business manager as they developed a plan to establish Bayne in the NASCAR world.  “I told them, this was all good, but we must first adhere to our ‘Platform’.” Bayne explained, “ Our Platform of putting 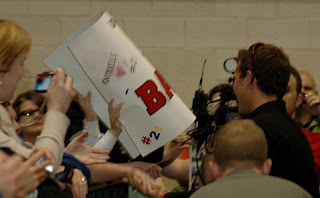 God above all and letting our faith lead us.”  This of course comes as no surprise to this writer as I have heard him utter these sentiments repeatedly in the 2 years that I have been dealing with Trevor at the various tracks.
In speaking with Eddie Wood, he expressed his appreciation for the efforts of Trevor, Ford motor Company and Jack Roush. “We were in a slump and we approached Ford to seek their help and support.  They have always been a strong supporter of our family and we owe them a lot. Ford didn’t hesitate enlisted the engineering expertise of Roush-Fenway Racing.  The deal was made to Bring Trevor in and after meeting him we took an instant liking to him.” Eddie was really sold on Bayne, “The more we talked with  him, they more he reminded us of David Pearson, so we knew that we had to get the two together.  Trevor has such a calm and relaxed manner about him, much like Pearson.”
With the pairing of Bayne and Pearson, the Wood Brother’s felt the idea of a retro type paint scheme on the #21 car, going back to Pearson’s win at Daytona was just a natural thing.  “If it’s at all possible, I want to keep that paint scheme for the entire season.” Eddie explained, “ That scheme and the win at Daytona was the best tribute that we could have given to my dad and uncle.”
The win at Daytona automatically qualified Bayne for the NASCAR ALL STAR Race for both 2011 and 2012 and they would love to have the #21 car there, and the brothers are working on a deal with RFR to be there.
Looking forward to returning to Bristol in a couple of weeks Trevor looked back to his first NASCAR start at the track.  It was in the spring of 2009 as he had a one race deal in the NASCAR Nationwide Series #52 car of Jimmy Means. “ Yea, a lot’s changed since then.” laughed Bayne, “ That was something that we threw together last minute, with a lot of volunteer help.  We had a lot of people who just jumped in because they love racing and wanted to help us out.  It was not a terrible race for us, and then later I got a chance with Michael Waltrip Racing and Gary and Blake Bechtel and then Jack Roush picked up on it and carried us to the Wood Brothers. You know, I’ve had a lot of support to get to this point.”
As the fans began leaving the Civic Center, Bayne remained behind continuing to meet with and talk with the fans.