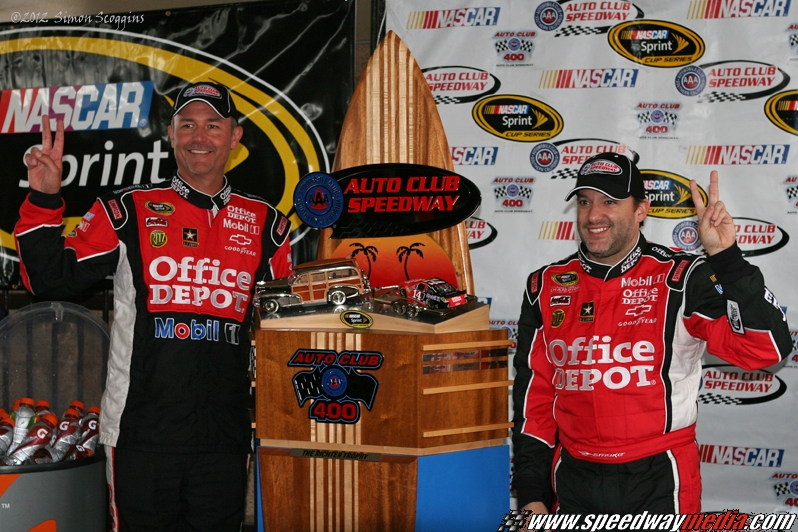 When the caution came out for rain on lap 124 of 200, teams had the tough decision to make – to pit or not to pit. Tony Stewart, who was leading the race, decided to stay out while second-place Denny Hamlin pitted. The decision was the right call for Stewart as the rains came and he was crowned the winner at Auto Club Speedway.

“Just really excited about it, obviously,” Stewart says. “I mean, you hate to have them end with rain like that.  But I’ve lost some that way.  The good thing is we didn’t back into the lead because we stayed out, the leaders came in.  I mean, we were leading the thing and had earned that spot.  Proud of that.”

The win for Stewart marks his second win of the season in five races. Other teams, like Harvick and Johnson, pitted also, knowing they’d be good to go if the rain continued.

“I feel bad for Denny and Darian, to have a car that strong,” Stewart continues. “It was a hard call.  I know it was hard for Steve and for all the other crew chiefs.  We’re kind of sitting on the west edge of the cell, it looked like it was all going to go north.  We just kind of caught the edge of it, but you didn’t know if it was going to go away or keep building.  You hate to see guys lose spots like that that pitted.”

Kyle Busch would finish second after leading 80 laps early in the race, before Stewart took the lead on lap 108 after the third cycle of pit stops.

“It was really good for us,” Busch says. “We had a great racecar there from the beginning of the race.  Got the lead from Denny after the first lap, led a lot of laps.  I just wish we led 30 more and we’d be in a different position right now. Had a great car.  The Interstate Batteries Camry was fast.  Can’t say enough about those guys, Dave and everybody, for putting together a really good car this weekend.  Wish we would have been able to race the whole thing on one hand, but on the other hand I’m kind of glad we’re not because we kind of have a little bit of damage that slowed us down there about 20 laps ago.

“All in all it was a really good day.  Glad we were able to run that way and up front like we’re supposed to and to our potential, that we had a day where we didn’t have attrition or something else get in our way.”

The battle for the lead between Stewart and Busch was tight as Busch was trying to put Juan Pablo Montoya a lap down.

“When you’re the leader, those guys, they’re not very courteous,” Busch says, speaking of Montoya. “They don’t give you much room.  They try to take away your air.  My car wasn’t that great in traffic anyway.  I found that in practice yesterday driving it in practice.  I didn’t think it was going to be that bad.  I tried going low on him, he kind of pinched me low, then I tried going high and he kind of drifted up a little bit.  Mirror driving me.”

“We made up a lot of ground on Kyle I think in traffic,” Stewart mentions. “Kyle was really, really strong I would say the first 10 laps of a run.  It seemed like after that we were able to make up ground on him.  At that part of the run, we had caught a lot of lap traffic at that point.  I think our car was just a little better in traffic than his was at that point of the race.”

Dale Earnhardt Jr. would finish third after the pit strategy as he had been slowly working his way up through the field after starting 14th.

“We had a really good car,” he says. “The car was really quick in practice at the end of the day yesterday.  We carried the same car into the race.  I was real happy about that.  We started off moving forward.  Had some really good pit strategies, pitting a little bit earlier than most guys.  Steve brought us down pit road and we gained a little bit of time, passed some guys on pit road. We drove the car up to fifth before the weather came.  We had been watching the weather all day.  We felt certain if it started to rain it wasn’t going to stop.  We made the right choice by staying out and building ourselves into the top three.”

Kevin Harvick and Carl Edwards would round out the top five. Greg Biffle would finish sixth, followed by Ryan Newman, Martin Truex Jr., Kurt Busch and Jimmie Johnson. Johnson’s team got lucky as under the caution was rain, they had realized that they had an oil leak. If the race would’ve gone back green, they would’ve gone a coupe laps down fixing the problem.

“It’s just a wild change of events because when I came to pit road and took four tires, I wanted it to dry up real quick,” Johnson says. “Now I’m sitting here praying for rain. As I’m sending these signals to the man upstairs, he is really confused as to what I have been asking for.”

Denny Hamlin would finish 11th after choosing to make a pit stop.

“We were planning on the race going back to green, and if it doesn’t, we’ll lose some spots, but if we chose to stay out there, we would have to be behind all the cars that pitted (if the race restarted),” Hamlin says. “(In that case), your chance of winning decreases greatly. So you could give up a few spots if it finishes up here and lose a chance to win in the grand scheme of things . . . We had finally gotten to (Stewart’s) bumper when the rain came.”

There was only one caution on the day, which was the caution for rain at lap 129.