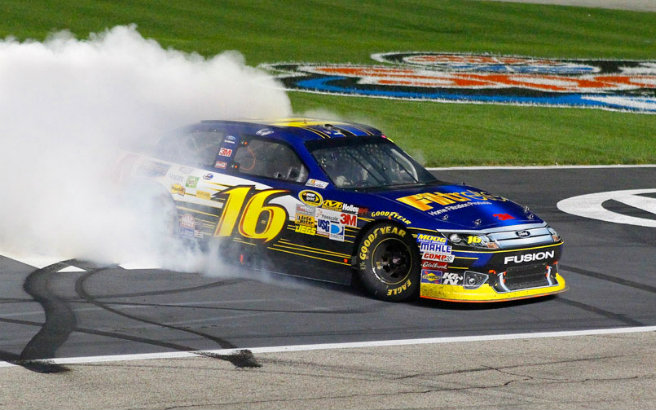 So far this year Greg Biffle had done everything right, except win. That all changed on Saturday night as he led 90 laps on his way to winning the Samsung Mobile 500 at Texas Motor Speedway.

“I’ll tell you what, I could say it’s about time, but hard work pays off still today, and that’s what this is about,” Biffle says. “The team and Matt Puccia putting together the guys he has, the engine shop, how hard they’ve worked on the fuel injection and the engines and all that.  I am just thankful to get the opportunity to drive these cars as fast as they are.  We knew it was a matter of time we were going to win one of these things.  We’ve been running so good.  We had great pit stops, we’ve had good cars.  Vegas we were off a little bit, and that ate at us a little bit because that’s a good track for us.  So we came here and really focused on our car to get it driving the best we could.”

The 17th win of his career allowed Biffle to end a 49-race winless streak that dated back to October 3, 2010 when he won at Kansas Speedway.

With 30 laps to go, Biffle was able to catch Jimmie Johnson in traffic and pass him for the lead.

“I’ll tell you what, catching the 48 car at the end, I had to dig deep,” Biffle comments. “It was all I had to be able to get to him, and it seemed like when I got to him it was too easy.  I don’t know if he used up his tires or the traffic — he had trouble, I think a little bit of trouble in traffic.  That’s when I could close in on him.  But over all it was a good night for us.”

Johnson would come home to finish second despite getting into the wall with 15 to go for his fifth top five of 2012 after leading 156 laps.

“I wish we could have won,” Johnson says. “We were in contention, had a great race car.  Pit stops were just amazing all night long.  Car was great.  You know, at the end the 16 — really probably the last two or three runs the 16 and I were pretty equal, run pretty similar lap times, and right before the last pit stop I got caught in some traffic, he got to me and came out of the pits and was pacing him and had a second half lead and then we caught traffic, some guys were multiple laps down that didn’t show much respect to myself, the leader, and before I know it 16 was there on the side of me and got by.”

Mark Martin would finish third to continue the hot streak that Michael Waltrip Racing (MWR) has been on early this season.

“I am just so proud of MWR and all the people there and the teamwork that they have shown there starting with Martin Truex, Jr., who has put so much work into getting the program where it was when we started the season and everybody combined,” he says. “They really have a lot of great people there with great attitude, great teamwork, and man, have I got one awesome crew chief in Rodney Childers.  This is so much fun and such an incredible privilege to drive a race car at this point in my career, to be able to drive a race car for a team like that and in a hot rod like that.

“I could see the leader the whole race, and at times we could gain — when we were at our very best we were making some gains on the leaders, and when we were at our worst we were falling back some, and most of the time we could kind of maintain pace.  We don’t have much more work to do, and we can get up there and be battling for the win.  So I’m really proud of the guys.  We’ve made improvements on our racer every race that we’ve got to run together, so Rodney and I are starting to figure some things out in the car that I like for the long haul.  So it’s working well.”

The race was the quickest in Texas Motor Speedway history with an average speed of 160.577 and had the fewest cautions ever with two for 10 laps. The first was for Trevor Bayne getting into the wall, while the second was for debris.