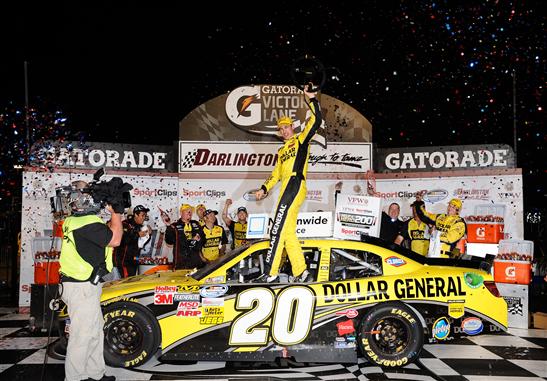 With 10 laps to go, a caution came out for Brendan Gaughan getting into the wall. The caution would set up an action-packed finish to the checkered that had an effect on the Nationwide Series points.

Coming to the green with six laps to go, Elliott Sadler, who came into Dalington as the points leader, led over Denny Hamlin. Joey Logano, who was behind Sadler, gave him a bump to try and get him in front of Hamlin. However, instead, turned Sadler up across the track into the outside wall. Kasey Kahne would wreck behind them.

“He bump drafted me, trying to get us going,” Sadler, who finished 24th, says of the incident. “I just hate it. Fighting for my life out here, trying to win a championship and do well. I’m just bummed out right now…….I understand what he was trying to do, but you just don’t bump draft everywhere you go, especially at Darlington when people are on used tires. It’s just going to make it another uphill battle.”

“Tell him I’m sorry,” Logano immediately said across his radio. “I didn’t mean to do that at all.”

In the process, Hamlin would get by Logano and restart as the leader on the green-white-checkered restart. However, Hamlin wouldn’t keep the lead as Logano would get a bump-draft past him on the restart from Brad Keselowski.

Logano would go on to lead the final two laps to win the VFW Sports Clips Help A Hero 200 for his 12th career Nationwide Series victory.

“I need to apologize,” Logano says. “I got into Elliott. Obviously, it wasn’t on purpose. We worked so well in Talladega last week. I pushed him ahead on the restart before and got him out front, and I was trying to do that again.”

Hamlin, who led a race high 103 laps, finished second for his fourth top 10 finish of 2012. Hamlin said that he was down a cylinder near the end and that’s why he wasn’t able to get a good restart.

Keselowski would finish third for his second top 10 at Darlington in six starts on the 1.366 mile oval.

“This is a short race here at Darlington so you know at the end you’ve got to really fight hard,” Keselowski says. “You don’t have a lot of laps to get it done earlier than that.  I’m proud of our effort with the Snap-on Discount Tire Dodge to get a solid finish out of it.  We want to win these races so we’re going to keep pushing but this is still my best finish at Darlington and that’s progress and thankful for the hard work by everybody on my team.”

His Penske Racing teammate Sam Hornish Jr. would finish fourth while Austin Dillon was the highest finishing rookie in fifth.

Ricky Stenhouse Jr., who took over the points lead as a result of Sadler’s problems, finished sixth.

“It was frustrating,” he says. “It was a good points night because they had a bad night and not because we had a good one.”

Brian Scott finished seventh, followed by Kurt Busch, James Buescher and Cole Whitt. Whitt had to start at the back after crashing during qualifying.

Danica Patrick would finish 12th in his first ever race at Darlingon Raceway while Travis Pastrana finished 17th.

After having a solid finish in his rookie debut at Richmond, Ryan Blaney wouldn’t be so lucky at Darlington as he would wreck on lap two after getting loose.

“I got to apologize everybody at Tommy Baldwin Racing,” he says. “They put a lot of effort into this car for me this weekend. I don’t know, I got loose there and wasn’t able to catch it, so all my fault. Thanks to everybody for the effort. Hopefully they put it all back together and we head t Kentucky.”

Stenhouse now leads Sadler by 23 points as the next race for the Nationwide Series is at Iowa Speedway.