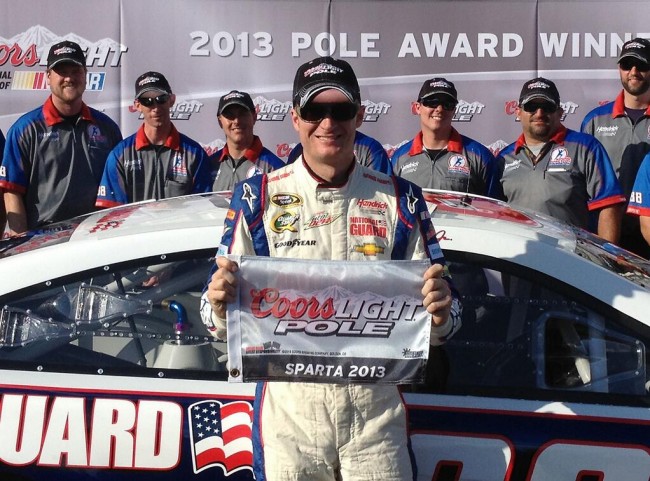 Dale Earnhardt Jr. will start from the pole after setting the fastest time during Friday’s qualifying session for Saturday night’s Quaker State 400 at Kentucky Speedway.

“All of the guys did a real good job of putting a good car out there,” Earnhardt Jr. said.

“We got off turn two well and through [turns] three and four especially well.”

Turning a lap at 183.636 mph around the 1.5-mile track, Earnhardt Jr.broke the previous track record set by his Hendrick Motorsports teammate, Jimmie Johnson, and  grabbed his first pole position of the 2013 season and his first since  at Richmond International Raceway in September,2012.

The pole was marked the twelfth of his Sprint Cup career and his first at Kentucky Speedway.

Earnhardt Jr. took the top-spot away from Johnson early in the session, and held off second-place starter, Carl Edwards, as the session came to a close.

“We got some great cloud cover and it cooled the track temperature down.”

43 cars attempted to make the 43-car field. No cars failed to qualify.