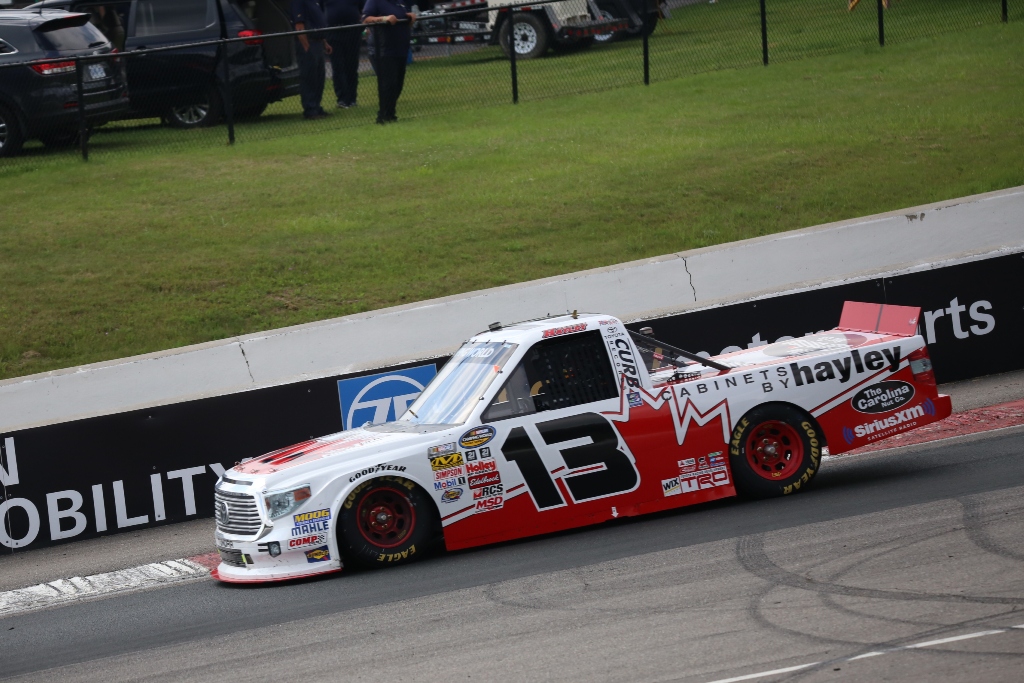 Coming off a solid seventh place finish at Canadian Tire Motorsports Park, Cameron Hayley will be looking to close out the season strong.

The Calgary, Alberta native will enter the final three months of the season coming off of his eighth top-10 finish of the season. It marked a solid performance in a weekend that the rookie said pre-race was up-and-down throughout practice and qualifying.

“It’s been up and down,” he told OnPitRoad.com before the race. “I don’t think we’ve been as strong as we wanted to be, but we’re starting seventh. I think that’s a great starting position, and when it comes down to it, I think we have a great Cabinets by Hayley Tundra and can make our way to the front.”

Throughout the race, Hayley ran up front in the top-10, leading 13 laps during the middle portion of the race en route to a seventh place finish. Being from Canada and racing in front of the Canadian fanbase is something that he says was “huge and incredible”.

Amazing crowd here in Canada! Put me to tears before the race taking a ride around the track for driver intros, Canadian fans are amazing!

“I think you see the turnout at Canadian Tire Motorsports Park this weekend – this place is packed,” he added. “There’s standing room only; it’s amazing, and I think it’s pretty cool to be a driver from Canada and having all that support here.”

The top-10 finish gives Hayley some momentum in a season that he feels has been up and down, with some strong moments, and some lowlights.

Each week, Hayley continues to learn more behind the wheel to get stronger, with the biggest lesson of the year being aggression.

“You have to be so aggressive at these race tracks with the Camping World Truck Series,” he commented. “Everyone is good and professional and at the end of the day, you just have to be aggressive to get a good thing.”

With picking those lessons up on a weekly basis, he’s had knowledge around him, being able to lean on series veterans and teammates Matt Crafton and Johnny Sauter. Hayley says it’s huge to have them as they know how to get around each track well.

Going into the rest of the year, Hayley’s focus is continuing to get stronger and putting in solid performances in a weekly basis.

“We’ve been really up and down and haven’t had a good stretch of races yet,” he commented. “We need to have that good stretch before we can win a race, but I think (the first win is) coming.”

As far as what track he believes he has his best shot at for the rest of the season, he says Phoenix International Raceway, simply based on having experience there in the K&N Pro Series.

“I think that’ll be a good race track for me in the truck,” he said.