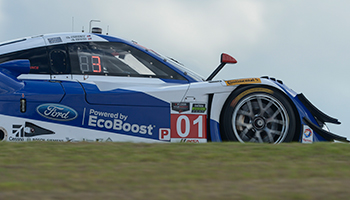 The 2015 running of the Lone Star Le Mans Grand Prix was a tale of two stories. One was a domination by two teams at the top of the list, while behind them there was essentially pure chaos in the other two classes. If normalcy was your greater desire at Circuit of the Americas in Austin, Texas, the performance by Chip Ganassi Racing’s Riley-Ford EcoBoost DP driven by Scott Pruett and Joey Hand certainly fit the bill.

When you look back at this penultimate round of the TUDOR United SportsCar Championship, it was certainly close to a tour de force for Ganassi’s team, which was absent their team boss as he continues to be on the mend after suffering injuries in a bicycling accident last weekend. After the veteran Pruett put the No. 01 machine on the pole position on Friday, the team stuck to a normal pit stop strategy during the two hour, forty minute timed distance, despite the fact several teams took an alternate tact during the first full course caution 25 minutes into the event.

The final race clinching scenario eventually came two fold for Hand, who pitted for fuel and tires with 45 minutes to run. Behind him, Wayne Taylor Racing’s Ricky Taylor gambled by taking fuel only allowing the No. 10 Chevrolet Corvette DP to jump ahead of Hand on the track. Also on a different strategy was the DeltaWing Racing machine of Memo Rojas, who had assumed the overall lead. With both pursuers catching the Mexican-based pilot at a rapid rate, Hand managed to move from third to first overall in just one pass of the 3.4 mile layout with 34 minutes left.

Once in front, Hand pulled clear to take the win by 17 seconds at the finish. The win is also the 60th in sports car competition for Scott Pruett. Ricky Taylor, who after taking over from brother Jordan near the halfway mark was clearly hampered by double stinting his Continental tires to the finish. Fortunately for WTR, the No. 10 Corvette had built enough of an edge to take second place over Prototype class points leaders Visitflorida.com Racing, who took the final place on the podium.

After struggling for pace in qualifying, Michael Valiante and Richard Westbrook stayed out of trouble while other teams close to them on the points table created their own issues on Saturday. That story rang true for Action Express Racing, who saw both of their entries run afoul of the rules in the eyes of the IMSA officials on Saturday. The No. 31 Whelen-backed Corvette of Dane Cameron and Eric Curran, was penalized during the second half of the race for avoidable contact, when they collided with the Starworks Motorsport PC entry of Renger van der Zande. The incident contributed to the second full course caution of the race.

The other AXR Corvette of Joao Barbosa and Christian Fittipaldi received two black flags during the race, the second coming after officials declared that the team did not serve their first foul properly. Finishing fifth and sixth on the day, both of the Gary Nelson-entered machines lost significant ground on Visitflorida.com Racing in the championship race, and will enter the season ending Petit Le Mans at Road Atlanta next month trailing by six and seven points respectively.

In Prototype Challenge, CORE autosport’s Jon Bennett and Colin Braun also weaved their way through the various strategy plays to claim their second win of the season, putting them in prime position in their quest to defend their series title from last year. Eventually, with Braun behind the wheel and less than 30 minutes to run, the American chased down and overtook JDC-Miller Motorsports’ Mikhail Goikhberg to take over the top spot for good. With the various strategies early in the final hour, Braun even managed to take the overall top spot for two laps on the way to victory on Saturday.

The major hyjinx of Saturday afternoon at Circuit of the Americas however, came in the GT Le Mans division. Porsche North America, who entered the Lone Star Le Mans Grand Prix on a three-race winning streak, looked to be in the driver’s seat to claim another race win and their second straight 1-2 finish with ten minutes to go.

Things though would get upset a bit late though, when Rahal Letterman Lanigan’s BMW Z4 with Dirk Werner driving in third place began to close in on the two frontrunners. Unknown to Porsche was the fact that they were close on fuel to make the finish. Yet with Werner becoming a factor both Nick Tandy and Jorg Bergmeister had to pick up the pace. Unfortunately, it was a little too hot of a pace as both the factory backed entries were forced to make a trip to the pit lane with under five minutes to go for a splash of fuel. With both Porsche 911 RSRs suddenly out of the mix, Werner would take the checkered flag, earning co-driver Bill Auburlen and himself their first win since the Tequila Patron Sports Car Showcase at Long Beach in April.

The chances for Corvette Racing to defend its 2014 GTLM title are looking increasingly bleak after Jan Magnussen and Antonio Garcia finished sixth on Saturday. After holding the championship lead since winning at both Daytona and Sebring to open the 2015 campaign, the Doug Fehan-led entry has scored only one podium finish in the past six races.

Finally in the GT Daytona class, the Viper Exchange Riley Motorsports team of Jeroen Bleekemolen and Ben Keating claimed their second win in the past three races on Saturday, securing the win after Bleekemolen overtook Team Seattle Porsche’s Mario Farnbacher with 30 minutes to go. It is the fourth time in 2015, the eight liter, V-10 powered Dodge monster has found the winner circle this season, three more than Riley earned last season when they received factory support from Chrysler, something they have not enjoyed in 2015.

Behind Riley, the resurgence of Turner Motorsport continued Saturday as Markus Palttala and Michael Marsal finished second, which for the reigning GTD champions is only their second podium finish of the season. Finishing third was Paul Miller Racing’s Audi R8 of Dion von Moltke and Christopher Haase, gaining valuable ground on both Scuderia Corsa and TRG-Aston Martin Racing in the points standings.

1 thought on “TUSCC: Drama Behind As Ganassi Wins Again At Texas”