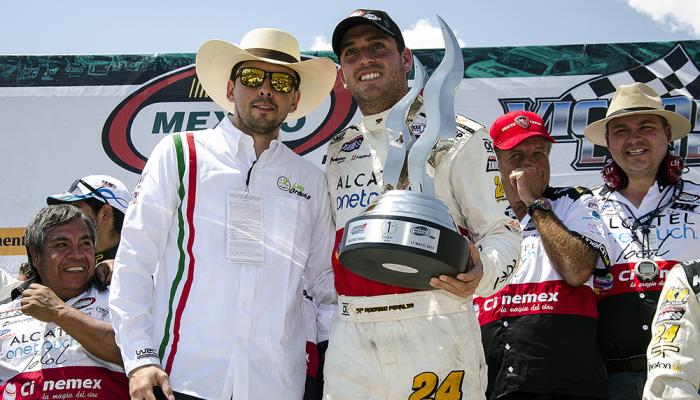 MEXICO CITY — Over the next two months, the NASCAR Mexico Series will determine its 2015 champion.

The Desafío 2015 will begin Sunday at El Dorado Speedway in Chihuahua and culminate on Sunday, Nov. 22 at Tuxtla Gutierrez, Chiapas.

The championship field has been narrowed down to 12 drivers: The top 10 in points after the 10 regular-season races and two wild cars.

Those wild card drivers earned their spots in the Desafío 2015 by virtue of winning races: teammates Rodrigo Peralta and Santiago Tovar.

Both drivers burst onto the scene in 2013 – Peralta won the series championship in the first season of the Desafío, while Tovar earned rookie of the year honors.

Peralta, driver of the No. 24 Alcatel One Touch/Sanirent Toyota for Denisse Guaida, is looking to become just the third driver to win multiple series titles since the series began in 2004.

Peralta missed the playoffs in 2014 – finishing 18th overall – and scored two top fives and six top 10s in the first 10 races this season.

He scored an early season win on May 17 at Nuevo Autodromo de Queretaro, a .750-mile oval in Queretaro. He led a race-high 82 laps, including the final 12 after taking the lead from Ruben Pardo. Peralta also had a run of four straight top 10 finishes before concluding the regular-season with a 14th-place finish at San Luis Potosi.

Likewise, his teammate Tovar has shown flashes of ability to turn his wild-card entry into an ace of the championship.

Tovar followed up his rookie campaign with a pair of pole positions in 2014. This year, the driver of the No. 23 Alcatel One Touch/Cinemex Ford for car owner Allan Van Rankin scored his first win on June 14 at Oval Aguascalientes in Aguascalientes.

Tovar had four top five finishes, which helped him overcome a slow start to the season in which he finished outside the top 20 in the first three races – twice due to mechanical issues.

With five races to decide the championship, the field is wide open.

Santiago Tovar, the 2013 NASCAR Mexico Series rookie of the year, is chasing his first series championship.OCESA