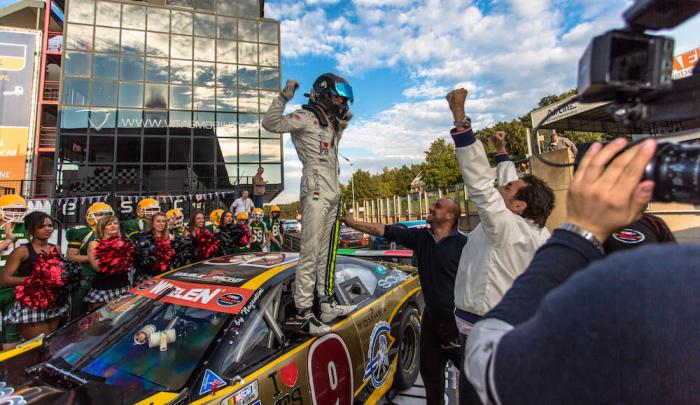 After 16 tense laps of Circuit Zolder, the Italian, who started from the pole, brought home a fundamental race, raising his season count to three wins and taking the points lead by just one point on Tineo. The Spaniard tried a last-lap dive on the leader, but didn’t manage to overtake him and had to defend his position from Renauer to win the Rookie Cup classification. The trio crossed the finish line separated by just over 2.5 seconds, for the delight of the Belgian fans.

“The weekend started pretty good for us. We’ve been fast from the beginning and we hope we will be fast tomorrow too,” said Ercoli. ‘It was a hard race as I had a lot of pressure from behind but the car was really good and we managed to win. I have to thank all of my guys for the hard work and we hope to be at the top tomorrow.”

Thomas Ferrando (#37 Knauf Racing Team Ford Mustang) had the better hand on Maxime Dumarey (#24 PK Carsport Chevrolet SS) for the fourth position, keeping  himself in contention for the ELITE 2 title, as did Philipp Lietz (#67 GDL Racing Ford Mustang), who had to switch to the spare car after being involved in the last-lap accident in the ELITE 1 Division. The Austrian managed to bring home a solid sixth place and despite losing the points lead, he’s just 2 points behind Ercoli with the first four separated by just 8 points.