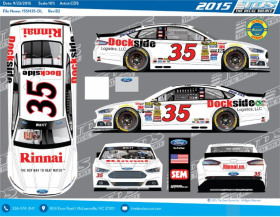 STATESVILLE, N.C. (October 2, 2015) – Rinnai Tankless Water Heaters will expand its partnership with Front Row Motorsports and Cole Whitt, joining the team as co-primary sponsor for Sunday’s NASCAR Sprint Cup Series race at Dover (Del.) International Speedway and as primary sponsor for the Oct. 10 race at Charlotte (N.C.) Motor Speedway. The company will also be an associate sponsor for the season-ending races at Phoenix (Ariz.) International Raceway and Homestead-Miami (Fla.) Speedway.

Rinnai, the number-one selling brand of tankless water heaters in the U.S. and Canada, has already served as a primary or associate partner on Whitt’s No. 35 for six races in the 2015 season, including at the Peachtree City, Ga.-based company’s home track of Atlanta Motor Speedway.

“Rinnai has been a great partner and they’re really taking advantage of the opportunities that NASCAR can offer,” Whitt said. “They’ve made new relationships since joining the sport and have grown their business as a result. I’m proud of that and I hope to see it keep going in that direction.”

“We’ve really enjoyed working with Rinnai,” said team owner Bob Jenkins. “Their partnership with us as a race team has grown, and they’ve also made new relationships with other business partners of ours looking to take advantage of the efficiencies that Rinnai products can provide. We look forward to having them at the racetrack with us for four more races this year.”

For more information about Rinnai and its products, visit rinnai.us.

Rinnai America Corporation, a subsidiary of Rinnai Corporation in Nagoya, Japan, was established in 1974 and is headquartered in Peachtree City, Ga. Rinnai Corporation manufactures gas appliances including tankless water heaters, a wide range of kitchen appliances and heating and air conditioning units. As the technology leader in its industry, Rinnai is the largest gas appliance manufacturer in Japan and is the No. 1 selling brand of tankless gas water heaters in the United States and Canada. Annual corporate revenues, including those of its subsidiaries, are in excess of $2.8 billion. With a global perspective to create 21st century products for the home and business, Rinnai Corporation commits itself to safety and the pursuit of comfortable lifestyles. For more information about Rinnai’s entire product line, visit rinnai.us.

Front Row Motorsports is a race-winning organization competing in NASCAR’s premier Sprint Cup Series, fielding the No. 34, the No. 35 and the No. 38 Fords. The team is owned by Bob Jenkins and is headquartered just outside of Charlotte, N.C. FRM was named to INC Magazine’s “INC 5000″ list in 2012, recognizing the 5,000 fastest-growing private companies in the U.S. The team’s partnership base is representative of more than $200 billion of the U.S. economy and includes organizations such as Ford Motor Company, Love’s Travel Stops, Colgate-Palmolive, CSX Transportation, Taco Bell and Long John Silver’s. Visit teamfrm.com.