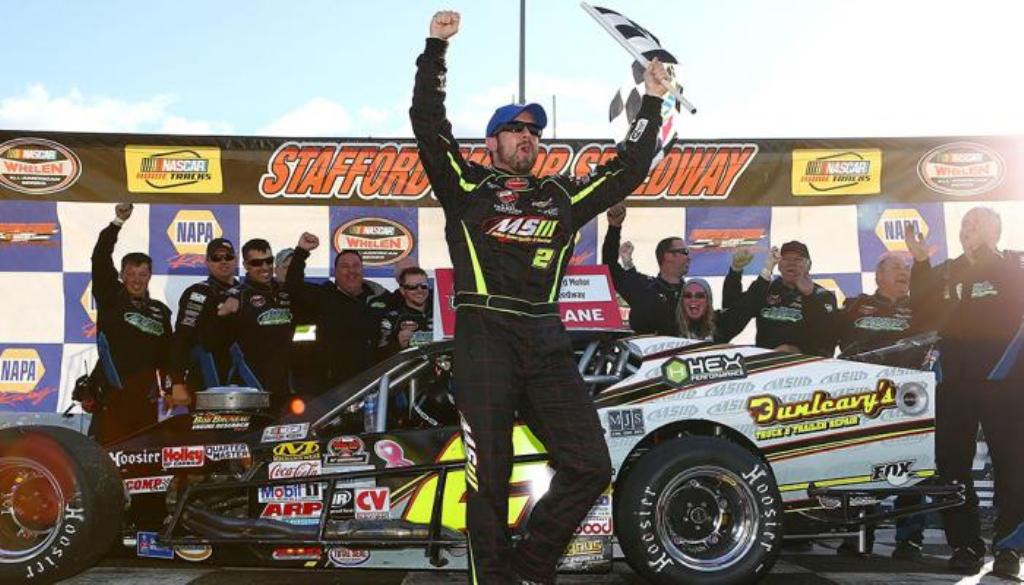 Pulls Even With Preece After Fall Final Triumph At Stafford

STAFFORD, Conn. — Three races after it appeared Doug Coby’s efforts to repeat as NASCAR Whelen Modified Tour champion were in jeopardy, he’s back in the driver’s seat.

The Milford, Connecticut, driver rolled to his second straight win Sunday in the NAPA Fall Final 150 at Connecticut’s Stafford Motor Speedway and will head into the season finale as the championship points leader.

Ryan Preece, the 2013 champion who was the runner-up to Coby in 2012 and 2014, rebounded from an accident and pit road penalty to finish second at Stafford. Woody Pitkat, who entered the penultimate race weekend with the points lead, finished 12th after being involved in a late-race wreck.

The result is Coby will head to the season finale even in points with Preece. They are both four points (565) ahead of Pitkat (561) going into the Sunoco World Series 150 at Connecticut’s Thompson Speedway Motorsports Park on Sunday, Oct. 18.

Coby has six wins to Preece’s four and Pitkat’s one.

It’s a dramatic turn of events for Coby, who wrecked on Lap 2 at Bristol Motor Speedway on Aug. 19 and left the World’s Fastest Half-Mile 33 points out of the lead. He finished second at New York’s Riverhead Raceway before winning last week at New Hampshire Motor Speedway and Sunday’s race at Stafford.

Coby also earned the Coors Light Pole Award for the NAPA Fall Final 150 in qualifying on Saturday. With Sunday’s win he became the first Whelen Modified Tour driver since Donny Lia in 2007 to win six events in a season.

Timmy Solomito was third on Sunday, followed by Lia and Shawn Solomito.