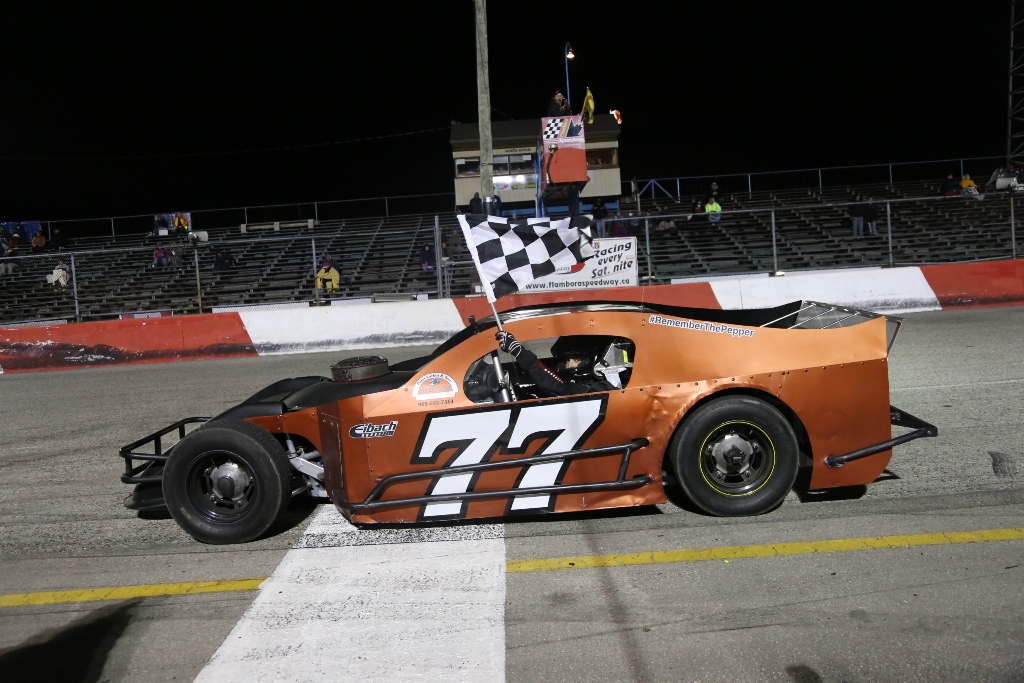 PETERBOROUGH, Ontario — Knowing that the team has speed and given the previous success at Peterborough Speedway, it’s no secret that Chad Strawn is heading into this weekend’s Autumn Colors Classic with confidence on his side.

Strawn will be behind the wheel of the No. 77 Eibach and Kingsmen Kustoms Modified for his final OSCAAR event as he will be taking next year off.

“With two young children and a hectic job, Chad is taking time off from racing,” S&S Racing team owner Brian Strawn stated. “Brad Stevenson will be taking over car for next year. Chad has had a fast car for the last three years, has won several races few features and a lot of bad luck this year. But all in all, he has done a great job piloting the 77 OSCAAR Modified against a great group of guys in the series.”

For Strawn, there’s an added boost of confidence coming into this weekend after scoring an OMRS heat victory at this past week’s Frostoberfest at Flamboro Speedway event after starting fifth. Unfortunately, the features weren’t run due to Flamboro postponing the remainder of the event to October 17.

“I’m just hoping for a clean race,” Strawn says coming into this weekend. “We haven’t really had a good season, as far as wrecks and staying out of trouble. So that’s all I’m going to try and do.”

This year, Strawn has shown speed at each of the tracks that he has visited, though a mix of incidents with other drivers and pure bad luck have taken him out of contention. He was running strong at Sunset Speedway last month when debris from a wreck ahead of him punched a hole in the radiator.

The days that everything falls into place, though, Strawn is up near the front, battling for a top-five finishing position. That was evident back in August when he finished third in the Chase for the Colors event at Peterborough.

“We always have good runs at Peterborough – it’s just staying out of other people’s wrecks,” Strawn commented. “It’s the last race of the season so I’m going to drive it like I stole it.”

Details about this weekend’s event can be found by visiting Peterborough Speedway’s website at http://www.peterboroughspeedway.com