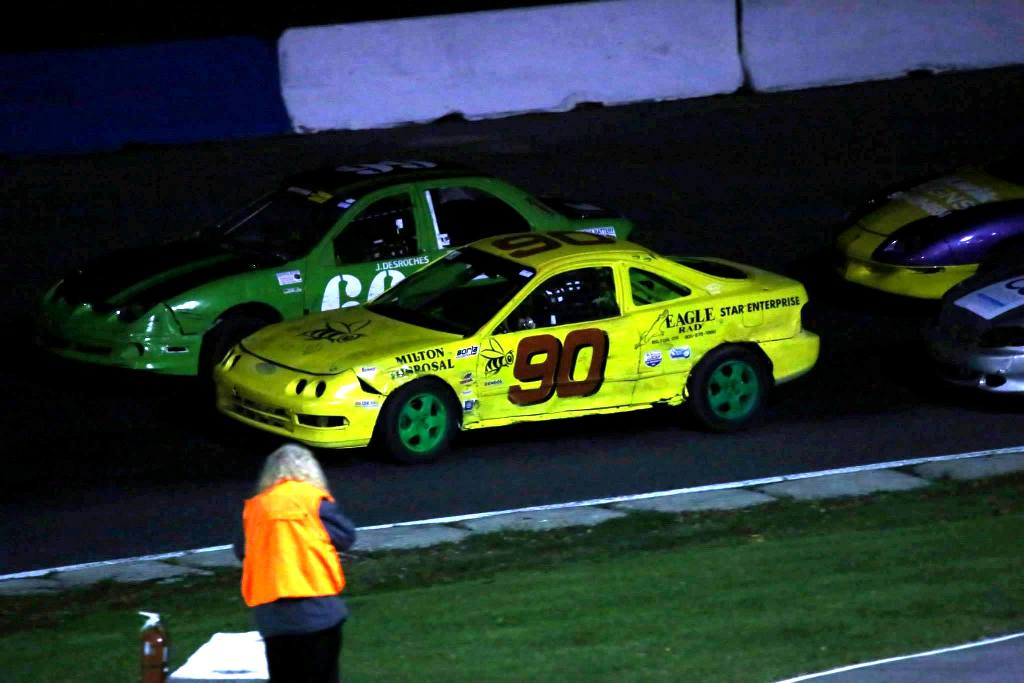 After battling at the front of the field all race long, it’d be Andy Wheller picking up the victory in the Autumn Colours Classic 40-lap feature for the Four Funs.

Jackson would grab the early lead ahead of Wheller and Jeremy Kelly, with Dave Feeney and Mulders getting tangled up. The caution would then fly on lap two as a result of power steering fluid being leaked all the way around the track by Shawn Solomon.

Jackson would get a good restart to keep the lead ahead of Wheller and Kelly, while Scott Simpson headed down pit road on lap six. Wills would then pit on lap 10, with the caution flying three laps later for DesRoches being spun off of turn four due to Colin Parkes. Under the yellow flag, Junkin would head down pit road. With 27 laps to go, Jackson led Wheller, Kelly, Ryan Oosterholt, Powell, Matt Vanderbelt, Tiffany Vanderbelt, McDonald and Stewart.

Dave Feeney would then pull off with smoke trailing on lap 24, with the caution flying a lap later for a broken suspension part on the track from Kenny’s car. With 15 laps to go, Oosterholt led Powell, Kelly, Jackson, Wheller, Tiffany Vanderbelt, McDonald, Keith Parkes and Matt Vanderbelt.

Counting caution due to the length of the race, the restart would come with 13 laps to go with Powell battling Oosterholt for the lead. Ooosterholt would keep the advantage with Kelly moving into second while Wheller battled Powell for third. Wheller would then get the spot with nine laps to go ahead of Jackson. Oosterholt would then break while leading, handing the lead over to Kelly ahead of Wheller, Jackson and Phil Givens.

The red flag would then come out with five lap to go after a big wreck in turn three and four. Gates would go through the grass, tagging the 14 and causing both drivers to spin. Keith Parkes would then hit Gates, followed by DesRoaches hitting Parkes. DesRoaches would be transported to hospital after complaining of some back pain, but returned to the track later that night with reports of just suffering whiplash.

The final restart would be the opportunity that Andy Wheller needed as he’d take the lead and not look back en route to scoring the victory ahead of Phil Givens, Derek Jackson, Jeremy Kelly and Kenny Ohno Jr.