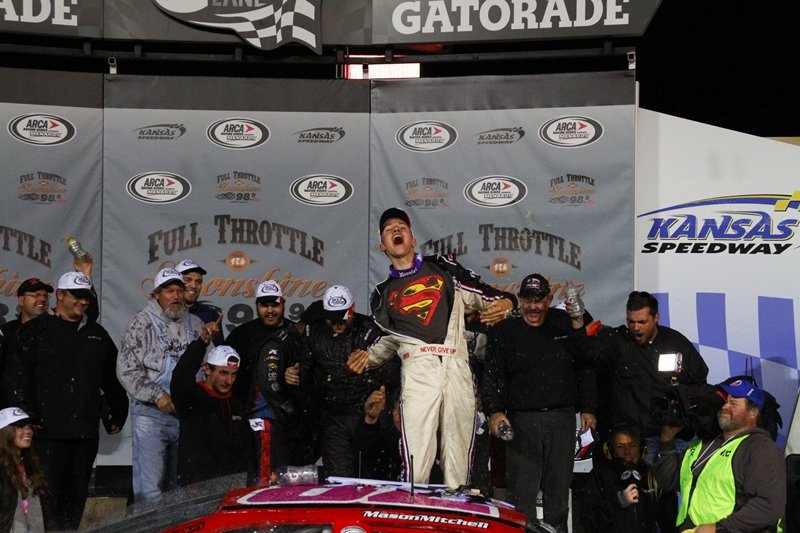 (Kansas City, Kan.,  October 17, 2015-) Two weeks prior to the S’loonshine 98.9 at the Kansas Speedway, 2014 ARCA Racing Series champion Mason Mitchell thought he would only be at the Kansas Speedway as an owner not a driver. For the second time this season Karl Chevrolet stepped up and gave Mitchell the support needed to allow him to race. The decision was a good one.

Mitchell earned his third career ARCA Racing Series event Friday evening at the Kansas Speedway and scored his second win of the 2015 season.

“This was one of the hardest fought wins in my career,” Mitchell stated after the S’loonshine 98.9 Friday evening.

“It was great to battle my teammate John Wes Townley for the win. He really made me earn this win in the closing laps and pushed me to the limits. It’s a great feeling having your cars running first and second and battling for the win.”

“We had no intentions coming back down to pit-road after our first stop at lap 28. We calculated the mileage and knew we would have just enough to make it. I can’t thank everyone on this MMM team and Karl Chevrolet enough for their support. Without them we wouldn’t have even been here.”

Mitchell brought the Karl Chevrolet No. 78 car down pit-road at lap 28 under the guidance of veteran crew chief Kevin Reed for four Hoosier tires and fuel. Mitchell restarted in the 10th position and worked his way back inside the top-five before the caution waved at lap 37.

Mitchell inherited the lead under the caution when the leaders came down pit-road. Mitchell then jumped out to a 3.7 second lead during the evening’s longest green flag run.

Mitchell went on to pull away from Kyle Weatherman and win his third career ARCA race by a margin over three seconds.

Mitchell’s schedule was scaled back in 2015 running in only six ARCA events after winning the 2014 ARCA championship. The Iowa native made the most of his limited ARCA starts winning two races (Iowa, Kansas Speedway), earning four top-five finishes, five top-tens with an average finish of sixth.

The win also marked MMM’s third win as an organization of the 2015, winning Winchester, Iowa and Kansas.

Mason Mitchell Motorsports: Is a championship driver development team fielding multiple entries in the ARCA Racing Series and the NASCAR K&N Pro Series for the 2016 season. The team is based out of Mooresville, North Carolina. http://www.masonmitchellmotorsports.com