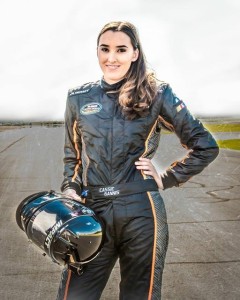 Cassie Gannis, the 24 year old female race driver from Phoenix, Arizona, announced today that she is scheduled to race in the Camping World Truck Series at Phoenix International Raceway on Friday, November 13, 2015. Gannis will be driving the Mike Harmon Racing #74 truck in practice on Thursday and qualification on Friday, then in the Lucas Oil 150 race scheduled to start at 6:30pm.

Gannis lives in Phoenix and works as a veterinarian technician at a local animal hospital when she’s not racing. She is also very active in the Phoenix metro community, promoting safe driving and Don’t Text and Drive campaigns. She had to take 8 months off from racing in 2006 due to spinal surgery, but she says, “Learning to work through these challenges has taught me about perseverance and motivation. Always keep your goals in mind. It’s amazing what will happen.” She has been hoping to break into truck racing for several years, and now it looks like that goal is becoming a reality for her.

During her experience in the K&N West series, Gannis was named Most Popular Driver in 2012. A graduate of the Lyn St. James Driving Academy, she has made numerous NASCAR appearances in her own #7 Super Late Model car at Tucson Speedway, about 2 hours south of Phoenix. She also has racing experience at Las Vegas Motor Speedway, Irwindale Raceway, Colorado National Speedway, and several others. Her earliest experience was in the Quarter Midget series from 1999 to 2003, with 15 top 5 finishes in 18 races.

Mike Harmon, owner of the #74 truck that Gannis will be driving, has a 40 year racing history, and entered the NASCAR Busch Series in 1996. With many years of experience in NASCAR and ARCA driving for other teams, Harmon formed Mike Harmon Racing and races his own car in NASCAR’s Xfinity Series, as well as the truck in the Camping World Truck Series. Owning his own team, he has enjoyed the opportunity to mentor a number of young racers.

Gannis was in Charlotte, NC for a racing event when she and Harmon discussed the possibility of her racing one of his trucks at Phoenix International Raceway. After that meeting, discussions began with Just Branding, a division of Tarheeldude Media Ventures to try and obtain sponsorship. Details of that sponsorship have yet to be released.

Cassie Gannis Racing, LLC is a family-run racing team based in Phoenix, Arizona, and has relied on local and regional sponsors around Arizona for most of Gannis’s racing career. The local sponsor list includes the following:

She has also had support from David Baker, an AMSOil authorized dealer out of Rock Hill, SC at http://DBMotorsports.MyAMSOil.com/.