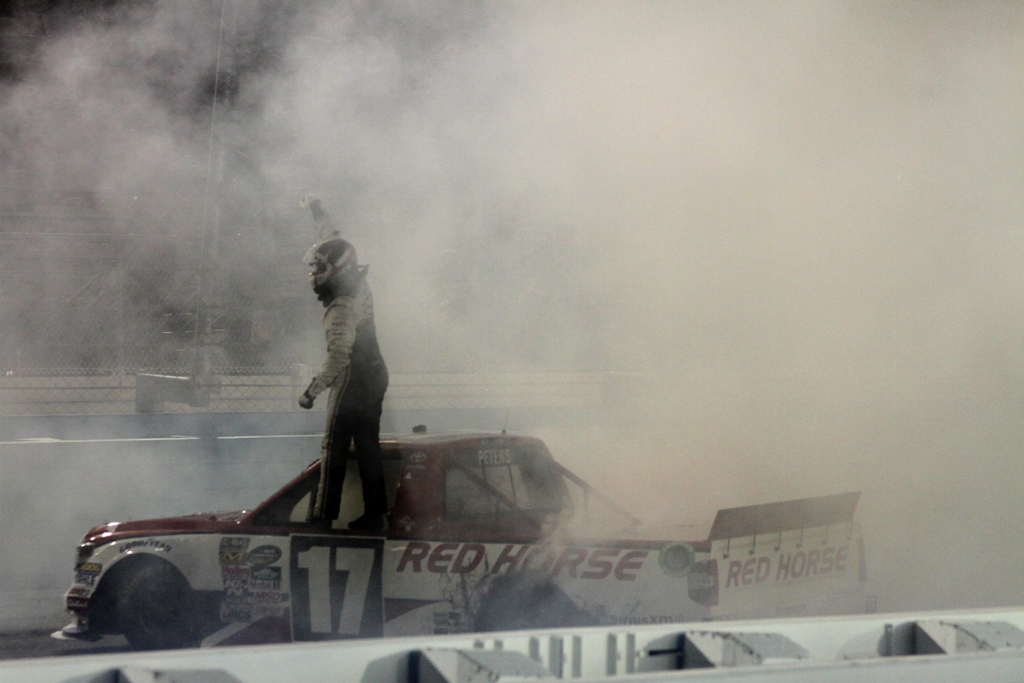 When the leaders crashed in front of him, it opened the doors before him and he was set to take full advantage. Putting together a strong restart, Peters was able to drive away from the field, and then hold off John Hunter Nemechek in the final laps.

“We were a top-five truck and we earned this one. It’s just awesome,” Peters said. “The track was pretty slick when they gave us the one to go. The truck was good on the short run, and we got a little tight on corner exit on the long run so it was all about watching how far you drive in the corner.”

In front of Peters, the battle for the championship and win looked to be coming down to the wire between Erik Jones and Matt Crafton. Though off of turn four, Crafton got loose and made contact with Jones, causing Jones to hit the wall. The contact would cause Crafton to go across the fronttretch, clobbering the front of his teammate, Johnny Sauter.

Jones was able to continue, staying on the lead lap and surviving the final laps to finish 10th.

“I really don’t want to talk about Matt much,” Jones stated. “It was disappointing when you’re racing for the win when something like that happens. Mistakes happen and unfortunately his mistake happened costing us both a shot at the win. It’s unfortunate as we had a good truck after leading all those laps.”

As a result, he will head to the season finale, leading by 19 points ahead of Tyler Reddick.

“At that moment, I wasn’t thinking about the championship but rather than winning a race,” Jones added “I was somewhat worried about it but figured we’d be okay as the 88 had more damage.”

Crafton, though, would struggle with making his return to the track due to the amount of damage. As a result, he would finish 23rd. The damage would also result in the night ending for Sauter.

“100% my fault,” Crafton stated. “I made a mistake. I got loose underneath him. When you’re racing that close, you sometimes lean on each other and it happens. I made a mistake and I take the full blame. I hate it for the guys as they built a really good truck.”

“I think Crafton got loose underneath the 4, and then he came across the track and I had nowhere to go,” Sauter said. “It’s a shame, our truck was really good tonight. I had good truck in race trim. I just wanted this race to go green as I felt we had a good truck, could run the same lap times as the others. This thing is destroyed. That was a big hit.”

The contact didn’t go over well with Carl Joiner Jr., crew chief for Crafton, who stated, “You get these young guys that don’t want to give up or stop leaning. Racing for a championship, sometimes you should just take care of your stuff. He should’ve just let up and went in behind us there. Every time you get on someone’s door, you pedal it and he pedaled it and just got into him.”

John Wes Townley and Daniel Suarez would follow, with Tyler Reddick completing the top-five. Despite having a rough final pit stop that dropped him from third to just outside of the top-five, he was able to close within the final laps to gain the valuable point system. As a result, he will head to the final event of the season with a championship chance

“I was really proud of my guys,” Reddick stated. “We built a strong truck that showed up in the race. It’s a shame that we had our hiccup on the road. With the way things played out, we would’ve been right there with that wreck. Being further back made it looser and just couldn’t make the passes that I needed to make.”

The beginning of the race would not work out for the youngsters, with a bunch finding themselves in incidents.

The race would start off with Brandon Jones and William Bryon making contact, causing Jones to spin down the track and collect Cole Custer, who would tag Byron. It marked the end of the event for both Jones and Byron. Then on lap 45, Mingus would lock up the brakes going into the corner, tagging Dalton Sargeant, who would then make contact with Ben Kennedy and Rico Abreu.