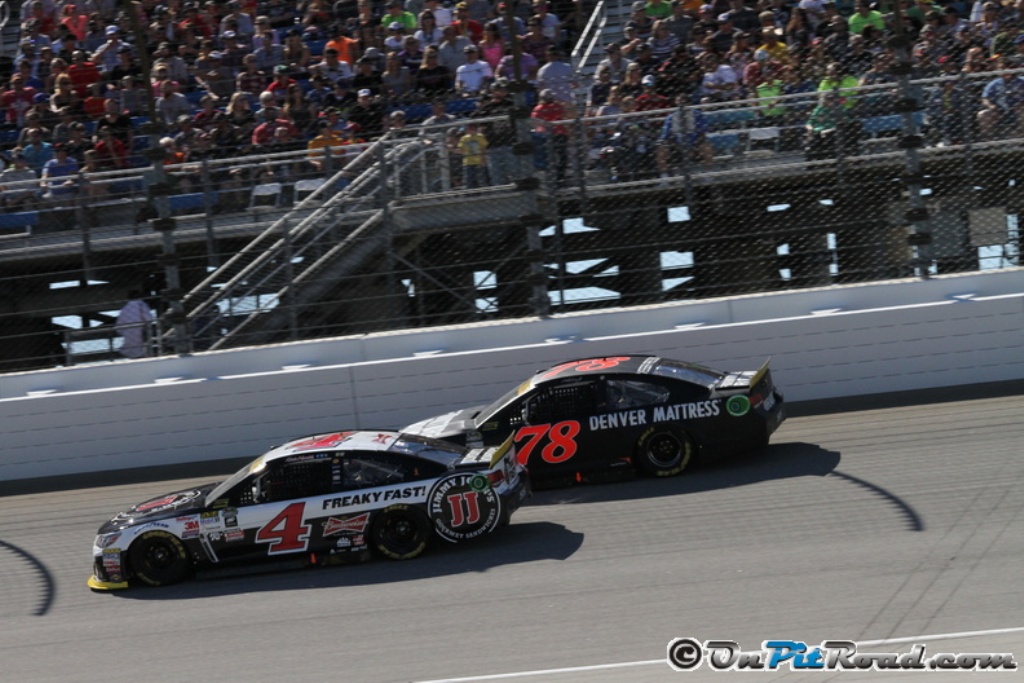 “I don’t think that’s an approved question. They don’t have an affiliation,” Harvick quipped first. “See, you guys are missing the whole goal. The whole goal is to not piss anybody off to the point where they just absolutely want to go home and you motivate them. I think they’re all great stories.”

Kyle Busch was the first driver to actually state his choice, going with his childhood hero Jeff Gordon, while Martin Truex Jr. claimed that the question was a set-up.

Throughout the whole press conference, it was evident that there is a mutual respect between the four drivers that will battle for the championship in the Ford EcoBoost 400 on Sunday at Homestead-Miami Speedway. With the current format, whomever finishes ahead of whom – whether Gordon, Harvick, Busch or Truex Jr. – they will be the 2015 Sprint Cup Series Championship. It seems odd that there’d be respect given how the “driver code of respect” has come into question over the Chase for the Sprint Cup thus far, with the battle between Joey Logano and Matt Kenseth, as well as hints surrounding the fact that Harvick purposely caused the big one at Talladega Superspeedway to salvage his championship hopes.

Truex says for him, it comes to the fact that he isn’t about to change the way he has raced thus far in his career, and that is in a respectful matter with his fellow competitors. He admits that he may push or shove a little when it comes down to the wire, but it’s not in the cards to go purposely wreck one of his fellow drivers to win the championship.

“We’re going to put our best effort out there on the racetrack,” Truex Jr. added. “We’re going to race as hard as we can, and hopefully we don’t have to worry about crossing that line.”

The respect that they share is something that Gordon says comes from not currently having any beefs with each other, as none of the drivers have recently ran into each other on the track to cause tension. As a result, Gordon says that they have created respect for each other, and want to race each other clean right down to the end.

“If you put the bumper to them and they spin, they crash, even if you crossed the line first, that’s going to weigh on you a little bit. Yeah, you might be the champion, but it’s still going to be — have sort of a shadow over it,” he added. “I think if you ask us right now what we’d be willing to do, it’s we want to go do it in a clean way, but you don’t know how you’re going to react on that last lap when you’ve had it in sight, and you don’t know what’s going to go on throughout the whole race that may create an opportunity.”

There’s also the fact that they each have a compelling story – Harvick trying to repeat, Gordon in his season, Busch after injury and Truex with the small team from Colorado. Beyond the friendship across the board, Truex says respect comes from knowing each other’s story.

“I think we have respect for each other’s stories, how we got here, what we have on the line, and for the most part on the racetrack we all respect each other as well,” he said.

Despite everything seeming smooth, the driver still predict a top-notch battle on Sunday afternoon.

Out of the four drivers, Harvick is the only driver who has been one of the final four under this format, having won the championship last year in a finale that included Ryan Newman, Logano and Denny Hamlin. Looking back, Harvick said throughout the event they each raced each other hard, yet clean throughout the day, adding that he wouldn’t be surprised if it was the same this year once again for the victory.

Being that racing against each other within a race that includes 39 other competitors, it’s no secret that the fans and teams will keep an eye on each other. As to whether the drivers require that information, Harvick says he doesn’t worry about that – but whether doing what he can to get to the front of the whole field.

“Well, if you’re in front of them, you’ll know, and that’s the only spot that matters,” he said. “I mean, at that point you’re going to notice a driver, where you’re at with only three guys.”

Truex added that it’s only the way to go about it as everybody feels that to win the championship, they will need to win the race – just as Harvick did last year.

“If you’re doing what you need to do, you’re pretty much going to know where they’re at,” he continued. “I could see a lot of scenarios in my head where the four of us are running in the top 5 a lot of that race. You’ll know if you’re ahead of them, and that’s where you’ll want to be.”

For now, though, at least they know that there is a mutual respect across the board that hopefully will remain for all 400 miles, something that Harvick blames on Jeff Gordon with this being Gordon’s final season.  Harvick says Gordon is someone that has meant a lot to the sport over the years, and having gotten closer to Gordon with Stewart-Haas Racing’s alliance with Hendrick Motorsports has been pretty neat and added to the respect level.

“I think when you look at all that, you know, I think there’s a demand for that respect that he deserves, and it’s Jeff Gordon,” Harvick stated. “So you know, I mean, this is a moment where it’s about the championship, but it’s also paying respect to what is going to be his last race and a pretty cool moment, whether he wins or loses, the way the year has gone for him has been pretty neat.”

With that said, Harvick commented during the press conference that he wasn’t going “to be the guy that was disrespectful at Jeff Gordon’s last press conference or say something (as) that’s just a total jackass move.”