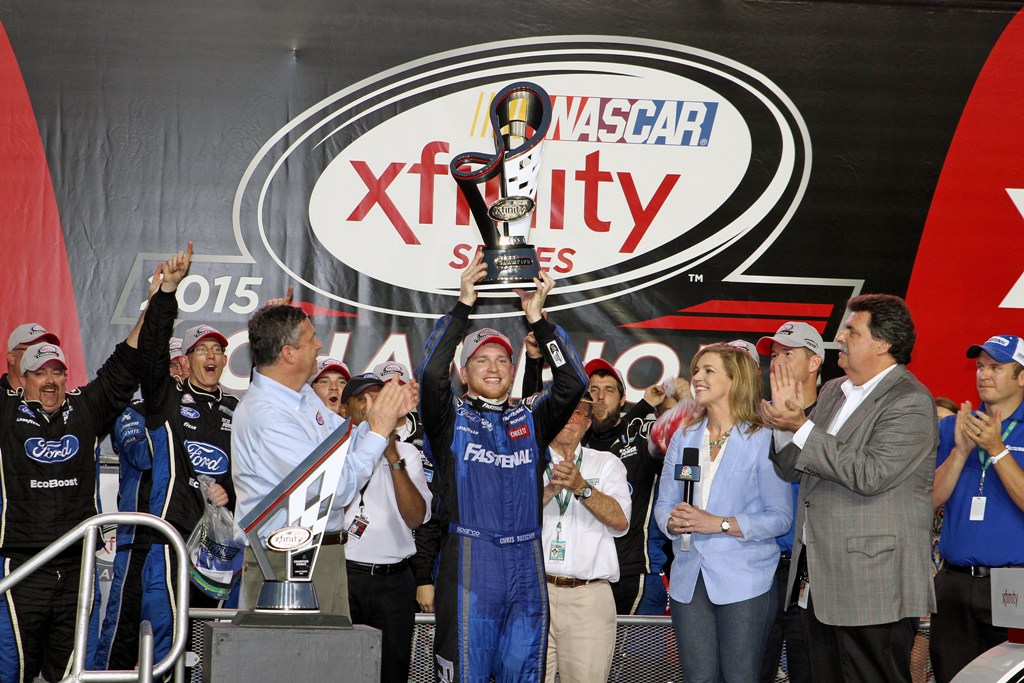 After working his way up through the ranks, Chris Buescher gets to call himself a champion. A solid 11th place finish for the driver of the No. 60 Fastenal Ford allowed him to take home the 2015 NASCAR XFINITY Series Championship.

“It’s obviously pretty big,” he commented. “This is the biggest moment in my career. Just an awesome year for our organization, for our team. The guys did a tremendous job. No DNFs all year, no mechanical failures, nothing that we beat ourselves on. You know, we were flawless in that regard, and it put us in the position to go out and win this thing like we can today. We didn’t have to go out there and win the race in order to bring a championship home. We had to make sure we finished, and we did just that.

“Just so proud of the guys. Just thank you to Ford and all of our sponsors, Fastenal and Roush and AdvoCare and everyone that came on board and helped this year. I think we ran 11 different paint schemes to make it to the end. It was a tough year, but I’m so happy we were able to pull it off, and again, just so proud of my team. They’ve really stepped up to the occasion and made sure that this happened.”

Though despite the latest high of his career, the Texas native hasn’t forgot how he got to this point, including his move to North Carolina at the age of 15 after meeting the Ken and David Ragan. While racing legends, he met Ken after getting black flagged for rough-driving on Charlotte Motor Speedway’s quarter-mile front stretch oval.

“Everyone knows it’s a contact sport there. You’ve got to do all you can do to make spots up. It was not the only time I got black flagged for rough driving there, Buescher commented. “I got sat out a week later on, maybe the next year. I got to sit in the tower and watch the race. I said, Man, if I’m not allowed to race can I come sit with you guys in the tower? I don’t think they liked me asking that, but they let me.

“But the original incident, I don’t remember what exactly happened. It was a heat race, and I went over to the 600 — my crew chief at the time was already good friends with the Ragans, had grew up with them and knew them, and I think Ken might have dropped a bug in his ear. He said, You need to bring him over and let me talk to him; I’ll settle him right down. That he did, after a several-hour conversation, which conversation would imply that I was getting to talk back.”

Buescher said it marked a key learning experience at the age of 12, in learning when to be patient and when to be aggressive in a race.

From that point, the relationship grew between the pair and with Buescher’s career budding as the next couple years went by, Ragan made the suggestion to Buescher about moving to Charlotte, but Buescher couldn’t as it’d mark a big move for the family, with both sisters heavily involved in other activities with their own lives.

“I can’t expect them to uproot for myself,” Buescher expressed. “So my parents told me we weren’t going to be able to do it, and Ken said, well, why don’t you just move in with us. He said, David just moved out and he said, you can just take his bedroom and just keep up with the yard and make sure it’s mowed and kept up nice, and we’ll see what we can do to give you a hand. So I left the house at just before 16 years old and moved out to Charlotte. Home schooled through what was the rest of — what was left of my high school years, went and got a GED, and pretty much did whatever I could to stay racing. I worked in David Ragan’s shop. I helped on his late model legends cars, and they really helped me get to this point. They really gave me an opportunity that I wouldn’t have had otherwise.

“I’ve got to thank my parents for being gracious enough to let me move away from home at 16 years old. That was tough on them. But I think after today, they know it was well worth it.”