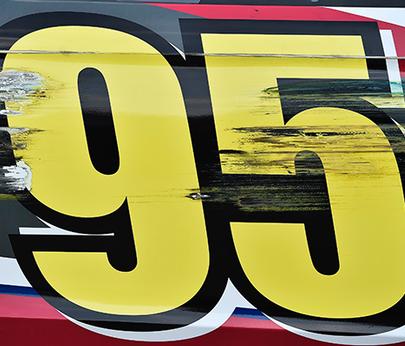 Single Car Team Looks Back at 2015 Highs and Lows CONCORD, N.C. (November 25, 2015) – Leavine Family Racing completed its fifth season of competition in the NASCAR Sprint Cup Series this past weekend at Homestead-Miami Speedway. The team had a turbulent 2015, which included a fire at the race shop, personnel changes mid-season and challenges with rained-out qualifying sessions.

Through it all, the single-car team showcased their “never give up” attitude.

“It was still a building year and whenever you’re building it’s sometimes two steps forward and one step back,” said team owner Bob Leavine.  “Overall, I think we had an acceptable year, but we didn’t meet all of my goals.  We had a lot of changes and setbacks.  Our shop with the fire – as much as we fought through that, it did affect what we did on the track just with focus and concentration.  But the guys did a great job and should be admired for that.”

Thrivent Financial and K-LOVE Radio, the primary sponsors of the No. 95 Ford this season, have been a major asset to the single-car team. After a test run in 2014, Thrivent Financial became primary sponsor of the No. 95 Ford in 13 races this season.  The financial services company embraced the partnership and fully activated with marketing efforts focused around the team and driver.

“Without our sponsors this season we wouldn’t have been able to accomplish what we wanted to accomplish,” said race team vice president, Jeremy Lange.  “We would not be able to be looking at a 36-race schedule in 2016 if it weren’t for our partners in Thrivent and K-LOVE.  I think Thrivent helped us grow on a national level as far as exposure-wise from their activation and 2.5 million members.  And sponsors like Monitronics helped us get back into our race shop after the fire.”

K-LOVE Radio has partnered with Leavine Family Racing for two years and is in its fifth year with driver Michael McDowell.  The Christian radio network launched an online game this summer featuring the No. 95 race car and McDowell.

“From the team standpoint having partners like Thrivent Financial and K-LOVE Radio helps legitimize our program. Moving forward we can then attract corporate sponsors and partners, and the partners that we have are unique – they are not like other partners in the sport,” said driver Michael McDowell.  “For me it’s great because of my faith and the common bond we have with our partners.  I’m really thankful that we have partners that do amazing things for the community and use racing as a platform to do it.”

“I think we had highs and lows throughout the year, but if you look at our average finish when we raced it was between 30th and 31st,” said Lange.  “I would think that a 30th-place team over the course of 16 races is pretty good.  It doesn’t’ sound good, but if you know the sport – we are out-qualifying and finishing better than a lot of good cars and fully funded cars during our races.  Our goal is to be a Top-25 team racing 36 races and I think we can get there with the right support, funding and personnel.”

McDowell agreed with the competition assessment based on the team’s current resources.

“We are working hard and it’s fun when we can out-qualify some really good cars,” McDowell said.  “On the outside you look at it and you qualified 29th but Tony Stewart and a lot of good cars were behind us (at Homestead).  And I just think about how we’ve got 10 guys back at the shop and they’ve got like 400 and lots of engineers and big budgets.  And it’s fun because we are all literally working on the cars.”

The uncertainty of the future of the NASCAR ownership model has been a struggle for Leavine Family Racing as they work to attract personnel and partners leading into the 2016 season.

While bigger, established teams have started preparing for Daytona, Leavine Family Racing is in a standstill – awaiting decisions by NASCAR in order to move forward.

“Thanksgiving is still going to be pretty thought provoking because we have about eight different scenarios that our team could go in next year,” said Leavine. “It’s going to be a challenging off-season, we’ve talked about maybe getting contract labor to work later at night and have another shift at the shop to get the cars done.  Committing to your first season as a full-time team is a big deal.  You don’t go from 20 to 36 races without some planning.”

McDowell and the team are looking forward to continuing the growth in 2016 and beyond.

“This year has had its challenges – we’ve had set backs with fires and things like that – but overall I feel that we’ve persevered,” said McDowell.  “You know we are a small team, and we’ve accomplished some of the goals that we wanted to accomplish and we have to accomplish more still yet.  It’s been a slow process, but we knew it was going to be that way. We are all really looking forward to next year and continuing that growing process.”