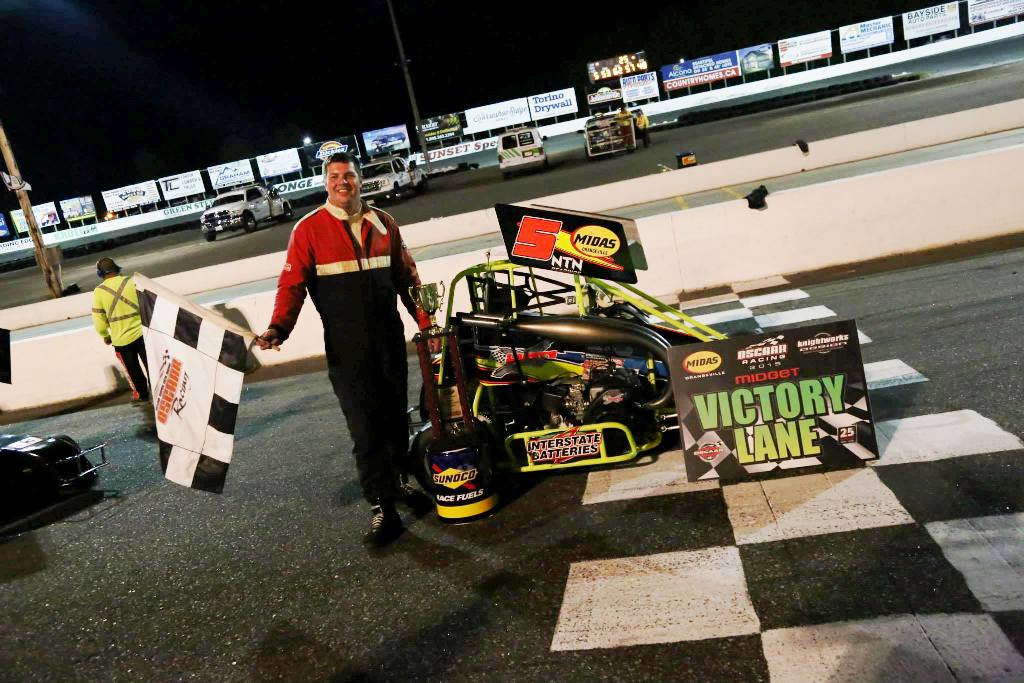 The year didn’t start off smoothly for Bound without any doubt, as while he proved that he’d be a driver to watch throughout the season, he also had his share of bad luck. The first four races of the schedule consisted of two runner-up finishes, and two finishes outside of the top-15.

Things started off positively at Sunset Speedway with a runner-up finish despite having to restart at the tail of the field in the early laps due to being deemed as jumping the start by officials. Unfortunately, the following weekend at Peterborough Speedway wasn’t a merry, though, with a 16th place finish. A return to Sunset Speedway brought forth a bunch of laps led ahead of the field before being passed in the late going by Robin McLean, resulting in a second place finish. As noted, though, the trip to Full Throttle Motor Speedway wasn’t positive with a 17th place finish.

Despite having a rocky on-and-off start to the year, things seemed to find a middle ground through July with three consecutive top-five finishes.

It seemed Sunset Speedway was Bound’s magic ticket as the trip in July resulted in a third runner-up finish following a last lap pass on Jessica James. The success at Sunset resulted in Bound taking over the points lead, just two points ahead of Paul Draganac.

The positive momentum then continued to Peterborough Speedway, as he was able to run up front throughout the event en route to a fourth place finish. He would then head to Sauble Speedway, keeping himself near the front of the field all race long en route to another second place finish.

After the success through the first half of the summer, all eyes were on the rookie to see whether he could carry it through the second half of the season. It wouldn’t start off that hopeful, though, as a trip to Peterborough to start August resulted in a 20th place finish following contact with a lap car during the event. The bad luck then carried forward to Grand Bend Speedway, as mechanical issues resulted in a 15th place finish. It also resulted in Bound losing the points lead by a mere point to Brian Woodland.

He wouldn’t be down for long, though, as the final stretch of four races to complete the year showcased why he is rightfully deserving of the crown this year. In the early laps at Flamboro Speedway, Bound would take the lead ahead of the field, though fell back to second at lap 14 virtue of his brother Jamie Bound taking the top spot. For Jody, it marked another runner-up finish, but the ability to retake back the points lead by 10 points.

The driver of the No. 5 Midas of Orangeville, Interstate Batteries,Team KOS, NTN Bearings,and Larry’s of Orangeville would get his chance to shine when the series headed to Full Throttle Motor Speedway at the beginning of September. He would take the lead partway through the 25 lap feature, holding off Richard Woodland through the rest of the event en route to scoring the victory.

The positive momentum would continue to Sunset Speedway a couple weeks later, as Bound would pick up another victory after taking the lead on lap three and not looking back over the course of the season.

Looking to complete the season on a high, Bound headed to Peterborough Speedway’s Autumn Colours Classic looking for a third victory in a row. He had the pieces in hand to accomplish the feat, leading from the first lap all the way till the white flag – when he was passed by his brother Jamie. As a result, it marked his sixth runner-up of the season.

Looking over the course of the season, it was certainly marked with a bunch of highs for the rookie. It goes without saying that no matter which route Bound takes next in his career, he will probably be successful.