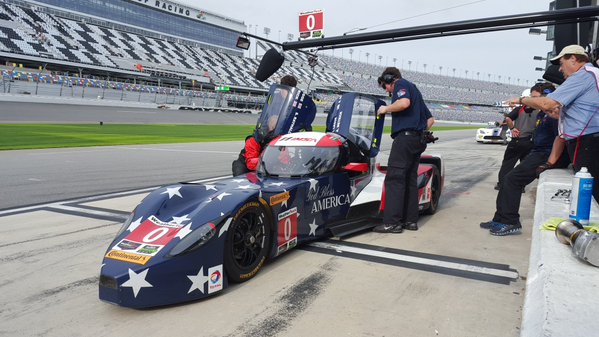 A 45-minute fog delay only seemed to make the teams of the IMSA WeatherTech SportsCar Championship hungrier to post quick times during the second day of the 2016 Roar Before the Rolex 24 test at the Daytona International Speedway’s high banks and infield road course.

Although none of the 13 participants in the headliner Prototype division were able to come close to matching the pace shown by Michael Shank Racing’s Olivier Pla on Friday, the two sessions run on Saturday in dry conditions indicate that several teams are within range of contending for the overall victory in three weeks time in the actual event itself. In the morning efforts, the Dr. Don Panoz-entered DeltaWing DWC13 coupe once again made headlines as Katherine Legge turned heads with an impressive one minute, 40.137 second pass of the 3.56 mile layout, snatching the top effort of the practice round in its final moments. It is the first time that the DeltaWing has ever topped the timing charts in a non-rain affected IMSA sports car session, since the debut of the unified championship in 2014. After claiming the best of the rest honors behind the two Ligiers from Shank Racing and Extreme Speed Motorsports respectively on Friday, the Panoz team would end up fourth on the overall chart after Saturday’s afternoon session.

Despite the barrage of fast times posted by LMP-2 based cars, Wayne Taylor Racing’s Ricky Taylor showed why the Daytona Prototypes have won the first two Rolex 24 at Daytona events under IMSA sanction. The older of the two sons of team boss Wayne Taylor posted the day’s fastest time at one minute, 40.032 seconds during the afternoon action on Saturday. Of the Daytona Prototypes present at the World Center of Racing, the Konica-Minolta backed No. 10 Chevrolet Corvette DP has consistently been the quickest in the four practice periods to date, topped only by the Action Express Racing No. 5 Corvette DP of Filipe Albuquerque, whom on Saturday morning went just one tenth of a second quicker than the Taylor entry.

Also among the winners in the Prototype category is the increased emergence of the SpeedSource-run Mazda Motorsports program, which during the offseason switched from the SkyActiv-D diesel powerplant, to a gasoline powered, two-liter turbocharged V-6 engine. The change has seemed to pay immediate dividends this weekend in Daytona Beach, as evidenced by the strong lap posted by Mazda Road to Indy prospect Spencer Pigot, who came within five one hundredths of a second of matching Taylor’s effort. In addition to the pace of Pigot, teammates Jonathan Bomarito, Tristan Nunez, and Joel Miller also managed to break into the 1:40s during Saturday’s two sessions.

While there have been some winners in Prototype, other teams in the division continued to struggle on Saturday. After four sessions of action, defending Rolex 24 at Daytona overall winners Chip Ganassi Racing’s highest placed Ford EcoBoost Riley DP is tenth on the speed chart, while last year’s IMSA WeatherTech Championship runners-up Visitflorida.com Racing suffered through mechanical issues on Saturday afternoon and were unable to make any progress toward reaching the top ten.

In Prototype Challenge, CORE autosport’s quickest lap from Friday was also not overcome by the field on Saturday, however several teams have shown that the supposed domination by the Jon Bennett-run squad is still far from a guarantee. Starworks Motorsport who was closest to CORE on Friday, led the way in the morning efforts as Maro Engel placed the team’s No. 88 entry on top of the session at one minute, 43.175 seconds. Two other challengers also emerged in the afternoon runs, including reigning Rolex 24 PC champions PR1-Mathiasen Motorsports as team leader Tom Kimber-Smith came within a tenth of a second of matching Engel’s morning effort. Also making noise was BAR1 Motorsports in the form of a relative unknown. Austria’s Lucas Auer, who competed in his first year in the German DTM Touring Car Championship last year, posted the second fastest time of the afternoon in PC, just a tenth of a second behind Kimber-Smith’s fast pass. Although not at the top of the charts in either of Saturday two dry weather sessions, CORE still managed to stay near the top of the charts on day two, backing up its place on top earned on Friday.

In the GT Le Mans division, the fortunes changed a bit for BMW Team Rahal on Saturday. After going 1-2 in Friday’s cumulative time charts, the team’s new pair of BMW M6 GTLMs fell back into the pack of contenders in the class, as engine electrical maladies limited their amount of track time in both dry sessions on Saturday. With the Rahal cars in slow motion mode, Corvette Racing’s third driver Mike Rockenfeller stepped up to post the best lap in the morning’s fog reduced session at one minute, 45.256, followed closely by Chip Ganassi Racing’s new Ford GT in the hands of ex-Corvette driver Richard Westbrook. During the afternoon action, Westbrook backed up his times, while also having to deal with a new challenger: the Scuderia Corsa Ferrari 488 GTE of Alessandro Pier Guidi. The European grand touring sports car veteran, who claimed victory at Daytona in the GT Daytona division two years ago, posted a fast lap at one minute, 45.266 seconds all but matching the personal bests from both Ford and Corvette on Saturday. Pier Guidi’s effort is the first significant presence at the point shown by Ferrari’s newest challenger at the Roar Before the Rolex 24, a test session minus the lone full-time Ferrari IMSA runner this weekend. Houston-based Risi Competizione who continues to put the finishing touches on their own 488 GTE across the Atlantic Ocean in Italy, are absent from Daytona, but are expected to make a solid showing in three weeks time. The squad announced Saturday that Giancarlo Fisichella, Toni Vilander, and Davide Rigon will pilot the team’s No. 62 entry in the Rolex 24.

While four different manufacturers have taken turns near the top of the speed list in the first four sessions of action this weekend, reigning IMSA GT Le Mans series champions Porsche North America have not been among them. After dominating the second half of the 2015 IMSA WeatherTech season, the CORE autosport-run team has been a little bit off the pace after getting a late start this offseason on getting their Porsche 911 RSRs updated to the division’s new for 2016 technical regulations.  While not in the top five overall in GTLM after four windows of running, Michael Christensen showed some positive steps have been made on Saturday afternoon, pulling within a half second of the top time posted.

While the best time honors have shuffled between different camps in the GT Le Mans class, one team managed to establish itself on top of the chart in the lower GT Daytona division. While not expected to contest the full IMSA slate in 2016, Franz Konrad’s Lamborghini Huracan squad demonstrated Saturday that the new kid on the GTD block in IMSA certainly has pace. Konrad’s lead driver Fabio Babini topped the list in both of Saturday’s dry sessions, maxing out at one minute, 48.309 seconds during the afternoon, the fastest lap around the 3.56 mile Daytona layout posted this weekend in the division. Babini was one of a couple of drivers who proved the new Huracans have a good turn of speed as Change Racing’s Spencer Pumpelly and Paul Miller Racing’s Mirko Bortolotti also posted laps on Saturday in the 1:48 range. Ben Keating’s pair of Riley Motorsports-prepared Dodge Vipers also were among the pacesetters for the second straight day as Jeroen Bleekemolen posted the fourth fastest GTD effort this week just prior to the conclusion of the Saturday afternoon session, which was extended following the fog that limited the runs in the morning.

Stay tuned to OnPitRoad.com for continued coverage of the Roar Before the Rolex 24 and the 2016 IMSA WeatherTech SportsCar Championship.