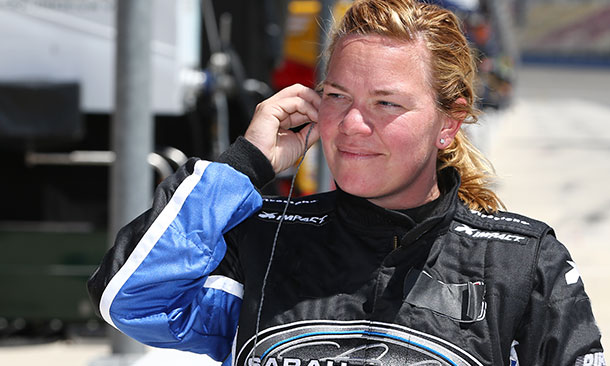 The former Verizon IndyCar Series driver and current CFH Racing co-owner competed in the annual indoor midget race at the Tulsa (Okla.) Expo Raceway inside the River Spirit Expo Center for the first time in 2015. After finishing mid-pack among a field of more than 300 cars, she’s ready to go back this week with a year’s experience.

“Last year I was able to cross the Chili Bowl off my bucket list,” said Fisher, who hadn’t raced competitively before the 2015 Chili Bowl since competing in the 2010 Verizon IndyCar Series season finale at Homestead-Miami Speedway.

“The electric atmosphere and high levels of competition that it brings wasn’t something I could pass up this year. Last year was my first experience with midgets on dirt and it was a challenge. I’m really looking forward to this challenge again.”

“Andy (O’Gara, Fisher’s husband) and I really enjoy working with Kyle on his short-track efforts through SFH Racing Development, and it’s going to be a lot of fun for him and me to both compete at the Chili Bowl again this year,” Fisher said.

Fisher will drive the No. 67SF sponsored by Hartman Oil, Russell Oil and CHS. She is scheduled to qualify during J.C.T. Qualifying Night on Jan. 14.

Another driver with INDYCAR ties competing in the 30th Chili Bowl is two-time Indianapolis 500 starter Bryan Clauson, who won the event in 2014. Clauson helped kick off the first day of competition Jan. 12 by finishing fourth in the Vacuworx International Race of Champions, a one-off event featuring many of the top names competing this week.

The 335 entries this year will compete during four days of qualifying heat races, leading up to the A Main Feature on Jan. 16 with the top 24 drivers from the week. Starting positions in the A Feature are determined by points earned during qualifications.

2. Hawksworth sets pace in ‘Roar Before the 24’: Jack Hawksworth, set to return in 2016 for his third Verizon IndyCar Series season and second with AJ Foyt Racing, ran among the pacesetters in the “Roar Before the 24,” a three-day test session Jan. 8-10 for teams competing in the Rolex 24 At Daytona endurance sports car race at the end of the month.

Driving for Starworks Motorsport, Hawksworth set the fastest lap in the Prototype Challenge category in two of the seven practice sessions, including the fastest overall PC lap of 1 minute, 42.118 seconds (125.502 mph) in the final test session on the Daytona International Speedway’s 3.56-mile road course.

Katherine Legge – a veteran of 39 Indy car races including two Indianapolis 500s – clocked the fastest lap in one session of the Prototype division, driving the unique DeltaWing DWC13. Among Legge’s teammates for the Daytona 24-hour race Jan. 30-31is 20-year-old American Sean Rayhall, who won a pair of 2015 Indy Lights Presented by Cooper Tires races driving a limited schedule.

At least a dozen drivers with current INDYCAR ties are scheduled to compete in the twice-around-the-clock event that kicks off the IMSA WeatherTech SportsCar Championship season. Among them is Chip Ganassi Racing Teams’ Scott Dixon, the reigning Verizon IndyCar Series champion who is also defending his Rolex 24 overall victory along with Verizon IndyCar Series teammate Tony Kanaan in the team’s Prototype.

Beginning Jan. 16, fans can visit the Verizon IndyCar Series display located in Hall D for a photo with Juan Pablo Montoya’s 2015 Indianapolis 500-winning car and receive more information on the upcoming season, which includes the historic 100th Running of the Indianapolis 500 on May 29, from the INDY girls. Helio Castroneves’ No. 3 Hitachi Chevrolet will be located in the Chevrolet Detroit Belle Isle Grand Prix booth in Hall B for photos.

On Jan. 22, the stars of INDYCAR arrive. Four-time Indy car champions Scott Dixon (2003, 2008, 2013, 2015) and Sebastien Bourdais (2004-2007) will be on hand for Family Day at NAIAS. Their day includes: a private breakfast with winners of the grand prix’s Breakfast of Champions contest; a question-and-answer session at noon ET in the Cobo Center Atrium with WXYZ ABC 7, where they will be joined by Hulman and Co. CEO Mark Miles and drivers from the IMSA WeatherTech SportsCar Championship; and a 30-minute autograph session beginning at 12:30 p.m. ET.

4. Six Indy 500 winners slated for Arizona Concours roundtable: Six Indianapolis 500 Mile Race winners, whose victories span four decades, will gather for a roundtable discussion about the “Greatest Spectacle in Racing” hosted by the Arizona Concours d’Elegance on Jan. 23 at the Arizona Biltmore Resort in Phoenix.

The Indianapolis 500 roundtable is part of a weekend celebration of vintage automobiles with the Arizona Concours on Jan. 24 as the centerpiece. The Concours events kick off Arizona’s famous Classic Car Week of auctions, shows and special events.

“We’ve assembled a terrific group of winners of the Indy 500 from different eras with unique stories, and I’m looking forward to bringing out the excitement and energy these drivers share,” St. James said. “They’re bright, they’re interesting and they’re diverse. This is an opportunity to delve into the personalities of the people who drive these exciting race cars.”

The Indianapolis 500 will have a strong presence at the Concours, with four vintage cars from the Indianapolis Motor Speedway Hall of Fame Museum on display: a 1914 Duesenberg, 1925 Miller Junior Eight, 1955 SAC Fireboid Special and 1964 Lotus-Ford. In addition, cars from other collectors on display will be Sneva’s 1978 Penske PC-6, Luyendyk’s backup 1990 Lola-Chevrolet Ilmor when he won his first Indy 500 and Hunter-Reay’s winning Andretti Autosport Honda-Dallara from the 2014 Indy 500.

The Verizon IndyCar Series returns to nearby Phoenix International Raceway for the Phoenix Grand Prix on April 1-2, following an 11-year absence from the track.

5. Of note: Chevrolet Detroit Belle Isle Grand Prix officials announced that part of the weekend entertainment at the track will include a performance by legendary rock band The Romantics on June 4 at the MotorCity Casino Hotel Entertainment Stage. Hailing from Detroit’s east side, The Romantics rose to national prominence in the 1980s with hit songs including “What I Like about You,” “Talking in Your Sleep” and “One in a Million.” The Chevrolet Dual in Detroit presented by Quicken Loans doubleheader takes placeJune 3-5 at Belle Isle Park in the “Motor City,” the seventh and eighth races on the 2016 Verizon IndyCar Series calendar. For more information, visit detroitgp.com . … INDYCAR is well represented on the 2015 American Auto Racing Writers and Broadcasters Association (AARWBA) All-America Team ballot with nine drivers on the list. Nominees in the Open Wheel category are Verizon IndyCar Series drivers Helio Castroneves, Scott Dixon, Ryan Hunter-Reay, Juan Pablo Montoya, Will Power and Graham Rahal. Spencer Pigot, the 2015 Indy Lights Presented by Cooper Tires champion, is among the candidates in the At Large category. Indy Lights driver Jack Harvey is a candidate for the Rising Star Award and Indianapolis 500 starter and NBCSN commentator Townsend Bell is nominated in the Road Racing division along with sports car teammate Bill Sweedler.