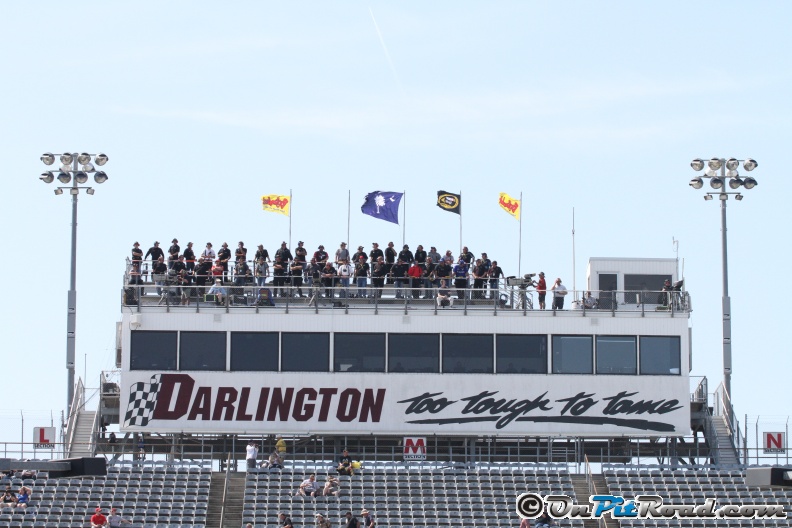 DARLINGTON, SOUTH CAROLINA (January 23, 2016) – Harold Brasington, the man who built Darlington Raceway in 1949-50, was honored by his peers on Saturday, Jan. 23, at the annual NASCAR Hall of Fame induction ceremony in Charlotte, N.C.

“Congratulations to Mr. Brasington and his family for a wonderful achievement. Harold is very deserving of the Landmark Award,” Darlington Raceway President Chip Wile said. “He is one of the great visionaries of the sport, not just for the building of Darlington, but also for his countless contributions to other facilities and being an early pioneer for the sport we all love.”

Brasington’s dream of building a track began after attending the Indianapolis 500 in the 1930’s. He returned with the vision of building a paved racetrack in his hometown of Darlington, S.C. but was delayed by financial constraints and World War II in the mid-1940’s. Brasington finally got the break he needed to begin his dream project in a very unlikely manner.

It was because of a simple conversation during a poker game between Brasington and J.S. (Sherman) Ramsey that the racetrack stands where it is today.

Jim Hunter’s ‘50th Anniversary of Darlington Raceway’ book (©1999, UMI Publications) states that towards the end of that poker game on Sept. 4, 1948, Brasington asked Ramsey about using some of his property to build his racetrack on and, with Ramsey paying most of his attention to the poker game said, “Sure,” then added, “Now deal the cards!”

Soon after, Ramsey returned from an out-of-state trip to see Brasington’s earthmovers, bulldozers and dump trucks moving dirt to make way for his track. Brasington had taken their poker game conversation more seriously than Ramsey realized. The track would take shape in 1949 and eventually host the first Southern 500 on Labor Day in 1950 featuring 75 cars in the starting field.

Following the construction of Darlington Raceway, Brasington went on to build Rockingham Speedway (then North Carolina Motor Speedway) in 1965 as well as several other tracks in the South. He was also Curtis Turner’s original partner when Charlotte Motor Speedway was conceived in 1960, before selling his interest to Bruton Smith prior to construction beginning.

“Harold’s bold construction of Darlington in 1950 ushered in the superspeedway era and was the catalyst that solidified NASCAR’s early future,” Richard Petty, NASCAR Hall of Famer and one of the sport’s most recognizable figures said last May when the Landmark Award was announced. “Harold was an early pillar of racing and his many contributions and accomplishments deserve to be remembered.”

The Tradition Continues on Labor Day weekend as the NASCAR Sprint Cup Series Bojangles’ Southern 500® is set for Sunday, Sept. 4, 2016. The NASCAR XFINITY Series VFW Sport Clips Help A Hero 200 will race on Saturday, Sept. 3, 2016. You can keep up with all of the latest news from Darlington Raceway at DarlingtonRaceway.com, on Facebook atFacebook.com/DarlingtonRaceway and on Twitter at Twitter.com/TooToughToTame.

Darlington Raceway is the proud recipient of the 2015 NMPA Myers Brothers Award. The award recognizes individuals and/or groups who have provided outstanding contributions to the sport of stock car racing.