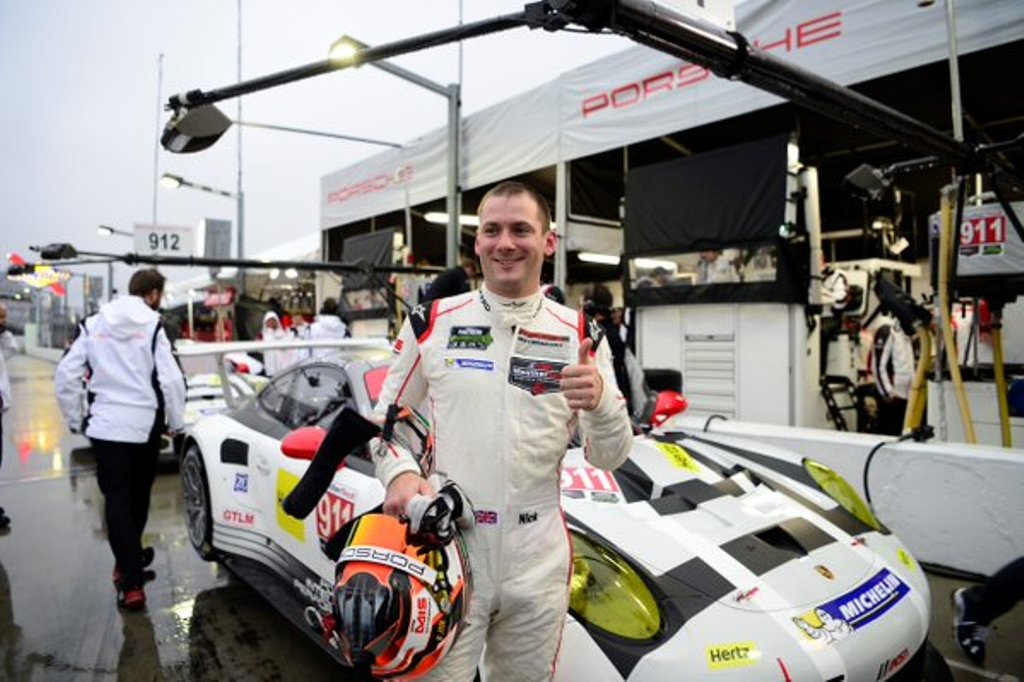 It was almost a sense of deja vu for the IMSA WeatherTech SportsCar Championship during opening day Thursday for the 2016 running of the Rolex 24 at Daytona. As was the case in last year’s season finale at the Petit Le Mans at Road Atlanta, a torrential downpour plagued the entire day on track action, making fast times virtually impossible. Yet, for the second straight time in this scenario, a prototype-classed car did not come out on top.

Porsche North America, who shocked the sports car racing world by claiming the overall win last fall in the rain shortened event in the state of Georgia, took advantage of similar conditions at the 3.56 mile combination oval and road course at the Daytona International Speedway to earn the overall TOTAL Pole Award for the twice around the clock classic. England’s Nick Tandy, who claimed overall victories at both Road Atlanta and Le Mans in 2015, once again dominated in the wet conditions, eeking out an impressive two minutes, 1.408 second lap in the difficult circumstances. The effort was amazingly over four seconds faster than the best placed prototype after qualifying.

The effort was a reversal of fortunes for the CORE autosport-run squad, who struggled for pace over two weeks ago at the Roar Before the Rolex 24 open tests in dry conditions. In addition to Tandy’s pole winning run, the team’s sister entry was second fastest overall with Earl Bamber just a second off of Tandy’s time. In a results chart that sort of mimicked the wet race action last year in Atlanta, entries from the GT Le Mans division posted the top seven times in the session.

The fastest prototype time in fact, was not from the headliner Prototype division either. It came courtesy of BAR1 Motorsports in the Prototype Challenge division, as Johnny Mowlem claimed the PC pole position at Daytona for the second consecutive year. Mowlem’s two minutes, 5.708 second run was a full two seconds clear of the next highest placed PC entry, the JDC-Miller Motorsports machine driven by Stephen Simpson.

Amazingly, the TOTAL Pole Award winner in the Prototype division, was nearly overtaken by all three fast qualifiers in the other three classes. The Russian-based SMP Racing, whose BR01-Nissan coupe is making its North American race debut this weekend, claimed the top time on Thursday afternoon, with Verizon IndyCar Series regular Mikhail Aleshin clocking in at two minutes, 5.793 seconds. The effort was six tenths of a second clear of the Tequila Patron ESM Racing Ligier-Honda, piloted by Pipo Derani.

Finally in GT Daytona, Park Place Motorsports made it a clean sweep of the pole positions for Porsche in the grand touring ranks, as Norbert Siedler posted the tenth fastest overall time in qualifying at two minutes, 5.798 seconds, ironically coming within five one thousandths of  a second of the Prototype pole time set by Aleshin. The new Porsche 991 GT3-R, will be joined on the GTD front line by another new runner: the Lamborghini Huracan GT3 entered by Konrad Motorsport.

Although a GT Le Mans class car claimed the overall pole position, the protocol for the start of the race on Saturday afternoon will revert to its regular layout where the Prototype and Prototype Challenge runners will take the green flag first, followed by a separate start for the GT Le Mans and GT Daytona runners about fifteen to twenty seconds after the first flight. With the chances of rain for Friday, Saturday, and Sunday at Daytona all currently projected at zero percent, it will make for a very interesting opening hour of the Rolex 24 at Daytona, as the faster cars look to make their way to the front.

Stay tuned to OnPitRoad.com and follow us on Twitter (@OnPitRoad_ & @MattEmbury) for updates throughout the Rolex 24 at Daytona on both Saturday and Sunday.