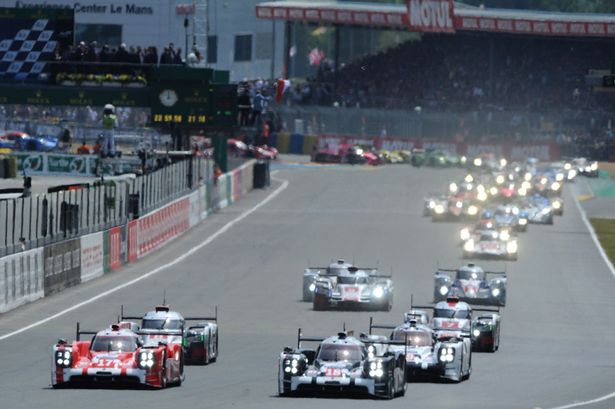 There were two big surprises on Friday afternoon in Paris, France as the initial entry list for the 84th running of the 24 Hours of Le Mans was revealed. First, instead of the expected 58 entries that had been announced as the maximum for 2016, the transition to a 60-car grid that was planned for 2017 was moved up to this year, based on the massive interest by sports car teams around the world in terms of potential entries. The second however, was not a positive one as at least one big name team will be absent from the field despite a resume that trumps most every other non-factory entry on the list.

As expected, the headliner LMP-1 division is smaller as opposed to the massive 14-car lineup that appeared on the starting grid at the 8.45 mile Circuit de la Sarthe mix of public roads and permanent racing circuit last year. With Nissan ceasing its troubled LMP-1 project in December, plus Audi and Porsche cutting their attacks from three entries to just two, the 2016 fleet will feature only nine entries from the class’ mix of hybrid powered screamers along with a trio of non-alternate technology runners.

Team Porsche returns to defend its title from a year ago, but without the services of its winning team from last June. Scheduling conflicts with the Formula One European Grand Prix in Azerbaijan will prevent Force India veteran Nico Hulkenburg from a return trip to Le Mans, while co-drivers Nick Tandy and Earl Bamber will return to GTE-Pro competition with Porsche North America’s two-car entry. Audi and Toyota return with heavily upgraded mounts, each featuring new battery-based hybrid power units for 2016. Reinhold Joest’s squad looks to return to its winning ways at La Sarthe, having only lost on three occasions since joining forces with Audi in 1999. After being the rabbit of the LMP-1 challengers in 2014, Toyota Gazoo Racing looks regain its footing after a lacking for pace frustration in 2015, where they were rarely able to challenge either of the German marques on a regular basis.

While the hybrid club membership has dropped from four to just three for 2016, the regular petrol propelled top class squads remain unchanged for the 84th edition of the Grand Prix of Endurance as both Rebellion Racing and Dr. Colin Kolles’ squads return with their own AER-powered coupes, which like the other LMP-1s will race full time in the FIA World Endurance Championship, which begins in April at the Silverstone Circuit in England.

Of the four categories featured at the 24 Hours of Le Mans, the largest in the field is once again represented by the LMP-2 division with 22 cars on the initial entry list, plus technically the Morgan LMP2 machine designed for quadruple amputee Frederic Sausset, the holder of the special Garage 56 entry for the 2016 edition of the 24 Hours of Le Mans. A number of familiar names will return to the garages on the Circuit de la Sarthe pit straight, including last week’s Rolex 24 at Daytona overall winners from Extreme Speed Motorsports, which will field two entries in June for the second straight year. However, unlike at Daytona the team’s Ligier JS P2 coupes will feature Nissan V-8 power as opposed to the Honda turbo V-6 they utilized in triumph last week. With Tequila Patron not allowed to be featured on the car in France due to a banishment of alcolhol and tobacco advertising at sporting events, the team will feature a different livery in June. Last year, Rolling Stone magazine sponsored the two-car entry in its Le Mans debut.

Also among the LMP-2 field is IMSA regular Michael Shank Racing, who like ESM last year are Le Mans newcomers. John Pew and Oswaldo Negri will represent two-thirds of the driver lineup, in a Ligier coupe that will feature last year’s 2.8 liter Honda V-6, as the FIA-ACO have yet to approve the 3.5 liter Honda engine used at Daytona last weekend for competition at Le Mans. Tracy Krohn’s squad also runs a Ligier coupe, but the team like ESM has switched to Nissan engines after running a Judd in 2015. The Ligiers are not just a common thread for American-based teams. Eight of the 22 invitees in the baby prototype class will utilize the Onroak-designed car with six featuring Nissan’s 4.5 liter, V-8 powerplant. Another intriguing Ligier squad for 2016 is a new entity formed by former Monaco Grand Prix champion Olivier Panis and 1998 FIFA World Cup soccer winning goalkeeper turned race car driver Fabien Barthez.

ORECA’s own 05 coupe, which dominated last year’s 24 Hours of Le Mans with the Hong Kong-based KC Motorsport Group is also present in a greater form in 2016, with seven teams using the second-year coupe plus two teams calling upon the aging, yet still effective open top ORECA 03R design. Despite no longer participating in the FIA WEC this season, KCMG is back to defend its title from a year ago, with Japanese veteran pilot Tsugio Matsuda leading the effort. European Le Mans Series regular Thiriet by TDS Racing is also back with ORECA, while Phillipines-based Eurasia Motorsport, Russia’s G-Drive Racing, and Formula One constructor Manor Racing are new to the successful chassis in 2016. Also new to the car is the Alpine firm, who have re-badged the coupe as an Alpine A460.

Also among contenders outside of the Ligiers and ORECAs for victory in LMP-2 are former class winners Strakka Racing with a Gibson 015S open top car and 2016 Rolex 24 at Daytona pole winners SMP Racing who return with their own BR01 coupe.

The influence of IMSA’s factory supported entries in the GT Le Mans division, is clear to the naked eye when looking at the 24 Hours of Le Mans equivalent; the GTE-Pro division. Of the 14 cars invited to compete, seven took the green flag at the Rolex 24 at Daytona last weekend, led by the 1-2 finishers from Corvette Racing who return to Circuit de la Sarthe as defending race winners from 2015. As mentioned above, Petit Le Mans overall champions Porsche North America have taken over the 911 program at Le Mans for 2016, whilst joined by Dempsey-Proton Racing, who move up to the Pro division after finishing second in the Amateur class last year.

IMSA and Ferrari aficionado Risi Competizione returns to La Sarthe in 2016 after an extended absence, joining FIA WEC regular AF Corse to represent a three-car attack with Maranello’s newest challenger the 488 GTE. Prodrive also returns to the 24 Hours of Le Mans with two upgraded Aston Martin Vantages for 2016, electing to debut their update to the new regulations car at Silverstone, unlike the other major players did at Daytona.

Of course, one of those key players is Ford Motor Company, who look to bounce back from a frustrating debut last weekend at Daytona, with a four-car entry at La Sarthe in June. Two of the new Ford GTs will feature Chip Ganassi Racing’s IMSA-based lineup, while the other two will represent George Howard-Chappell’s half of the operation, which will compete in the FIA WEC in 2016.

While most of the expected teams made the cut in the first three classes, there was one notable exclusion from the lineup in the GTE-Amateur class. Despite winning last year’s Rolex 24 at Daytona and running among the top three in GTE-Am through the first three-quarters of last year’s 24 Hours of Le Mans, Riley Motorsports’ Dodge Viper GTS-R was not given an invite into the 60-car field by the FIA-ACO, in which 14 entries were in GTE-Am. Despite their noticeable absence, plus the decision by reigning Le Mans GTE-Am winners SMP Racing to focus solely on LMP-2 in 2016, the grid for the lower grand touring classification still has some notable members, led by amateur division powerhouses Aston Martin Racing and AF Corse Ferrari, which between them account for four entries between them coming up in June.

AMR came within one hour of winning Le Mans a year ago, only to have a late race accident at the Ford Chicane deny them. European Le Mans Series’ defeding GT champions TDS Racing will also enter a Vantage in June, while Asian Le Mans Series GT champs Clearwater Racing from Singapore and IMSA regulars Scuderia Corsa will bolster Ferrari’s numbers on the grid, with five 458 Italias to be present in the amateur class, the most of any manufacturer.

Riley Motorsports was not the only notable American team to be missing from the main field. Elton Julian’s DragonSpeed squad was also omitted from the field on Friday. The ORECA 05 coupe runners, who plan their to make their 2016 debut next month at the Mobil 1 12 Hours of Sebring had hoped to make their debut at Le Mans in addition to a full-time effort in the European Le Mans Series in LMP-2. Although both squads made the reserve list, the chances to be added to the grid do not look promising as the entries are seventh and eighth on the preference list respectively. Despite two glaring omissions, the overall number of American-based entries will increase greatly from the 2015 event where only seven cars were present. Assuming there are no withdrawals prior to race weekend, 12 cars from the Stars and Stripes will be track side this year.

Stay tuned to OnPitRoad.com for further updates from the world of sports car racing as the Road to the 24 Hours of Le Mans begins.