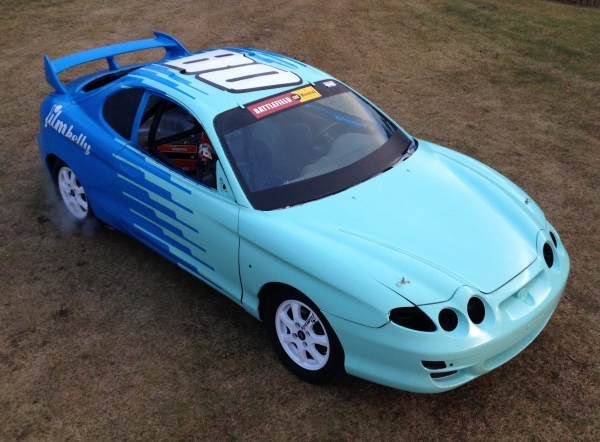 (February 8, 2016)- A new campaign of action at Canada’s Toughest 1/3-Mile Paved Oval is still several months away, but off-season moves are making headlines and putting the tight, tricky bullring on Mount Pleasant Road west of the Liftlock City on the motorsports map.

After a number of seasons with the INEX Ontario Legends – including a career best point finish of third in 2011 – Paul Pierik will move to Peterborough Speedway’s Earl Ireland Auto Sales Late Model division to kick-off the new calendar. Pierik says he’s anxious to get back behind the wheel and is looking forward to the first green flag of 2016.

“I took a few years off after moving to the Niagara region for work commitments,” said the 49 year-old, who has recently relocated to Hastings. “My original plan was to run with the Legends again, but a work related matter took me to Larry Crowe Sr.’s shop and we were able to make a deal on a car he was looking to sell. We’ll have some sponsorship help from Hastings Marine Service on our #33 machine.”

Pierik won’t be the only newcomer in the Saturday night Late Model ranks this season.

After running a limited schedule in the Mini Stocks over the last couple of years, James Horner will move into the bigger and faster ride in the track’s headline division. And while he’s hardly breaking new ground, veteran campaigner Mike Wallace has been spending the off-season getting a new car ready for battle.

“It’s a McColl Racing Enterprises chassis we picked-up from Bryan Watts,” said the driver who scored his first career feature win late in the 2015 calendar. “Having run only two events previously, the car is practically brand new. The team is getting everything ready for opening night and the goal is to run for a track championship. We’re working on getting some new sponsors signed-up and will unveil everything at the Motorama Custom Car and Motorsports Expo, March 11-13 at the International Centre.”

In the Battlefield Equipment Rental 4Fun division, Jeremy Kelly will be looking to improve on last year’s fourth place point finish in a car he’s reworked from top to bottom since the final checkered flag of the Autumn Colours Classic. He says its been a lot of hard work, but should be worth the final reward.

“This will be just my second full season of action and I’m confident that everything we’ve done will help find a way to victory lane,” said Kelly, who recently celebrated his 29th birthday. “In addition to the changes on my car, there has also been work on my brother Jake’s and an ice racing project to keep the motorsports fires burning in the chilly winter nights.”

Peterborough Speedway’s 2016 calendar gets underway Saturday, May 21. A first look at the new schedule is available now on the track’s web-site.

Fans can always find the latest off-season news at www.peterboroughspeedway.com, by liking the track on Facebook or following it on Twitter. You can also download the free Peterborough Speedway app on your Smartphone.