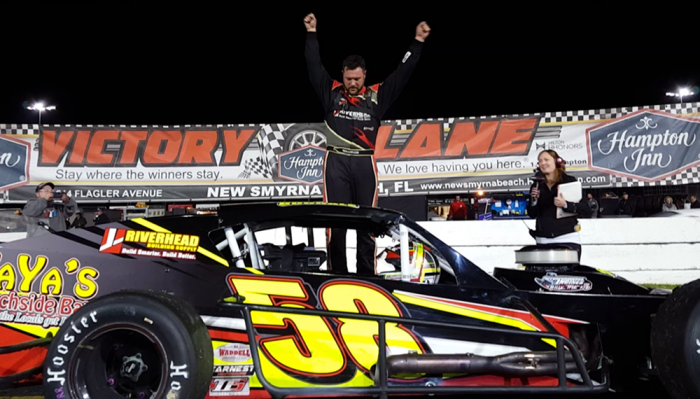 Unlike last year, when late-race heroics earned him the victory, Goodale took the lead on Lap 50 and held off a late charge from Ryan Preece to take the victory on Night 6 of the World Series of Asphalt Stock Car Racing.

“It’s just a good shout out to my team – they put a lot of hard work in,” Goodale said. It just feels great. To win a race in honor of John is extra special.”

A caution with six to go gave Preece one more shot at Goodale, but the 25-year-old Riverhead, New York, driver was able to hold onto the top spot.

“I did not want it,” said Goodale of the late yellow flag. “With Preece, Bonsignore and Silk in the field, it’s never easy knowing those guys are hounding you down. I thought I did a good enough job to conserve my tires there in the beginning of the race. And sure enough, it proved to be the right move.”

Goodale said he was well aware of Preece.

“I saw him in my mirror,” said Goodale. “I know what that car looks like in my rear view. I knew he was coming.”

Preece, who settled for second, noted his car was too loose in Tuesday’s opener and a tick too tight Wednesday.

“I was just trying to find a way to get my car to hook up,” said Preece. “I could catch him, but I wasn’t going to have enough to go by him.”

Austin Pickens and Cliche both took the lead in the first two-thirds of the race as the three notable veterans elected to conserve their tires. Goodale was the first to get to the front, on Lap 50, and was quickly followed by Preece and Bonsignore. Preece spun on the backstretch after contact with Pickens, but rallied to get back to second for the final laps.

Burton made several attempts to wrest the lead away from Majeski, pulling alongside him three separate times. They even went side-by-side for three laps midway through the race. But Burton said his car was too loose to complete the pass.

“I’ve got a lot of respect for him; he could have come up and doored me anytime and taken the lead,” said Majeski, who also has two runner-up finishes on the week. “I was able to hold him off on the bottom. It was definitely a good battle with him and I tonight, and last night. Thankfully tonight we were able to come out on top.”

Cody Stickler walked away with the Florida Modified feature win.