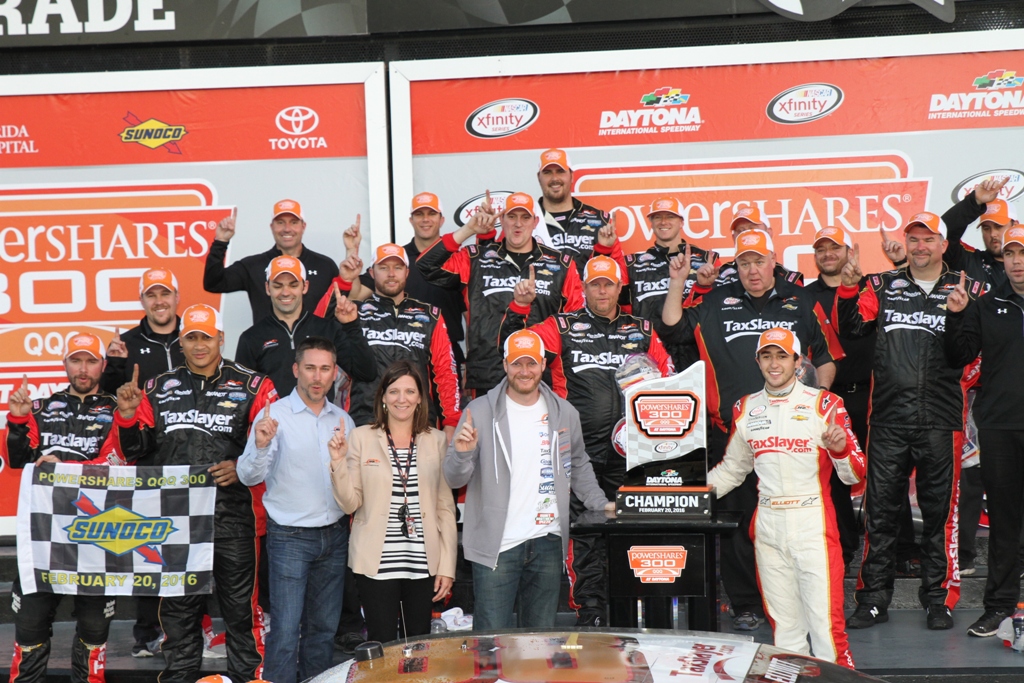 To say it has been a pretty good SpeedWeeks  for Chase Elliott is quite an understatement.

Elliott started out by winning the pole for tomorrow’s Daytona 500, then went on to finish sixth in his Can Am Duel race on Thursday night. Elliott added to his resume on Saturday afternoon by holding off Joey Logano in a wild last lap scramble to win the PowerShares QQQ 300 at Daytona International Speedway. The win marked Elliott’s fifth in XFINITY Series competition.

“It was a heck of a battle”. Elliott said. “Huge thanks to Tax Slayer, JR Motorsports and the Hendrick engine shop. I had a great car and was in the right spot at the right time and just able to hold him off”.

Logano, who came home second, was disappointed in not getting a win for his new crew chief Brian Wilson.

“Chase did a great job out there and Kasey did a great job pushing me”. Logano said. “I was sitting there thinking that he wouldn’t push me by his teammate so my next move was to latch on to the 88 and put him out there and then try to make the move. He knew that I wanted the outside and I went there, and just got in there a little late and he was able to block it off. Dang it. I’m sick of finishing second. Great move right there when we started touching each other. The Ford was fast – was hoping to get him (Brian Wilson) one in his first race”.

Elliott’s win was just the beginning of a banner day for JR Motorsports as three of their entries finished in the top five with Kasey Kahne finishing third, followed by Elliott Sadler in fourth. Justin Allgaier, driving the team’s fourth entry, finished 12th.

“My role was to get to the lead and the best way to get there was pushing Joey”. Kahne said. “Chase got in the row that was coming and then those two hooked up and drove away”.

“I can’t tell how proud I am of everybody back at JR Motorsports”. Sadler exclaimed. “They built me such a great race car and they gave me such a great opportunity. We were in position – that’s all we can ask for. I had the open way to get up there once he went up. The 6 wasn’t able to push me as hard as the 22 was pushing the 88. Really proud of this race team. Great start out of the gate”.

For the most part, the race ran clean, except for a multi-car wreck at lap 11, which took both Joe Gibbs Racing teammates Erik Jones and Bobby Labonte, among others, out of the running. The bottom lane would get bottled up virtue of Austin Dillon trying to back the line up to get a run on Logano, causing contact to ensue, with Elliott tagging Labonte, sending him sideways and through the grass.