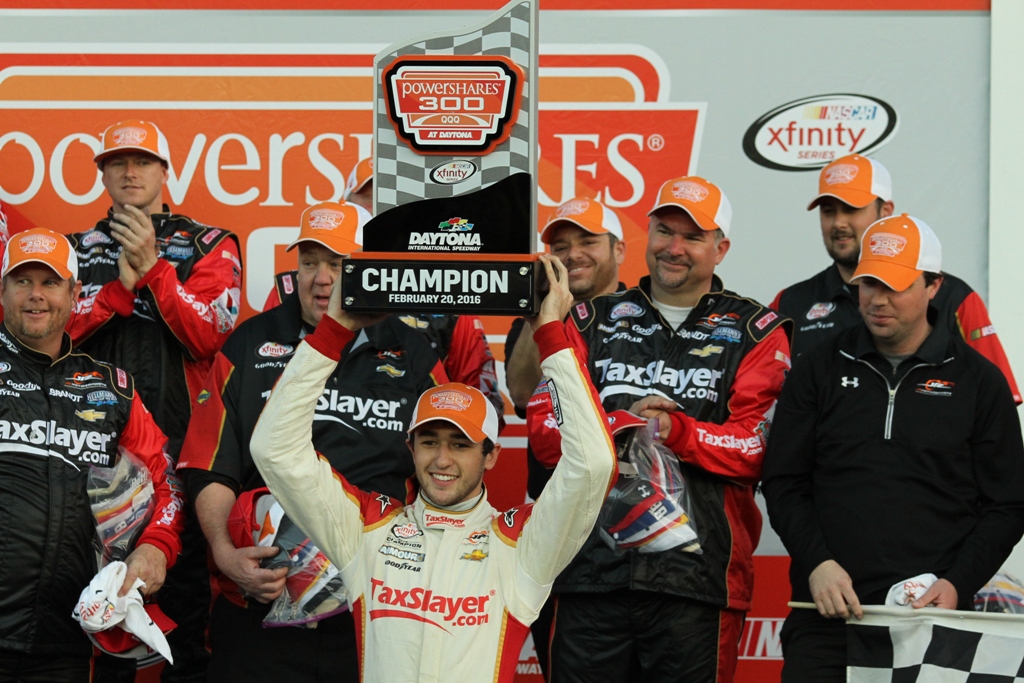 Racing at Daytona International Speedway for the first time in the Sprint Cup Series can be a daunting task for anyone, no matter the talent level. Just ask Chase Elliott. The rookie earned his stripes through the Cam-Am Duel event, getting shuffled up and down, how to get shuffled out of line and more.

With everything new surrounding him there, the 20-year-old returned back to his familiar grounds of the past two seasons, the NASCAR XFINITY Series, for some added drafting practice. It turned out successful as he was able to hold off a late-race charge from Joey Logano coming to the line to score the victory.

While it has taken him time to get used to drafting style of the Sprint Cup Series, Elliott seemed at ease in knowing the right places to put the No. 88 Tax Slayer Chevrolet on Saturday afternoon. Elliott says that comes with having raced in the series over the past couple of years and growing used to the rules.

“There’s such a different style of drafting,” he noted. “These cars are all about the pusher and really getting on a guy and pushing that limit of the rule of not locking bumpers.  It seems like if you have a guy behind you that’s really good at that, isn’t going to get you in trouble, usually that lane moves forward. Whereas the Cup cars, they get spread out and have big runs, you get these big shoves, the cars will get pushed way out.”

Though despite the styles being different, it actually could help towards the days ahead. Knowing that he can work the draft to his advantage and score a win gives him in confidence in his abilities behind the wheel, something that a two-time Daytona 500 winner says is key to have when making the necessary moves.

“When you don’t believe in the car, you don’t make as many moves, take as many risks, or take opportunities and runs that develop.  You tend to second-guess some of the things you’re doing,” Dale Earnhardt Jr. commented post-race. “I mean, you go out there and win these races, you feel like, ‘Hey, I’m getting somewhere’.  You’re starting to learn, starting to build some confidence.”

Beyond scoring a victory and having some fun, Elliott was able do some homework ahead of the big race in another way. The 300-mile XFINITY event gave him 120 laps of race action working with new spotter Eddie D’Hondt, allowing the pair to get used to each other and know the necessary calls to be made.

“It has been good working with Eddie for a week now,” Elliott said. “We had a good conversation this afternoon as to some of the things that we wanted different from the Duels to Sunday.  I thought today was a good opportunity to practice some of those things.  He did a great job of giving me the information I needed.”

Now with eight practices and a pair of races in the books,  it’s time to see whether he can score a high grade on the big test and do well in the Daytona 500. He’ll be able to start it off right, though, as he will lead the field to green on Sunday afternoon.