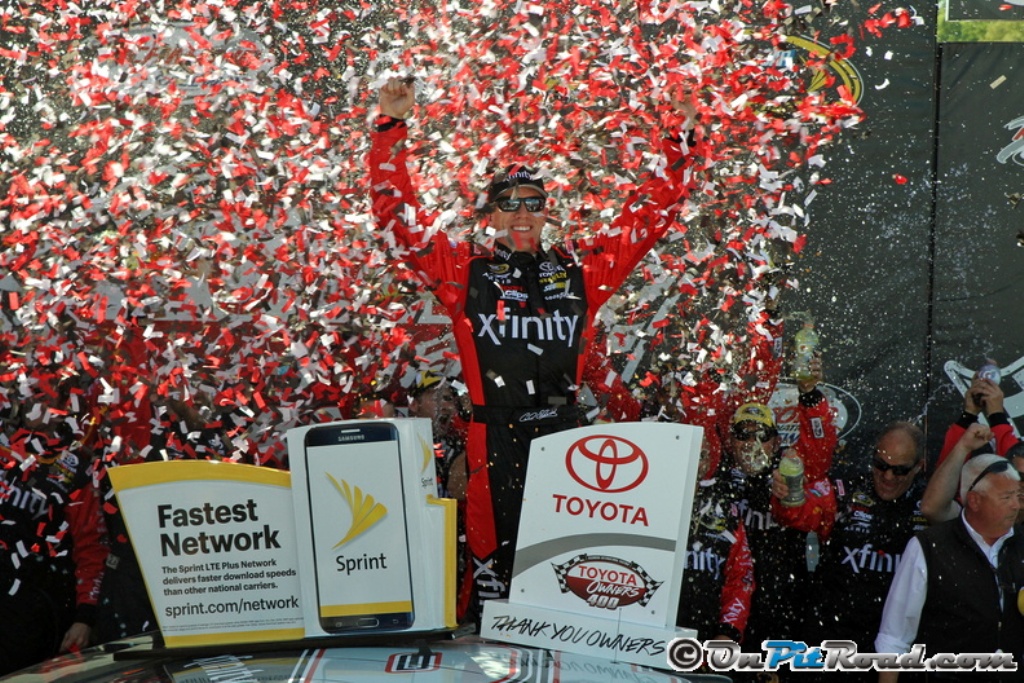 Carl Edwards led 150 laps early in the race, and it seemed like he was going to finish second after dominating the early portion of the race until he made a last lap bump and run on teammate Kyle Busch to win at the Richmond International Raceway.

It was a Joe Gibbs Racing kind of day at Richmond as Edwards had the dominant car, while Kyle Busch also led 78 of the 400 laps. Others showed their hand, though, as the race started with Kevin Harvick leading the field to green. Harvick and Hendrick Motorsports driver Jimmie Johnson led the race early before surrendering the lead to Carl Edwards.

Edwards traded the lead back and forth with teammate Kyle Busch throughout a lot of the race, but with the No. 19 being the stronger car on long runs, he was able to track Busch down in the closing stages of the race and win.

The win was Edwards’ second in a row and the 27th of his career after leading the most laps. Joe Gibbs Racing will go into Talladega Superspeedway next weekend with four consecutive wins.

“Kyle (Busch) was so good there for that run,” said Edwards. “I was doing everything I could. He never spun his tires and if Dave (Rogers, crew chief) hadn’t screamed at me to just go get him that last lap I don’t know if I would’ve dove it in there that well. Just a team effort. I can’t think ARRIS and Toyota enough. It’s a great day for Toyota. They’ve done so much for me. Just everybody – Comcast, XFINITY all of these guys. And, all of the fans. It’s an afternoon race which made it a lot of fun to drive and a bunch of families here. Just very cool. Subway too – it’s a big win for us.”

It seemed like Kyle Busch was on cruise control to score his third win of the season, but as his teammate closed in the No. 18 car, Busch began feeling the pressure. As Busch and Edwards maneuvered through lap cars, the No. 19 got closer to Busch, giving Edwards the chance to make the last lap pass.

“We had a really great car,” Busch said. “The Banfield Pet Hospital Camry was awesome and had really good speed today. Real proud of the guys. We probably weren’t the best car on the long runs today, but Adam (Stevens, crew chief) made some phenomenal adjustments in order to keep us continually getting better as the day progressed there. The pit crew did a great job and got us in position and just kind of gave it up a little bit there on the last lap, but I guess that’s racing.”

Jimmie Johnson wound up third at Richmond after leading 44 laps in the early part of the race. After leading early, Johnson fell back towards the back half of the top-10, but started making his way back to the front near the end of the race.

“It was fun,” Johnson said. “The cars were slipping and sliding; there was a ton of fall off. I enjoyed the long runs. I really like sizing-up guys that I’m racing with and seeing how that works out. And then, at the end we had a bunch of short runs. Thankfully we got our Lowe’s Pro Services Chevrolet tuned-up at the end. We kind of lost our way in the middle part of the race, but we had good pit stops and some great adjustments at the end got us into the top 3.”

Kasey Kahne finished fourth after running inside the top-10 for most of the race. Kahne wasn’t able to contend for the lead during the race, but it was a promising result for Kahne and crew chief Keith Rodden who have struggled since the beginning of the 2015 season. Their fourth-place finish was their best since Kansas Speedway last October.

“The Mountain Dew Chevrolet was great the whole race,” said Kahne. “The pit stops were awesome and just the communication with Keith (Rodden, crew chief) and the team all weekend long; same as last week and same as the weekend before in Texas. It’s been solid and we’re heading in the right direction. It’s been really nice.”

Kevin Harvick was fifth after leading 63 laps at Richmond. Harvick started on pole and led a few laps early in the race before dropping back. The No. 4 car ran inside the top-five for most of the race, and was one of few cars that could hang with the Gibbs brigade out front.

“Well, everybody on our Busch Light/Jimmy John’s team did a good job,” said Harvick. “We started really loose to start the race and got into the wall there and we had to make some more adjustments after I self-adjusted it (laughs). And then, we had a couple of really good runs there in the middle of the race. As we started adjusting on it, we never could get the rear drive to go along with the turns. It’s kind of a balance of where the turn is good enough and you can still manage the drive, but everybody tried everything we could. We threw a lot at it and just never could find that magic balance for the car that we had there in the middle of the race.”

Denny Hamlin and Matt Kenseth finished sixth and seventh, getting all four Gibbs cars in the top-10 at Richmond.

Joey Logano, Martin Truex, Jr., and Kurt Busch rounded out the top-10. Busch was leading near the end of the race until a caution for a spin by Brian Scott with 40 laps to go. Busch brought the field down pit road, but a slow pit stop dropped the No. 41 to the fourth position on the restart. A poor restart relegated Busch to a 10th-place finish.

Tony Stewart finished on the lead lap in 19th in his first race back from injury. Stewart fought through adversity after spending most of the race a lap down and spinning out after cutting a tire down on lap 269.

Edwards’ win propelled him to a seven-point lead over Kevin Harvick in the point standings.