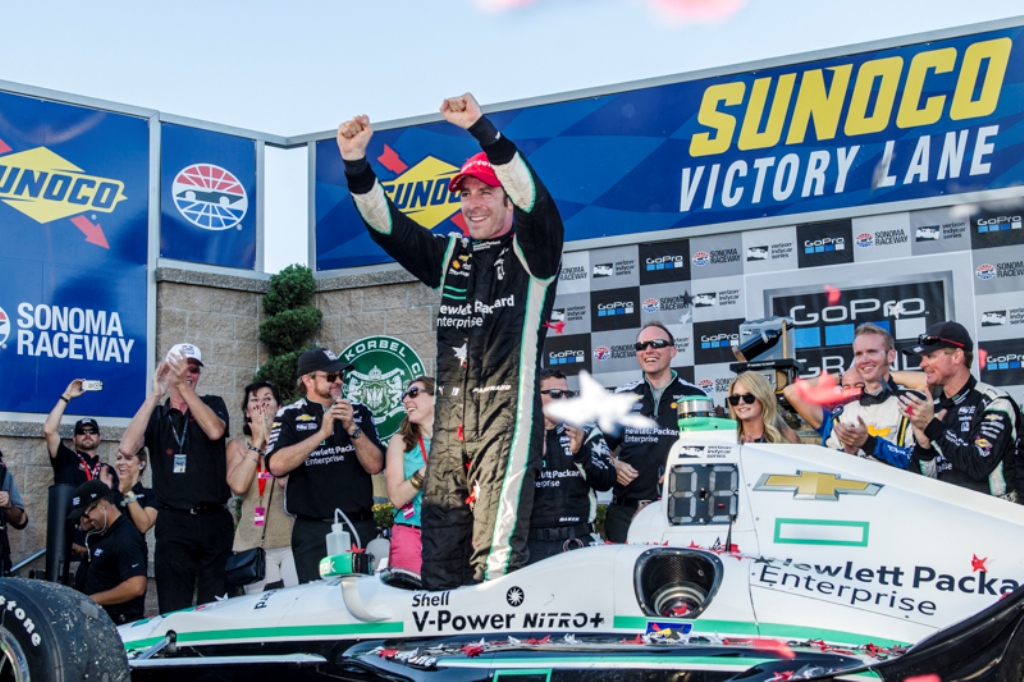 Even if the true battle for the 2016 Verizon IndyCar Series championship had indeed gone right down to the last lap, the result may not have changed much from the way it turned out to be on Sunday as Team Penske’s Simon Pagenaud dominated from the pole position to win the GoPro Grand Prix of Sonoma and also secure the championship.

Although his teammate and championship rival Will Power managed to move up to second place following the first round of pit stops during Sunday’s 85-lap event, the Australian was never able to mount a serious challenge to the Frenchman, who had to finish fifth or better at Sonoma Raceway to secure the title. Ultimately however, it was not just a matter of pace lacking for Will Power, but also a concern of reliability from his Verizon Wireless Chevrolet that ended his quest for a second IndyCar championship. On lap 36, while battling Juan Pablo Montoya for second place, Power’s car suffered a clutch failure which forced the car into neutral and eventually ground itself to a halt on the track.

The incident, which would force the first and only full course caution of Sunday’s race effectively ended any drama for the championship as Power lost several laps in the pits for repairs and finished 20th. Although Pagenaud had secured the title, the race win was put into question as Honda’s top challenger Graham Rahal managed to cut into the Frenchman’s lead late in the race, but was never able to make a serious attempt at taking over the top spot. Rahal and Pagenaud had dueled for the victory earlier this season at Barber Motorsports Park in Alabama, a fight that also went in favor of the Team Penske pilot.

The victory is the fifth in 2016 for Pagenaud and his ninth in North American open wheel competition. Although Power posted a low finish, he still managed to score enough points to claim runner-up honors in the 2016 Verizon IndyCar Series championship, just ahead of fellow Penske driver Helio Castroneves, who finished seventh in Sunday’ s race. It is the first time since the 1994 CART season that Team Penske’s drivers have swept the top three positions in the final championship standings, matching the feats of Al Unser, Jr., Emerson Fittipaldi, and Paul Tracy.

Behind Pagenaud and Rahal in the GoPro Grand Prix of Sonoma itself, Penske’s fourth driver Juan Pablo Montoya completed the race podium on Sunday, while Andretti Autosport teammates Ryan Hunter-Reay and Alexander Rossi completed the top five. The effort is the first top five finish for the former Formula One driver and reigning Indy 500 champion, since his upset victory at the Brickyard in May. The result may also provide some relief and healing for Hunter-Reay and his wife Beccy, after suffering through the tragic loss of Beccy’s father and mother earlier this week. Beccy is the sister of former IndyCar driver and founder of the Stadium Super Trucks Series Robby Gordon.