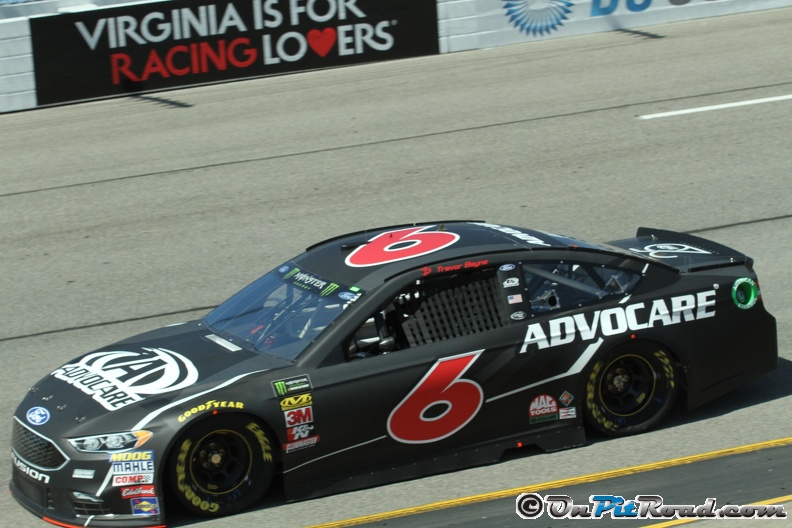 Trevor Bayne won the 2011 Daytona 500 in shocking fashion, the day after his 20th birthday. It was a wildly popular victory with the rookie campaigner from Knoxville, Tennessee getting the Wood Brothers back to Victory Lane on the grandest stage of them all. He began racing full-time in the Xfinity (Nationwide) Series in 2010, racing a Diamond-Waltrip Racing prepared Toyota. During the season, he signed with Roush-Fenway Racing after Diamond-Waltrip was unable to fulfill a contractual obligation by guaranteeing him a full-time ride during the 2011 season.

In 2010, Bayne had six top five finishes and 11 top ten runs in Nationwide Series competition. He signed onto run the full 2011 Nationwide schedule with Roush-Fenway and a part-time Cup gig for the Wood Brothers. He started 2011 with the shocking Daytona 500 victory in Cup competition and had several strong runs in the Nationwide Series. Bayne was coming off a pair of sixth place finishes at Talladega and Nashville in 2011 that had propelled him to fourth in the season point standings. Then, things took a dramatic turn.

Bayne became sick after the race in Nashville. He was experiencing nausea and fatigue, making several trips to hospitals, including a week-long stay at the Mayo Clinic in Rochester, Minnesota. Bayne was able to return to full-time Nationwide competition after missing five races. He completed the remainder of the 2011 Nationwide races with four more top five finishes, and a win during the fall race at Texas Motor Speedway. After returning to the Wood Brothers Cup ride, his best run the remainder of the season was a 15th place effort at Talladega in October.

During the 2013 season Bayne was diagnosed with multiple sclerosis, a chronic disease that affects the central nervous system, often causing pain, numbness in the limbs, and loss of vision. Scientists still do not know what causes multiple sclerosis, according to the Mayo Clinic. MS causes the body’s immune system to destroy myelin, a fatty substance that protects nerve fibers in the brain and spinal cord. There is no cure for MS; however doctors are able to slow the progression of the disease with medication and physical therapy.

Bayne was brought to the Cup series full time in 2015 for Roush-Fenway Racing. His first top ten finish came during the 15th race on the calendar, at Michigan. He would have another ninth place run at Daytona two races later and a 13th at Kentucky the following week. After that stretch, Bayne had a single top 15 run, during the Bristol night race, for the remainder of the season. He did not lead a single lap of competition during the 2015 season, finishing the season 29th in the point standings.

In 2016, Bayne saw improvement with two top five runs. He finished 5th during the spring race at Bristol and third during the July Daytona event. He would go onto lead 34 laps during the season, and finish in the top ten five times. Bayne finished 22nd in the 2016 points standings.

During the 2017 season, Bayne once again had a pair of top five finishes. He ran fifth during the night race at Bristol and third during the Talladega race in the fall. Bayne led eight laps of competition in 2017, and finished 22nd in the points once again.

So far, during the 2018 MENCS season, Bayne hasn’t been able to crack the top ten. His best finish is a 12th place run at Texas a couple of weeks ago. He currently sits at 26th place in the standings and hasn’t led a lap of competition this year.

For someone that was such a hot commodity upon his entrance into the sport, for whatever reason, Trevor Bayne has struggled to find a strong foothold. There have been flashes of brilliance but ultimately too much inconsistency. I don’t feel that all of the blame can be put at the feet of Trevor Bayne, however. Roush-Fenway Racing has struggled mightily for the past several years in Cup competition. Teammate Ricky Stenhouse, Jr. did manage a pair of wins last year, with both coming at Talladega. Aside from that, the last time a Roush-Fenway car won at a non-plate track was all the way back in 2014, with Carl Edwards winning the road course race at Sonoma.

Matt Kenseth will split the Roush-Fenway ride with Trevor Bayne for the remainder of the 2018 season and Bayne’s future at Roush-Fenway is uncertain. Kenseth, a 39 time winner in the Cup series and 2003 Cup Champion, should provide a boost to the team. Don’t look on that as a knock to Bayne, but simply one of the best drivers of the past 20 years was available and willing to help out. Kenseth’s experience and input could help Bayne in the rest of the races he runs in 2018.

However this shakes out, you have to give praise to Trevor Bayne for what he has been able to accomplish in NASCAR. He is a Daytona 500 champion and has 16 top ten finishes in the MENCS to go along with a pair of wins and 73 top ten runs in Xfinity. He’s not just competing on the biggest stage in NASCAR, he’s doing it with a debilitating disease with no cure. Trevor Bayne has inspired many people with multiple sclerosis through his courage and determination. Don’t let that go unnoticed. Whatever happens, Trevor Bayne deserves a lot of credit for what he’s been able to accomplish in NASCAR.

4 thoughts on “The Curious Case of Trevor Bayne”