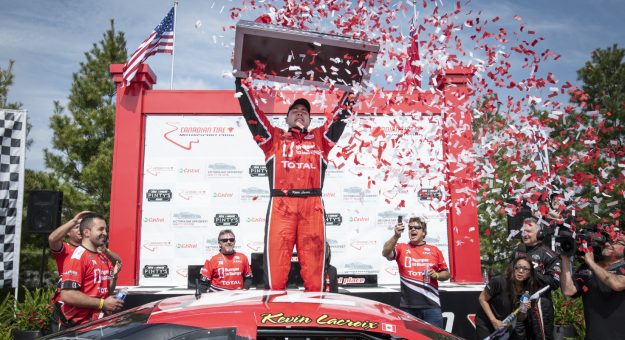 BOWMANVILLE, Ont — One year ago, Kevin Lacroix was in the cat bird seat.

He led 41 of the Clarington 200’s 51 laps, including the white flag lap, but lost the win to L.P. Dumoulin after making contact with Andrew Ranger in the final corner.

This time, Lacroix wasn’t going to be denied.

After gambling on pit strategy by taking tires late in the race, he was on a mission.

In shades similar to last year, Lacroix took the white flag after making a dramatic pass of Andrew Ranger. Lacroix’s No.74 Bumper to Bumper / Total / Gates Dodge was able to hold off Ranger plus a hard charging Gary Klutt to pick up his 11th career win in the Clarington 200.

“Same as last year, I had Andrew on the last lap,” Lacroix said. “It was a little bit stressful in corner five, but this time we kept it clean. We got the win at the end, it was the other way last year.”

“We had the best car, we waited a little bit longer this year to change the tires. It paid at the end, it made the car better and faster.”

It was also a record-setting fourth victory for Lacroix at the historic Canadian Tire Motorsport Park (CTMP). He previously shared the record with Ranger and LP Dumoulin.

Lacroix led a race-high 18 laps. Ranger held on to the runner-up position after leading 10 laps.

“We had the lead and we tried a different strategy,” Ranger said after coming up short. “At the end I was finding that I was a little loose and I knew Kevin was coming very fast. I was really nervous on the last few restarts and he did a great job. He closed in on the back stretch, I tried to save it and he passed me.”

Despite shredding a right rear tire early in the race, Alex Tagliani managed to rebound to finish 11th, while Joe Gibbs development driver Riley Herbst finished 20th after contact on the last lap.

Lacroix looks to become the first driver in series history to open the season with two straight wins. He’s the defending race winner of the APC 200 at Jukasa Motor Speedway, which will be contested this year on Saturday, June 1 at 8 p.m. (live on FansChoice.tv in the United States).