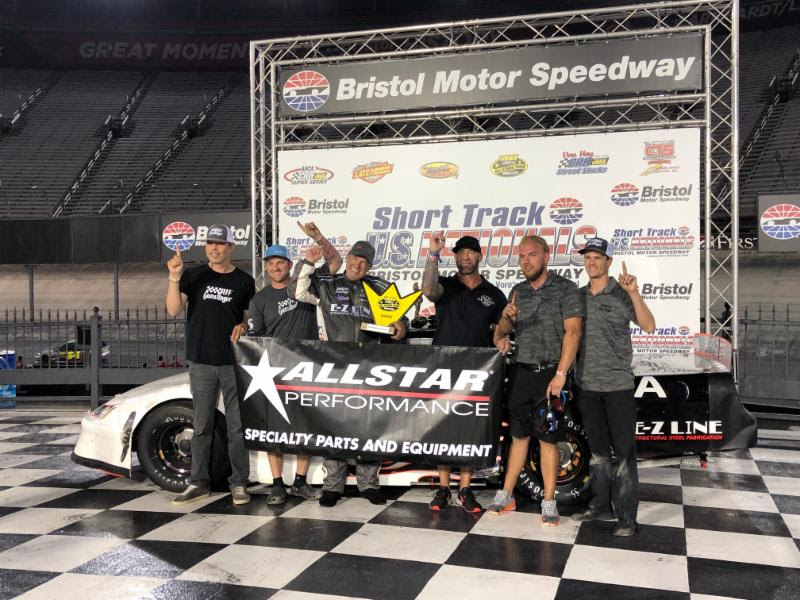 BRISTOL, Tenn. (June 2, 2019) – NASCAR Truck Series Champion Mike Skinner won the Short Track U.S. Nationals at Bristol (Tenn.) Motor Speedway on Saturday night. In a dramatic drive in the No. 5 E-Z Line Toyota, Skinner had to recover from a lap three accident to race through the field and visit victory lane in the Pro Late Model division. It was Skinner’s first win at the half-mile since his 2005 NASCAR Gander Outdoors Truck Series victory.
“Winning at Bristol is amazing,” said Skinner. “The coolest part about the win tonight is overcoming adversity. We had an uphill battle when we sustained damage from debris on lap three, but the boys did an amazing job fixing the car and allowing us to come from the back of the pack twice to race through the field. Bristol is a special place-it will always be one of my favorite tracks. To be able to come here at 62-years-old and win with my two sons, Jamie and Dustin, and our devoted crew members, Richie Penn and Clint Jack, is something I’ll never forget. I’d also like to give a big thank you to one of my best friends Howard Palmer of E-Z Line who made sure that I could fulfill my bucket list to return to victory lane at one of my favorite race tracks.”
Placing within the top three of all four practice sessions, Skinner went out on Saturday afternoon to take the pole with a 14.939-second lap. With an invert of 10, he started the race from outside the fifth row and took on the challenge of traffic as the green flag fell. When another competitor spun in front of him on lap three, one of the suspension pieces off their car got underneath Skinner’s machine to break the master cylinder and puncture in the brake line. Skinner brought his car down pit road under caution for the E-Z Line team to make repairs and returned to the track just in time for the green flag. Restarting in the 25th position, he made his way up to 14th before the caution flag waved again on lap 12. Back under caution, Skinner brought his Toyota down pit road for one last check by the crew. Restarting in the 17th position, he drove into the top 10 by lap 16 and into the top five by lap 25. He overtook the lead during a restart on lap 41 and never looked back. Carefully working his way through lap traffic, Skinner maintained the lead until the checkered flag.
The Gunslinger is scheduled to return to cockpit for the SVRA Vintage Race of Champions event at Indianapolis Motor Speedway, August 1-4, 2019.
Tags: Mike Skinner US Short Track Nationals