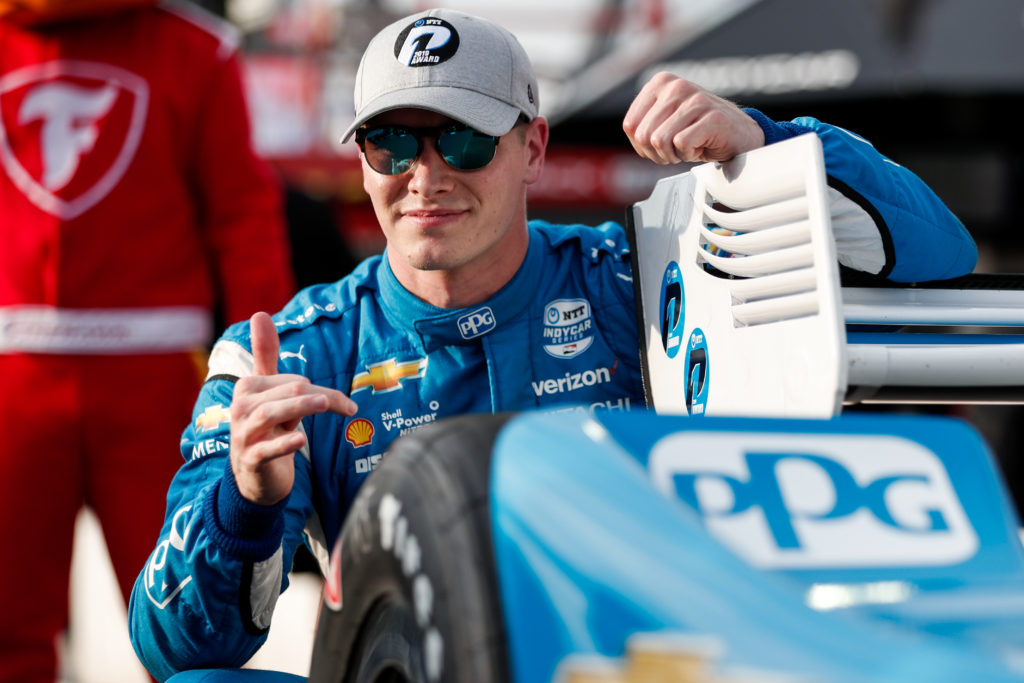 MADISON, Ill. (August 24, 2019) – In a season where every championship point figures to matter in determining the winner, Team Penske’s Josef Newgarden was pleased to add another point in NTT P1 Award qualifying Friday at World Wide Technology Raceway at Gateway.

Newgarden earned the NTT IndyCar Series point by winning the pole for Saturday night’s Bommarito Automotive Group 500 presented by Axalta & Valvoline. Although INDYCAR doesn’t officially award qualifying points until the conclusion of the event, Newgarden effectively has a 36-point lead over Andretti Autosport’s Alexander Rossi in pursuit of his second series championship. Rossi will start 11th in the No. 27 NAPA AUTO PARTS Honda.

Newgarden won the Gateway race in 2017 on his way to his first season title. He hopes to convert another strong performance Saturday night in the No. 2 PPG Team Penske Chevrolet.

“We’ve only gone through half the journey this weekend,” Newgarden said of the race to come. “We need to go through the race simulation and then see where we really end up. But I feel pretty confident that the PPG car is going to be strong and Chevy has obviously done (its) homework and given us a great package.”

Newgarden posted a two-lap run around the 1.25-mile, D-shaped speedway at 48.2554 seconds, an average of 186.508 miles per hour. That gave him his second pole of the season – the first came in the second race in Detroit on June 2 – and gave him eight for his INDYCAR career.

Newgarden’s effort as the final qualifier denied Sebastien Bourdais of Dale Coyne Racing with Vasser-Sullivan his 35th career pole. The four-time Indy car champion will start on the front row for the first time this season and helps take the sting out of crashing on the opening lap of last year’s race here.

Bourdais’ qualifying average was 185.927 mph (48.4062 seconds) in the No. 18 SealMaster Honda. He thought it might be good enough for the pole, but then rookie teammate Santino Ferrucci approached him.

“He just told me before (Newgarden ran) ‘That pole will be yours,'” Bourdais said. “I told him, ‘Man, you just jinxed it.'”

Pagenaud, who is third in the standings with three races to go, now has a 41-point deficit to Newgarden. Chip Ganassi Racing’s Scott Dixon, who qualified eighth (184.293 mph, 48.8354 seconds), trails by 53 points.