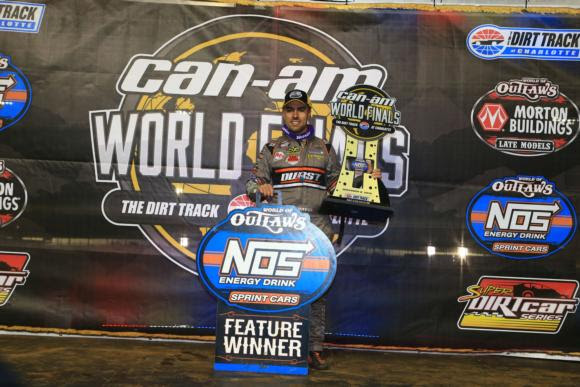 CONCORD, N.C. (Nov. 8, 2019) – With a breathtaking championship battle unfolding behind him, David Gravel made sure no one was in front of him on Friday at the Can-Am World Finals at The Dirt Track at Charlotte. Amid the excitement befitting a sold-out World Finals crowd, Gravel led title contender Donny Schatz to the finish line to capture his 50th career victory in the World of Outlaws NOS Energy Drink Sprint Car Series.

Gravel joined Chris Madden and Jimmy Phelps as the three feature race winners before a packed house at The Dirt Track at Charlotte. The Can-Am World Finals draws to a close with three feature races concluding an unforgettable weekend of racing on Saturday night.

Gravel won for the 11th time this season and second time at The Dirt Track at Charlotte. He also won on the four-tenths-mile oval two years ago, but it was Win No. 50 that was most special.

“We had a couple goals, and I really wanted to get to No. 50 this year,” Gravel said. “That is one of my accomplishments I wanted to do. I couldn’t do it without this team. … We’ve still got one more race to go, and hopefully we can sweep the weekend. This is a good start.”

Gravel had just been passed by Aaron Reutzel on Lap 12, but Reutzel immediately had an issue with lapped traffic as Gravel went back to the top spot.

“I got a couple lucky breaks,” Gravel said. “I made a mistake there getting into lapped traffic, and Reutzel passed me. Luckily, he went high and Dave Blaney went high – and the bottom opened up and I was able to get the lead back.”

Schatz closed on Gravel in the closing laps but couldn’t make a move. Still, he chopped six points off Sweet’s lead heading into the season finale on Saturday. With two points separating every finishing position (except first to second, which is four), Saturday’s feature should be spectacular from green to checkered.

“It got close – just not good enough,” Schatz said. “That’s how it goes some days. We’ll do our best tomorrow. We’ve got one more day to go, and we’ll just make the best of it.”

Chris Madden helped Scott Bloomquist Racing smoke the field in the World of Outlaws Morton Buildings Late Model Series feature. Madden, nicknamed “Smokey,” grabbed the lead on a restart with 19 laps to go and held off car owner Bloomquist to secure a memorable 1-2 finish for the team.

Madden won for the 22nd time in his career in the World of Outlaws Morton Buildings Late Model Series and for the fourth time at The Dirt Track at Charlotte.

Madden, Bloomquist and Jonathan Davenport battled for the lead most of the second half of the 50-lap feature. The trio caught lapped traffic in the final laps, but Madden held them off.

“(The track surface) had rubbered up there at the end,” Madden said. “I stayed back as far as I could off those (lapped) guys. I just needed to keep me some room there and make sure I didn’t scoot out of the rubber and just get it done.”

After collecting the trophy, Madden saluted the legendary Randy Sweet, who passed away Friday.

Jimmy Phelps secured his first Super DIRTcar Series big-block modified victory of the season in that class’ 40-lap feature. Phelps led the final 18 laps after then-leader Billy Decker was forced to the pits with a flat left-rear tire.

Phelps earned his second career victory at The Dirt Track at Charlotte, repeating his success at America’s Home for Racing in November 2010.

“We weren’t re-starting the greatest, but once we got rolling, it seemed like we were pretty good,” Phelps said. “It’s a Catch-22, because we went on those long green-flag runs early and then the leaders got tore up in traffic. I guess it was what it was; it worked out.

“The car was super. These guys busted their butts. It’s a new car; it’s got one other race on it, and I’m tickled pink. The thing was great. I can’t thank them enough.”

With clear skies in Saturday’s forecast and sold-out reserved seating, race fans from all 50 states and nine countries – as far away as Tanzania and New Zealand – will attend the capper to this weekend’s three-day spectacular of dirt-flying, championship-deciding excitement.