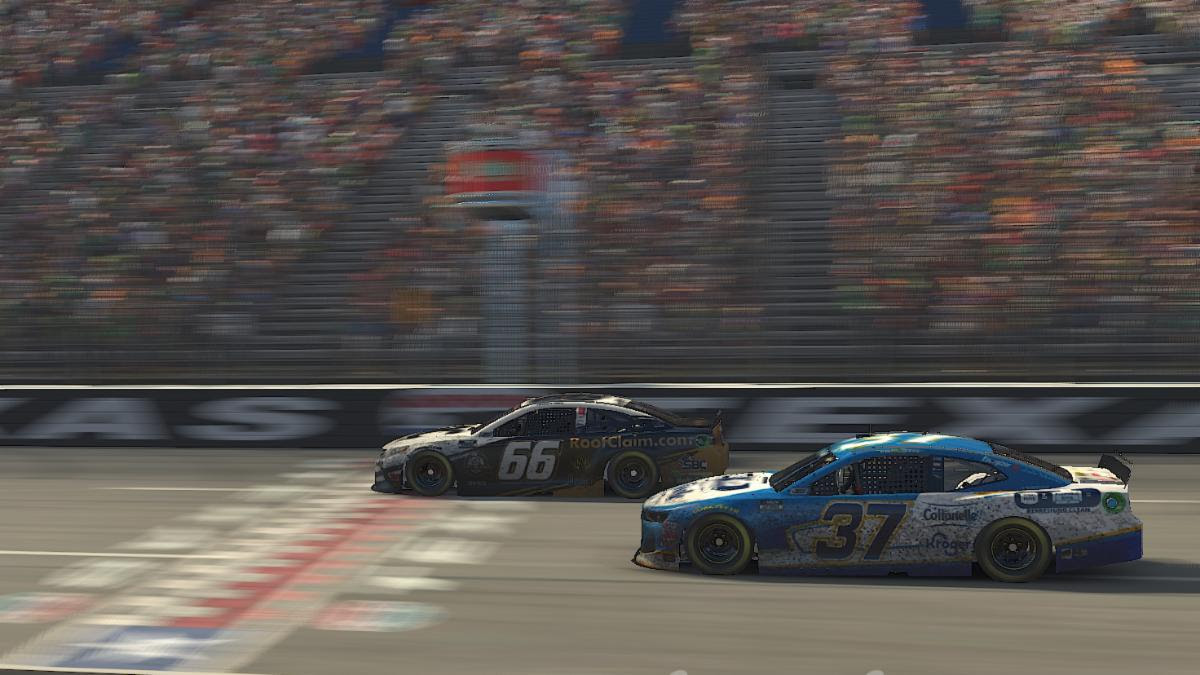 FORT WORTH, Texas (March 29, 2020) – Journeyman NASCAR Cup Series driver Timmy Hill used his extensive success in iRacing to hold off Ryan Preece and take the checkered flag in overtime in the eNASCAR iRacing Pro Series Invitational O’Reilly Auto Parts 125 at virtual Texas Motor Speedway.
Hill put a bump-and-run move on pole winner and race leader William Byron in Turn 2 with four laps remaining in the 125-lap race. The Port Tobacco, Md., native then kept his virtual No. 66 Toyota ahead of a ferocious charge from Preece, Garrett Smithley, and Landon Cassill to cross the finish line first by 0.050-of-a-second in the green/white/checkered finish.
“Hey, how about that,” said Hill, who was interviewed while performing celebratory burnout donuts at the start/finish line by FOX announcer and four-time NASCAR Cup Series champion Jeff Gordon. “That was exciting. I can’t believe it. It was such a fun race. I had to do a little boot-scootin’ boogie here in Texas with Willy B (Byron) but I’m glad to pull the victory off for Roof Claim, MBM Motorsports and everybody back home.
“It means so much,” said Hill when asked how special the victory was to him. “I’ve got a tremendous amount of fans and friends and family that have all reached out to me, really congratulating me for the recognition that we’ve been getting. Our team, myself, and our sponsors … a lot of time we don’t get that recognition so, to finally kind of capitalize on that, pull off a win here in iRacing … I’m glad that iRacing, FOX and NASCAR really let us do this because it’s a tremendous feeling. The amount of messages I’ve already gotten, my phone is blowing up, I see we’re trending on Twitter, it’s just a really nice feeling. I’ve been in this sport for 10 years now. This is my 10th season in NASCAR. This is a win so it’s really neat to get this and hopefully we can pull some wins off when we come back racing in the real world.”
The O’Reilly Auto Parts 125, which was broadcast on FOX, FS1 and the FOX Sports app, was the second race of the eNASCAR iRacing Pro Series Invitational after the NASCAR Cup Series season was postponed after four races due to the COVID-19 pandemic. The O’Reilly Auto Parts 500 weekend at Texas Motor Speedway will be rescheduled.
Prior to the start of the FOX broadcast which began at 1 p.m. ET, Texas Motor Speedway’s Facebook page hosted the ROXOR Loud & Proud Pre-Race Show with country music artist Sam Riggs.
The broadcast kicked off with Bob Weir, a member of the legendary band The Grateful Dead, singing the National Anthem. Another legend, three-time Super Bowl winner and former Dallas Cowboys quarterback and FOX NFL analyst Troy Aikman, served as the virtual grand marshal for the O’Reilly Auto Parts 125, calling on the drivers to start their engines.
Byron started from the pole alongside Dale Earnhardt, Jr., and kept the lead early before being overtaken by John Hunter Nemechek. Byron took back the lead with just less than 100 laps remaining.
The lead bounced between Byron, Nemechek, Chase Elliott and last week’s winner at virtual Homestead-Miami Speedway, Denny Hamlin.
Byron was the class of the field and looked to be headed to victory lane with 10 laps remaining before consecutive caution periods bunched the field.
Hill, who started 10th and had run up front all day, got Byron loose and took the lead with four to go before the final yellow slowed the field and forced the overtime finish.
Alex Labbe won the last chance qualifying race to transfer into the O’Reilly Auto Parts 125 along with second-through-fourth-place finishers Anthony Alfredo, Ty Majeski and Ruben Garcia Jr.
There were 16 lead changes among nine drivers and five cautions for 21 laps.
Tags: eNASCAR iRacing Texas Motor Speedway Timmy Hill