News Ticker
There were thrills and spills, post-race penalties and a mixed bag of results for the favourites in the inaugural round of the BP Supercars All Stars Eseries.

After a highly entertaining night of racing for sport starved fans who tuned in globally, it was two-time defending Virgin Australia Supercars Champion Scott McLaughlin who came out on top, winning two out of three races in his virtual Shell V-Power Ford Mustang.

The opening race at Phillip Island’s scenic circuit, McLaughlin got the jump from third on the grid and went straight to the lead, pole sitter Anton De Pasquale had a nervous start and collided with McLaughlin early. That caused damage and forced De Pasquale back to 14th while McLaughlin pushed ahead to open up an handy early lead.

McLaughlin’s Shell Ford teammate Fabian Coulthard made the early moves, jumping from 10th to 2nd position in the opening laps.

From there McLaughlin led the rest of the way and claimed the first-ever BP All Stars Series race win, teammate Coulthard finished second and rounding out the all Ford Mustang driver podium was Tickford’s Monster Energy driver Cam Waters. 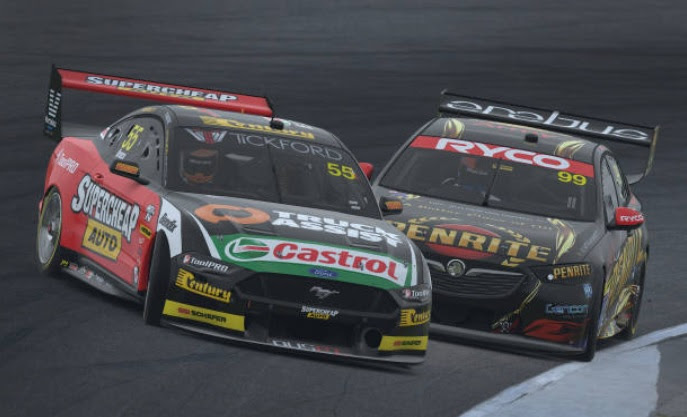 It was a reverse grid for the second race of the night, with the Castrol Racing’s Ford of former Supercars Champion Rick Kelly starting from pole position after he crashed out of the opening race, starting alongside Supercheap Auto Ford’s youngster Jack Le Brocq.

Le Brocq got the jump on the Supercars veteran off the start line and led the pack into the opening corner. Bathurst winner Dave Reynolds, who dressed as Super Mario pre-event, moved into second position early as the competition heavyweights of McLaughlin, Shane van Gisbergen and De Pasquale made their way from the back of the pack.

Van Gisbergen, who raced from his home in New Zealand, had a huge crash which ripped the wing off his Red Bull Holden Commodore on the opening lap.

After starting from the rear of the field, De Pasquale and McLaughlin both went for an early pit stop and it helped the pair moved through the pack. Chaz Mostert, who is only new to online racing – showed practice makes perfect, applying pressure to De Pasquale through the middle-stages.

De Pasquale made his way into second position and on the final corner made a move on the inside of Le Brocq. The pair collided before the #99 Penrite Commodore of De Pasquale led the field across the finish line claiming the provisional victory.

That was until Driving Standards Advisor Craig Baird handed down a penalty for the move. That meant a 30-second post-race penalty for De Pasquale, and race victory for Le Brocq. Mostert was awarded second place and his Walkinshaw Andretti United teammate Bryce Fullwood finished third. 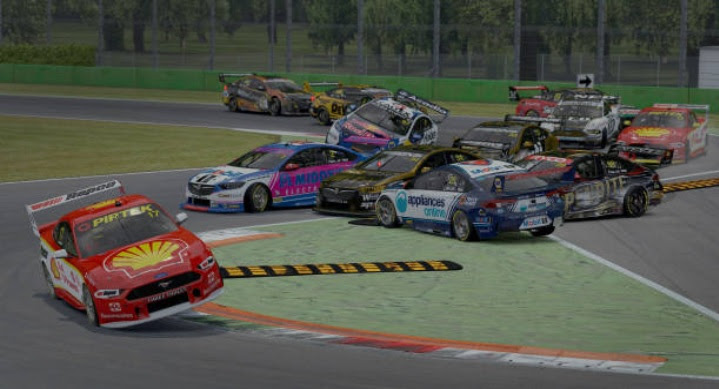 Race Three staged at a virtual Monza, Italy got off to a chaotic start, with cars crashing into each other like pinballs making the circuit an iRacing carpark the opening corner. McLaughlin who started from second avoided the early drama to jump to an early lead.

After the carnage which took out almost half the field, the first virtual Vodafone Safety Car came out and it was Cam Waters who came out as the surprise leader.

On the restart when all cars were good to go, McLaughlin re-started back in 11th position.

The two-time defending Supercars Champion then made his way through the pack, picking off other drivers one by one, before he took back the race lead off Waters with two laps to go.

He would go on to claim the inaugural race win in Italy, with Waters finishing second and Mostert third.

Round two next Wednesday night will see drivers head to virtual Europe circuits, first the renowned Silverstone followed by Barcelona in Spain.

The Virgin Australia Supercars Championship battle between Shane van Gisbergen and Scott McLaughlin went to another level on the streets of Surfers Paradise at the Vodafone Gold Coast 600. McLaughlin had promised to turn the […]

Supercar superstars fight to the end at Albert Park