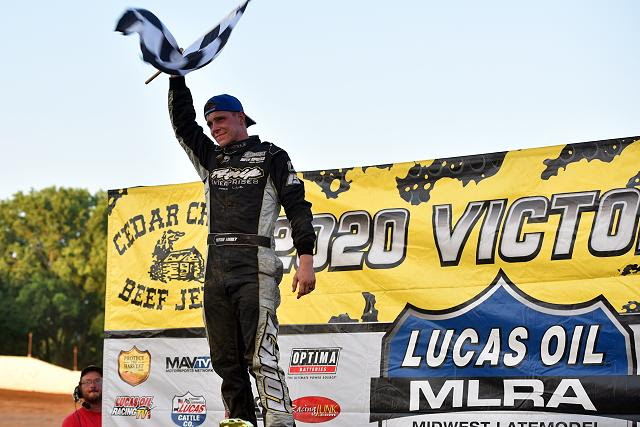 FOR IMMEDIATE RELEASE
East Moline, IL (July 5, 2020) – For the second time in as many nights, Payton Looney moved to the point and didn’t look back as he collected his third career Lucas Oil MLRA win in the “Bullring Bullseye 40” at The Bullring at the Rock Island County Fairgrounds.
Originally slated for 40 laps, the first annual event was bumped to 44 laps in honor of late model racer Shaune Lewis, who passed away on Friday night at the Davenport Speedway. At the drop of the green flag it was Tony Toste driving to the lead from his outside front row starting position over Dirtondirt.com Pole sitter and Slick Mist Fast Time award winner Bobby Pierce. Pierce set the fast time with a lap of 13.584 seconds in a back-up car, after having mechanical issues in hot laps.
Toste would show the way on the top side until a slight bobble in turn four sent Pierce to the point on lap seven. Pierce quickly stretched out the advantage at the point with Looney and Toste in tow. As Pierce crossed the stripe on lap 24 he began to slow and fell into the grasp of the Capital Chassis of Looney. Looney would drive by for the lead as the yellow flew on the next lap as Pierce slowed in front of the field down the front stretch. A broken rear axle would signal the end of the night after what looked to be a promising night for Pierce.
With the green back in the air, Looney went back on the charge, going the distance to collect the feature win and stretch out his lead atop the Midwest Sheet Metal Point Leader Challenge standings. Thanks to $1,000 from Doug Curless and $250 from the family and friends of Shaune Lewis, Looney pocked $6,260 for his efforts.
Justin Duty, charged all the way from 16th on the grid to snag second at the line over Jeremiah Hurst who advanced from the 10th starting spot. Toste came home in fourth for his second top five of the season, while Garrett Alberson rounded out the top five.
Looney commented on Pierce’s troubles in Cedar Creek Beef Jerky Victory Lane by saying, “I hate it that the 32 broke because I felt like I had just got my rhythm and I was catching him a little bit every lap. I wish he could have raced it because this isn’t my forte at all. Anybody that knows me knows that I’m not usually up on the cushion like that. I guess it’s just a testament of how far we have come and how much we have grown.”
Hurst challenged for the win late on one of his favorite tracks, but came up just short of his first MLRA win. Looney said of the battle with Hurst, “He has raced me clean all year and I could see him down there exciting two, but as long as he wasn’t going to go in there and dirt me I knew I would be all right. I had that line figured out really good there in three and four where I could kind of enter high and run down across the race track. I really think that’s where I made up all my time”
The runner-up finish for Duty netted him the Sunoco Race Fuel Rookie of the Race as well as the Casey’s Hard Charger Award. “We just had to bide our time there, we were tight early after they prepped the track and it just took a little time to get where we needed to be and once we got into a rythm I felt like we were really good,” commented Duty. “I hated to see all those cautions at the end, but we were just able to squeak by Jeremiah there at the line and get a good run. We have had a bunch of struggles this weekend, so this is a good way to end the weekend.”
UP NEXT: The Lucas Oil MLRA will next head to the confines of the Lucas Oil Speedway in Wheatland, Missoui for the series biggest weekend of the year. Saturday night July 18th will feature the one-day addition of the $20,000 to win “Show-Me-100”. The two-day weekend at the Diamond of Dirt Tracks wraps up on Sunday July 19th with the $12,000 to win “Diamond Nationals”. Both events will be co-sanctioned by the Lucas Oil Late Model Dirt Series.
The Bullring at Rock Island County Farigrounds Contingencies 7/5/20
Slick Mist “Fast Time Award” – Bobby Pierce (13.584 seconds)
DirtonDirt.com “Pole Award” – Bobby Pierce
Allgaier Motorsports Racing Shocks Award – Justin Duty
Casey’s General Store’s “Hard Charger of the Race” – Justin Duty (+14)
Dynamic Drivelines “Crew Chief of the Race” -Jeremy Atnip
Hooker Harness “11th Place Finisher” – Daniel Hilsabeck
Midwest Sheet Metal “Points Leader Spoiler Challenge” – Payton Looney
Performance Bodies “Performer of the Race” – Payton Looney
RacingJunk.com “Hard Luck Award” – Bobby Pierce
Sunoco “Rookie of the Race” – Justin Duty
Lucas Oil Racing TV A Feature (44 Laps): 1.Payton Looney 2.Justin Duty 3.Jeremiah Hurst 4.Tony Toste 5.Garrett Alberson 6.Brian Shirley 7.Mike Chasteen Jr. 8.Chad Simpson 9.Tony Jackson Jr. 10.Mike McKinney 11.Daniel Hilsabeck 12.Brennon Willard 13.Bobby Pierce 14.Jason Papich 15.Allen Wiesser 16.Travis Denning 17.Tegan Evans 18.Jonathan Brauns 19.Jeremy Conaway 20.Gary Webb 21.Mike Guldenpfenning
Cedar Creek Beef Jerky Heat 1 (10 Laps): 1.Bobby Pierce 2.Payton Looney 3.Brian Shirley 4.Jeremiah Hurst 5.Tony Jackson Jr. 6.Justin Duty 7.Tegan Evans
Casey’s General Stores Heat 2 (10 Laps): 1.Tony Toste 2.Chad Simpson 3.Daniel Hilsabeck 4.Travis Denning 5.Mike McKinney 6.Gary Webb 7.Mike Chasteen Jr.
Sunoco Race Fuels Heat 3 (10 Laps): 1.Jonathan Brauns 2.Garrett Alberson 3.Allen Wiesser 4.Jason Papich 5.Jeremy Conaway 6.Mike Guldenpfenning 7.Brennon Willard
Tags: Lucas Oil MLRA