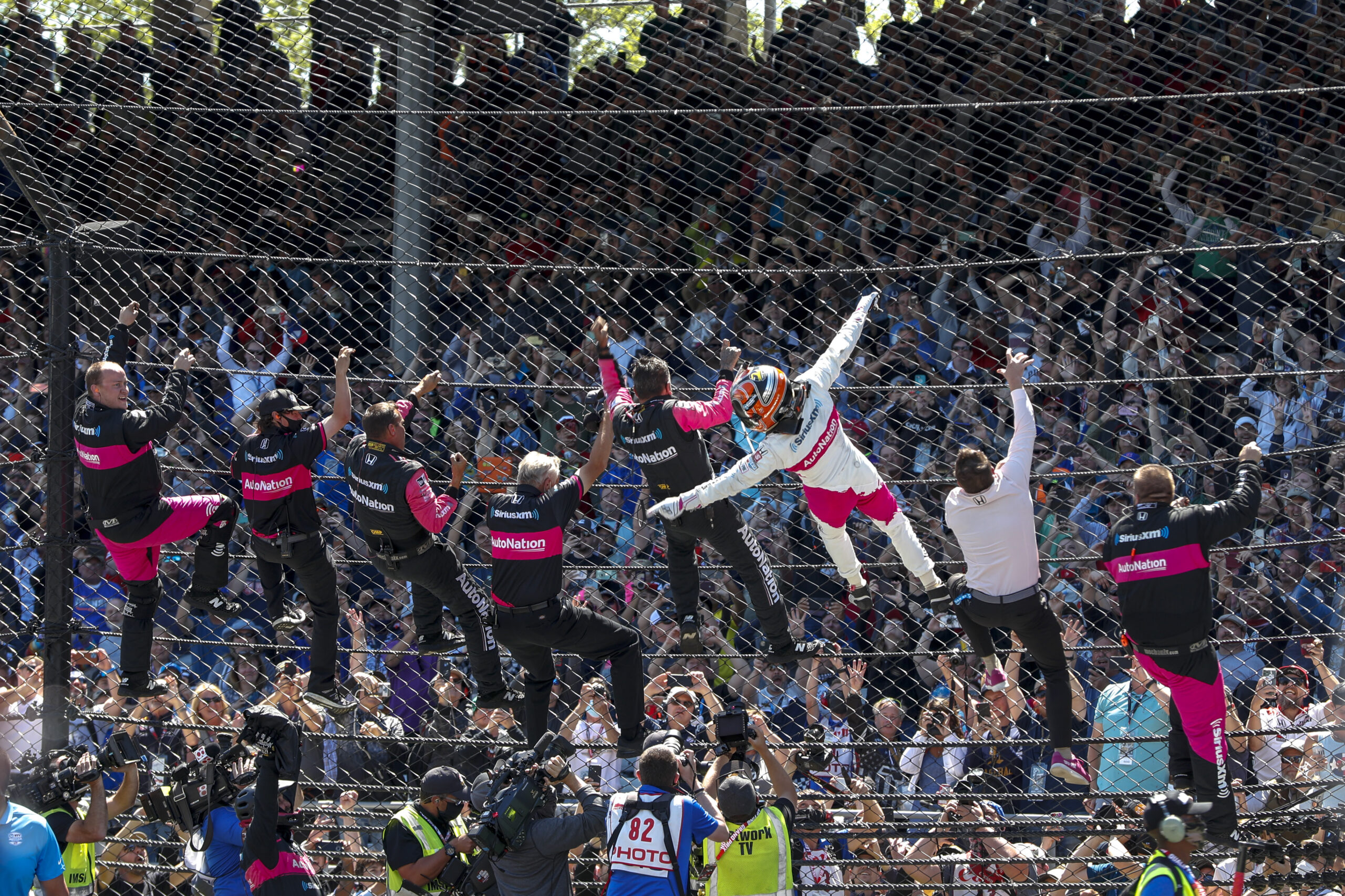 Indianapolis, Ind. (30 May 2021) – Meyer Shank Racing driver Helio Castroneves won his fourth Indianapolis 500 on Sunday. The popular Brazilian racer started the race from eighth on the grid and moved up to take the lead on lap 37.

Saving fuel early in his run, Castroneves raced in the top seven through the majority of the race, racing to the lead on lap 72 under green flag conditions. Holding the lead once again on a lap 126 restart, Castroneves pitted from the lead for the final time on lap 172, with the Meyer Shank Racing squad delivering a final well-executed pit stop on the day to position him for a fight to the finish.

The race set a record as the fastest Indianapolis 500 in history, with Castroneves fighting for the lead with Alex Palou through a frantic final 20 lap segment. Taking the point for the final time on lap 198, Castroneves held firm at the front to take an amazing fourth victory in the race to the roaring approval of 135,000 enthusiastic race fans as he returned to climb the fence at the Indianapolis Motor Speedway once again.

“I love Indianapolis!” enthused Castroneves. “This is incredible. I had to put my elbows up to fight there at the end. Meyer Shank Racing gave me everything I needed to go fight for the win. Thank you so much to Jim (Meyer) and Mike (Shank) for giving me this chance, and to AutoNation and SiriusXM for supporting us. It was so great to be powered by Honda today. We had such an amazing car and the team did an unbelievable job. I can’t believe it!”

The victory marks an incredible new highlight for the team, which is based in Columbus and earned success in sports car racing with victories in some of the sports biggest events including the Rolex 24 At Daytona and Petit Le Mans before expanding to compete in IndyCar with a one-off Indianapolis 500 outing in 2017.

With Jim Meyer joining Shank in an ownership role in 2017, the team grew the program in partnership with AutoNation and SiriusXM to contest partial IndyCar seasons in 2018 and 2019 before making its first full-season campaign with Jack Harvey in 2020. Castroneves joined the team ahead of the 2021 season for a 6-race campaign starting with the Indianapolis 500.

“I don’t even know where to start,” said team co-owner Mike Shank. “Helio drove an incredible race-his experience in this race was there for all to see. I’m so proud to have the partnerships that we’ve built to get to this point. That starts with Jim (Meyer), who has made such an impact on this organization since coming on board and goes to AutoNation and SiriusXM, and of course Honda and the folks at HPD have been just amazing. This is going to take a long time to soak in, but right now I just am a little at a loss for words to be standing here right now after winning the Indianapolis 500!”

The sister No. 60 AutoNation/SiriusXM Honda-powered entry of Jack Harvey finished a disappointed 18th. After starting from 24th on the grid, Harvey raced his way to the top ten but lost ground during a lap 142 pit stop before fighting back to finish 18th.

“First off, congratulations to Helio, what a legend,” said Harvey. “And also to Mike Shank, and Jim Meyer, they have built a very strong team and that showed today with this big result. Unfortunately my race didn’t go as well as he had hoped and we don’t have the result we were looking for. So it was a disappointing day for us, but overall I’m so proud of this team and thrilled for AutoNation, SiriusXM, and everyone involved.”