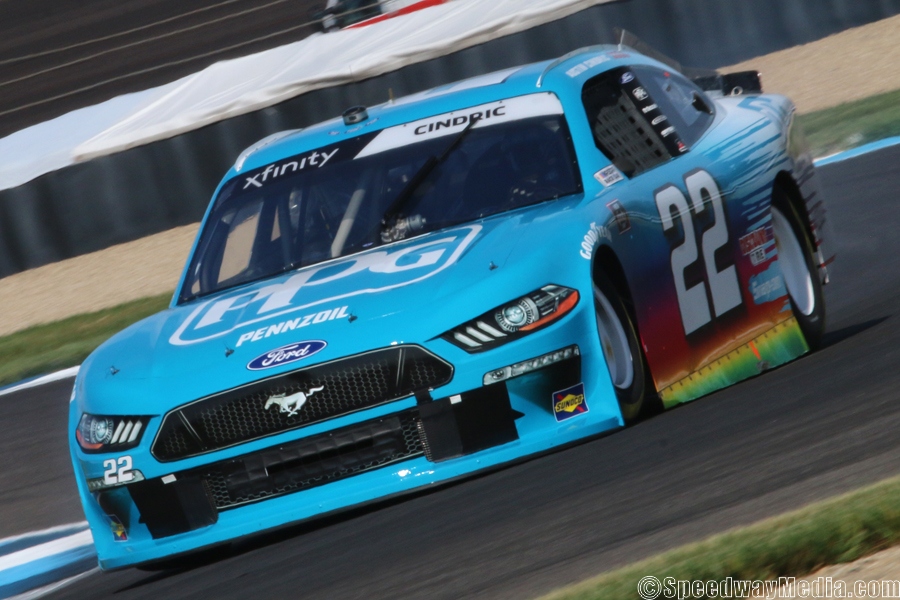 Photo by Simon Scoggins for Speedwaymedia.com

Austin Cindric won Satruday’s Pennzoil 150 at the Brickyard. This was Cindric’s fifth victory of the season and the 13th of his career while singing “Back Home Again in Indiana” during the victory lap. “I didn’t even know I knew the words that well or could remember them that well. Hopefully I didn’t make Jim Neighbors roll over in his grave. I was here the last time he sang the song and it gives me goosebumps every time.” Cindric said.

Cindric led 29 of the 62 laps on the 14-turn, 2.439-mile road course and the final 17 laps in his No. 22 PPG Ford. Cindric was able to “kiss the bricks” for the first time at Indy. “Today was a first, absolutely. That is what winners do and I am just a fan whenever I was watching him race. It has been cool to be a part of that and see some of that, but you see a lot more losers here than you do winners.” Cindric said.

Cindric remains the series leader in the driver standings by 82 points ahead of AJ Allmendinger.

“First of all, I’ve got to thank Roger Penske for every opportunity I’ve had in my career, every opportunity he’s given you race fans to enjoy this beautiful weekend. I’m so proud of be part of this Penske family and thanks to PPG, Ford and everybody that has put so much into my career.” Cindric said.

Chase Elliott substituted for Michael Annett in the JR Motorsports No. 1 Chevrolet finished in fourth place despite only having a few hours notice of the opportunity. “I was actually still asleep this morning when I got the call.” Elliott said.