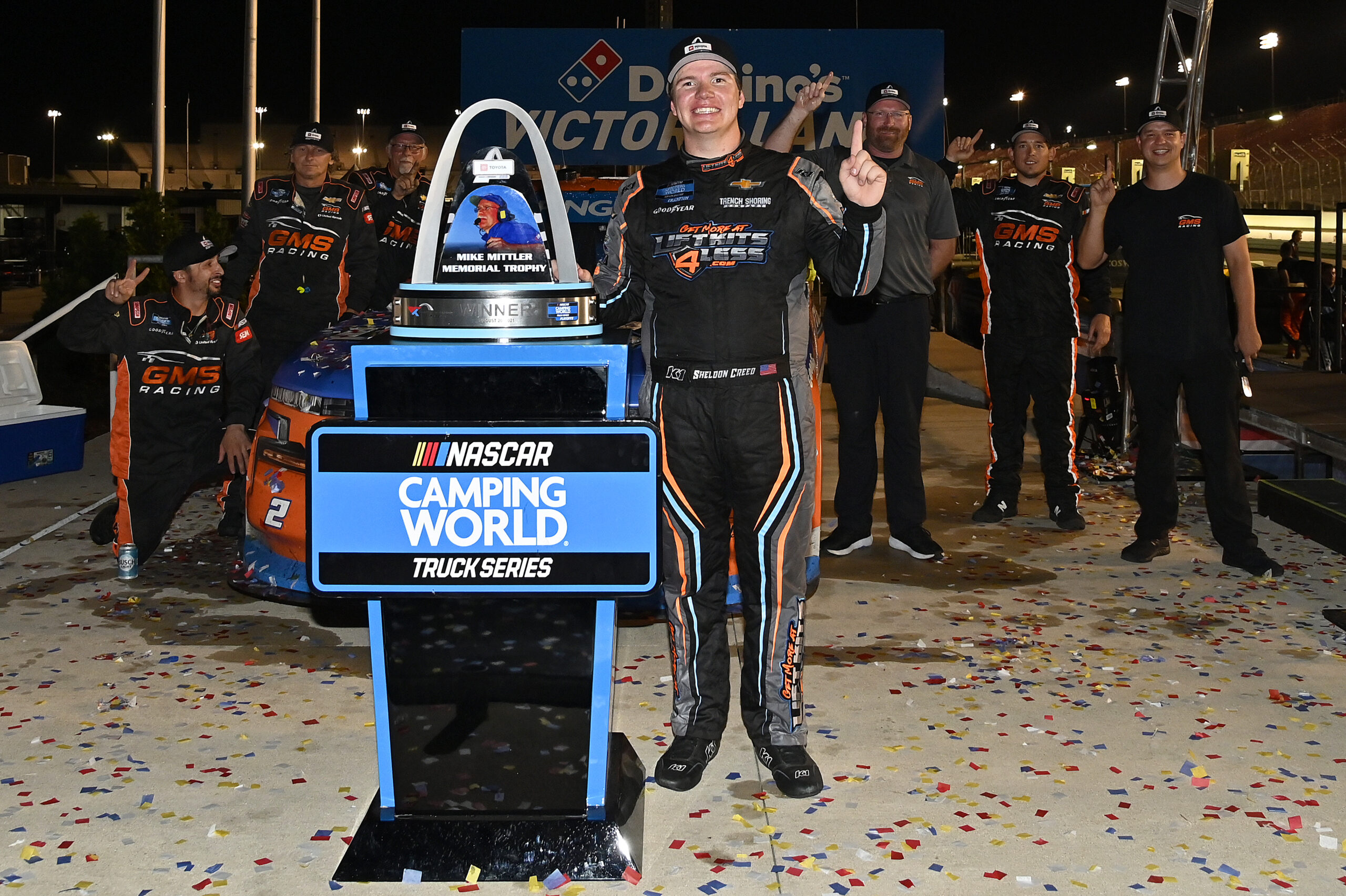 And while the evening went relatively straight-forward for the defending series champion Creed in his winning-performance, the race was full of storylines elsewhere from a nearly one-hour red flag delay when the track lost power to a multi-truck accident shortly after that derailing championship-eligible drivers such as Todd Gilliland and Austin Hill.

Ultimately the Californian Creed, 23, beat fellow Playoff driver Matt Crafton to the finish line by .292-seconds in that overtime period. It is Creed’s second win of the season and seventh of his career.

“My guys put together such a good truck” said Creed, who drives the No. 2 GMS Racing Chevrolet. “We’ve been working hard all year and obviously haven’t had the speed at times and I’ve made mistakes at times. But we were able to build this brand new truck and I feel like we’ve taken everything we’ve learned this year and applied it. They gave me a hot rod today and I couldn’t be happier.

“I love late-race restarts. I didn’t want it, but when it came out I was just thinking, okay, just focus and execute.”

“This is huge,” he added. “I’ve had such a stressful month trying to figure out what I’m doing next year, so many mixed emotions on what I’m going to do and if I’ll even have a ride. Biggest thing is to keep winning and get ourselves in the Championship 4 and execute.”

Six of the 10 Playoff trucks experienced some type of issue during the race from championship leader Nemechek, whose No. 4 Kyle Busch Motorsports Toyota experienced two big setbacks to rookie Hocevar whose rally at the end was a huge testament to his determination.

With 31 laps remaining the series’ best five-race winner and championship leader Nemechek had to take his truck behind the pit road wall briefly with a brake issue. The team replaced a brake rotor and he returned to finish the race. Only less than 15 laps earlier, his truck suffered some rear end damage slowing briefly on-track with a power issue and getting hit from behind.

Despite the trouble Nemechek retains his points lead – a three-point edge over Rhodes in third in the Playoff standings while Creed’s victory was an automatic bid into Round 2 of the NASCAR Camping World Truck Series’ seven-race Playoff schedule.

Crafton and Friesen are ranked fourth and fifth in the standings. Hill, who finished 23rd, is ranked sixth. Hocevar and Todd Gilliland, who finished 29th, are ranked seventh and eighth – the last Playoff transfer position.

The series races next on Sept. 5 in the In It To Win It 200 at Darlington (S.C.) Raceway (1:30 p.m. ET on FS1, MRN, SiriusXM NASCAR Radio). Creed scored his other win this season at Darlington this Spring.